The Curator of Schlock #252

A Wish for Christmas

Be my most tasty little dish!

Thus begins week 2 of our Hallmark Christmas Movie Yuletide Extravaganza. I love these movies. They’re like the cozy sweater vest of American cinema. If only they would have a marathon of them in an IMAX theater. I want that full immersion experience in 3D, 4K, and Smell-O-Vision. I want it all! But for now, I have to settle for a 1K, no 3D, and no smells.

Tonight’s Hallmark movie is 2016’s A Wish For Christmasfrom director Christie Will Wolf. This is not to be confused with Hallmark’s A Christmas Wish from 2011. Totally different movie. That one starred Kristy Swanson and was directed by Craig Clyde. We will not be getting to that one this year because we’re only covering the Hallmark Christmas movies featuring Lacey Chabert. That’s right. We’ve got two more weeks of Lacey Chabert so brace yourself.

In A Wish For Christmas, Lacey Chabert plays Sara Thomas, a web designer for an advertising firm out in Chicago, IL. Sara’s Achilles’ heel is that she is a bit on the wishy-washy side. By wishy-washy, I mean she lets everyone at the firm walk all over her. At the company Christmas party, her manager takes all the credit for her Christmas 365 ad campaign, a campaign centered on feeling the Christmas spirit everyday of the year. His name is Dirk, and he’s a bit of a jerk. The head of the company, Peter Williams (Paul Greene), is very impressed by Dirk’s idea which is too bad because Peter is very handsome and Sara has a bit of a crush on him. If only Peter knew it was Sara’s idea.

Sara decides to leave the party, but runs into a man dressed like Santa Claus in the lobby. He asks her what her Christmas wish would be. Sara says she wishes she had the courage to stand up for herself. Santa says he and the elves might have some difficulty with that. Wouldn’t she rather have a million dollars? Nope. Sara insists on getting courage for Christmas. Personally, I would have picked the million dollars. Then I could just hire some guys to beat up Dirk. Anyway, the wish works because Sara tells off Dirk in front of everyone at the party, saying how he stole her ideas. For shame! 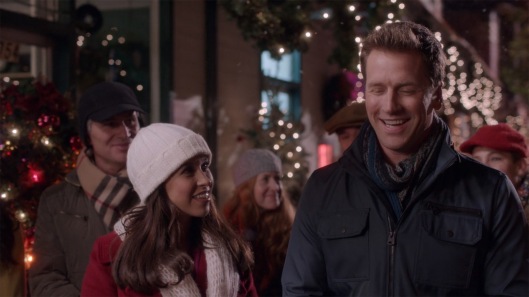 Sara almost quits the firm altogether when dreamy Peter Williams gives her a promotion and wants her to travel with to Seattle to pitch her idea to some big wig named Wilson. Upon arriving in Seattle, they learn that Wilson cancelled their meeting because he decided to go with another firm’s ad campaign. Sara is having none of that, insisting that Wilson hear their pitch since they flew all that way. Wilson’s secretary manages to reschedule the pitch for the next morning, but Sara and Peter will have to journey to a small town in northern Washington to meet Wilson. In a bit of a twist, this small town just happens to be Peter’s hometown.

Let’s see. What else? Peter hates Christmas because he had a falling out with his dad one Christmas years ago when he decided not to follow in his dad’s footsteps and become a lawyer. Sara manages to use her newfound courage super power to coax Peter to visit his family, decorate some Christmas cookies, and patch things up with his dad. But will Sara’s newfound courage power get her to sell the Christmas 365 pitch to Wilson and save Peter’s company? Or will Sara find that she had the courage deep inside her all along? Is anyone still reading this?