The Curator of Schlock #259 by Jeff Shuster

The House on Sorority Row

Don’t throw your KFC in the swimming pool!

Back in October, I partook in a special screening of The House on Sorority Row at my local Regal Cinemas. I wanted to know what it would be like to see an 80s slasher movie for the first time on the big screen. What drew those original audiences to see these movies? Is there something about the big screen that changes the way one views them? Are they more suspenseful? Are they more terrifying? 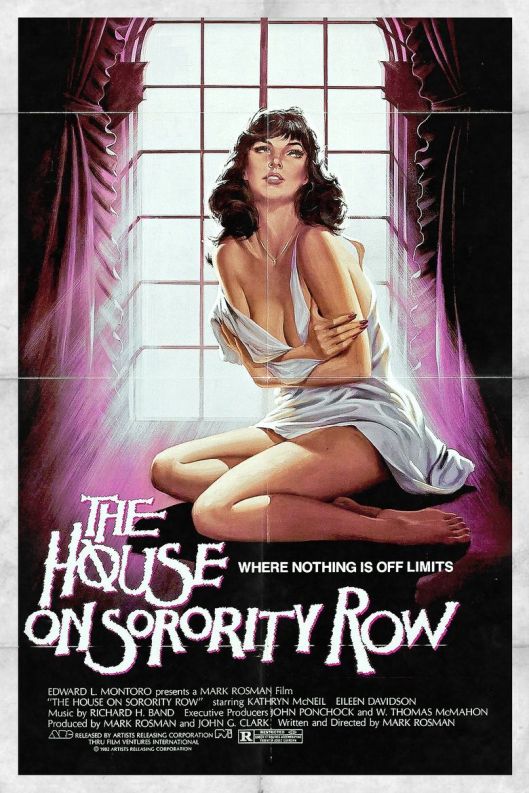 I don’t get the allure. Maybe one had to be alive at the time when these taboos were being broken. This is not to say 1982’s The House on Sorority Row from director Mark Rosman is a waste of time. Any movie that features a fight between a final girl and a maniac dressed like a jack-in-the-box can’t be that bad. Said final girl is Katey Rose (Katherine McNeil), a pretty, but boring college grad, ready to say goodbye to her sorority house and sorority sisters of the past four years. 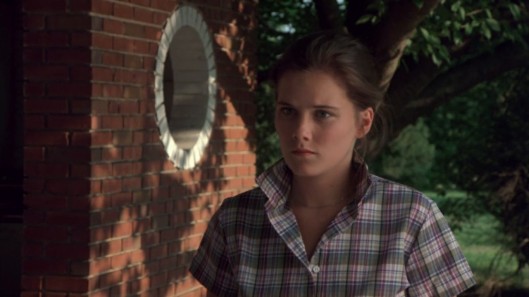 The sorority plans to throw a graduation party to celebrate, a rollicking romp featuring a live band in the form of 4 Out of 5 Doctors! Any of you go to their reunion concert at the Jammin Java Club in in Vienna, VA? I did. Jealous much?

Standing in the sorority’s way is Mrs. Slater (Lois Hunt), their house mother and a real battle axe who’s no rock n’ roll fun. She screams at the girls for drinking champagne in the house and won’t allow them to throw their going away bash. When Mrs. Slater catches one sorority sister named Vicki (Eileen Davidson) getting intimate with her boyfriend in a waterbed, Mrs. Slater takes her cane with the metal tip in the shape of a bird and punctures a hole in the plastic mattress. Mrs. Slater calls Vicki trash and Vicki vows to get even with her.

Vicki convinces the other sorority sisters to help her with a prank. She’ll fill her boyfriend’s gun with blanks and pretend to shoot Mrs. Slater, giving her the scare of her life. This plan would have worked out well if one of those blanks hadn’t turned out to be a bullet.

The girls panic, wrap Mrs. Slater up in a blanket, and dump her in the murky waters of sorority house pool, which hasn’t been cleaned for ages. Oh, well. Time to forget about the murder and enjoy the party, right?

The sorority sisters are all nervous and distracted during the party, worrying about getting caught. What they should be worried about is the psychopath about to stalk and murder each one of them.

Do you know what this psychopath does to one of the girls? Cuts her head off and sticks it in a toilet bowl. Really? That’s just in bad taste.

Talking anymore about this will spoil the picture for those inclined to solve the mystery of who the killer is. If you get Showtime, you should be able to catch this flick on there. Oddly enough, the small screen works to this film’s advantage. Maybe a decapitated head in a toilet loses its impact when it’s too large.