Comics Are Trying to Break Your Heart #16 by Drew Barth

If modern superhero comics are good at anything, it’s amalgamating. Cape comics are already deeply entrenched in popular culture and, as a result, are equally influenced by popular culture around them. And this influence can have a fun echo effect. DC Comics, for instance, has a massive archive of everything they’ve ever published for creators to peruse when they need to pull from the past to better construct their new stories. Fans love a deep pull in superhero comics—one of those old villains that no one remembers, like Kite Man, or a villain so ridiculous that no one but the bravest creator would drag them into the modern era, like Kite Man.

But influences and echoes in comics goes beyond just characters and canon. The entire format of a series can be based on older series and how they handled telling stories on an issue-to-issue basis. This is where Grant Morrison and Liam Sharp’s The Green Lantern lies in the grand scheme of superhero comics. 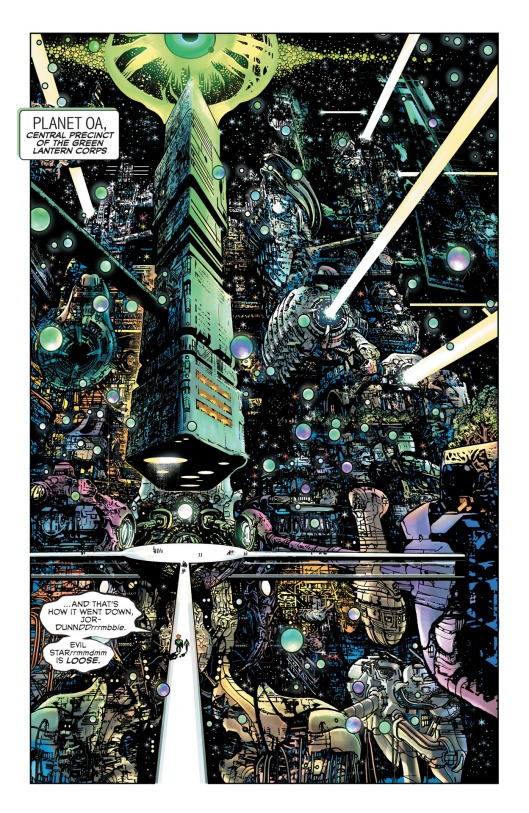 Green Lantern, as a character, is typically one of four people. While John Stewart is the most familiar Green Lantern to us who grew up on the Bruce Timm Justice League cartoons, Hal Jordan is the main focus here. And for good reason. The Green Lantern as a series has its narrative arc, its main and returning cast of characters, and a strong central villain. But what the series also has is a sense of compressed storytelling akin to some of the original Green Lantern stories by John Broome and Gil Kane. Nearly every issue has a sense of being self-contained. This kind of compressed storytelling is something Morrison worked with on his Batman & Robin series years ago with three issue story arcs, but with The Green Lantern he’s compressing that compression. 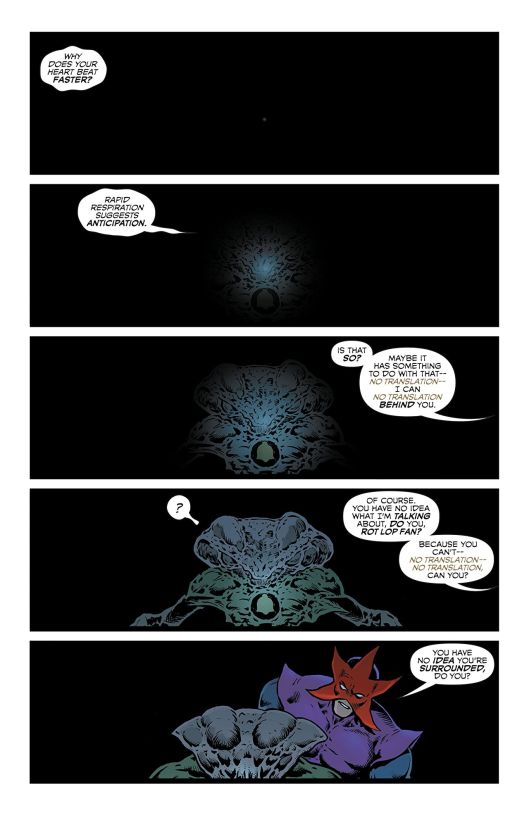 This compression, with a constant movement of story and character throughout, is honestly refreshing. If there was any one thing to bring back from older superhero stories, it’s that idea of having a story that feels nearly complete with a single issue. Some of the most famous Green Lantern stories from the fifties and sixties like “Menace of the Runaway Missile” or “The Planet of Doomed Men” are roughly ten to fifteen pages, and that’s all you need from them. Each story is a narrative piece of the overall story of the Green Lantern and contributes in some way to showcasing the character of Hal Jordan. This compressed storytelling allows creators to get out as many good ideas as possible.

And it isn’t just narrative influences that are at work in The Green Lantern. Liam Sharp’s art is, well, sharp as all hell. To look at a splash page of Sharp’s is too look at some of the most intricate and erupting with detail pages in modern comics. Art like Sharp’s is almost expected in a series like The Green Lanterndue to its sci-fi comic roots. Influences of the past percolate to the top when looking at a page like the following, 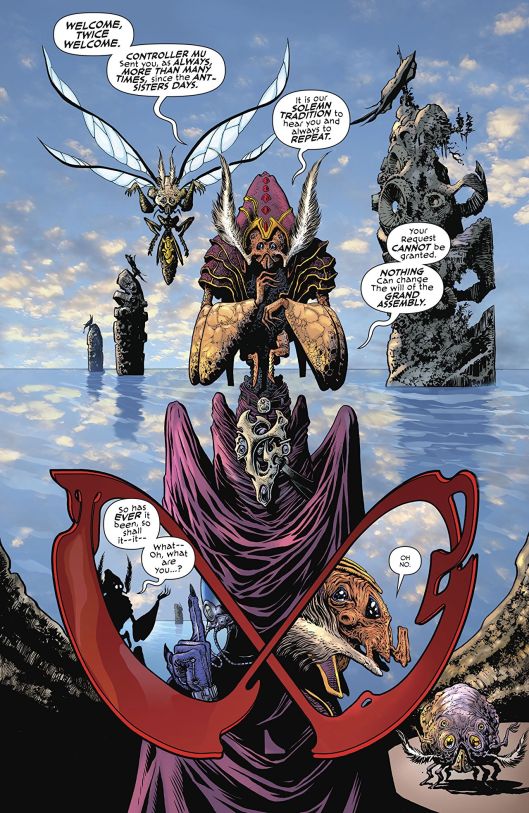 and comparing it to the work of Philippe Druillet in his Lone Sloane series. 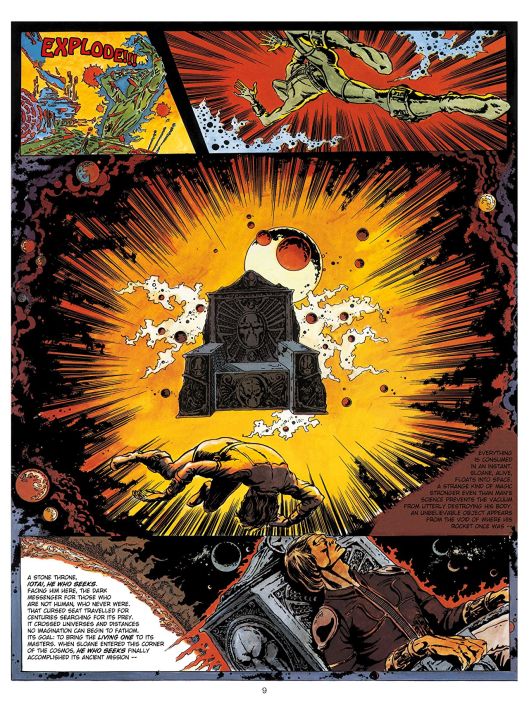 Both series are pure science fiction and alien pulp at their roots, and it is that pedigree that runs through the veins and inks of The Green Lantern. From the intricate line work to the spectacular panelling, Sharp works with a vision of the universe that is strange and inspiring. Aliens burst from each page like supernovae and populate planets that feel like living, breathing ecosystems. Sharp’s work on The Green Lantern is nothing short of pure creation like the science fiction comics that came before.

One of the best things about Morrison and Sharp’s The Green Lantern is that it is a series that is always willing to wear these influences proudly. Some fans don’t enjoy the camp or the outright weirdness of Silver Age comics at times, but that era produced stories and iconography that has lasted decades. To fully embrace old science fiction titles like Mystery in Space, Tales of the Unexpected, and Challengers of the Unknown while staying committed to the core of Green Lantern’s character as an intergalactic lawman shows just how much thought and love Morrison and Sharp put into their series. They don’t reinvent the wheel, but they do make it better.

Get excited. Space is the place. 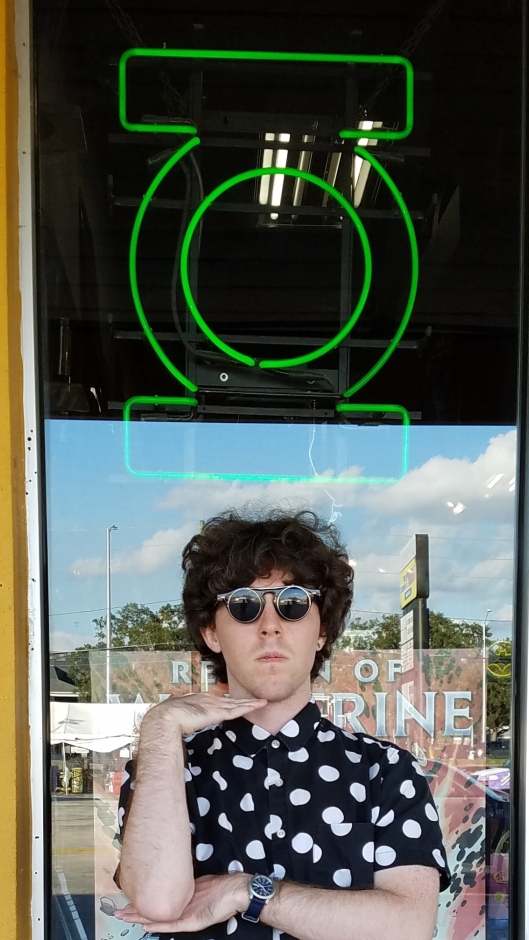