Comics Are Trying to Break Your Heart #19 by Drew Barth

Comics can, and should, be a space in which a multitude of subject matters and issues should be tackled. Comics are a medium in which the blending of text and visuals can make for a story that is easily accessible to a wide range of readers and, as a result, can have a far-reaching influence on the audiences that do inevitably choose to pick a book up. Couple comic’s accessibility to readers as a medium with stories that handle heavier subject matters and creators have a way in which they are able to present works with lasting impact. Graphic novels in particular are incredibly well suited this task. I’ve mentioned my love for graphic novels and the work they do previously with Kelsey Wroten’s Cannonball, and I would like to continue my undying adoration for graphic novels with Guillaume Singelin’s PTSD. 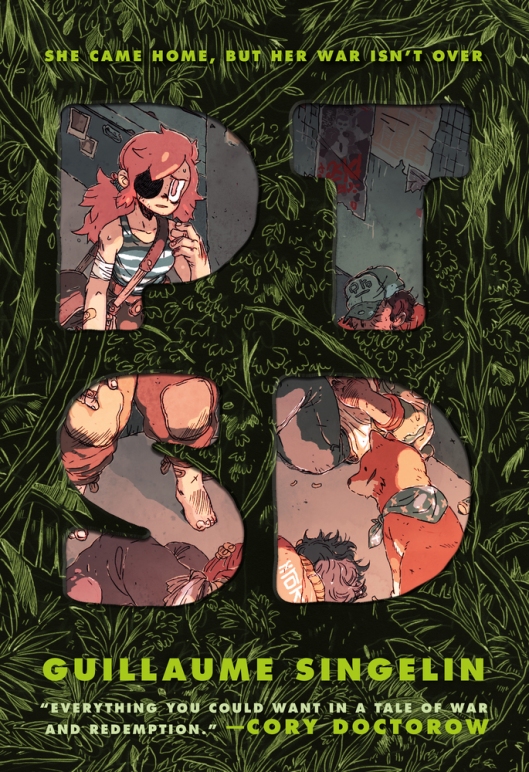 PTSD centers on Jun, a veteran from a recent war in an unnamed country. After returning home, Jun, and many of the other veterans who returned with her, are shunned throughout the unnamed city they have returned to. Almost all are homeless. Almost all are addicted to painkillers or are barely able to function due to starvation. The homeless vets huddle together when they can to trade stories of the past and to keep themselves safe from a city that does not want them there. Is it topical? Considering Singelin has been working on PTSD since at least 2015 when the book was first announced, it feels even more topical than it did four years ago.

There is a distinct feel to a book like PTSD and in what it aims to do. Just from the art alone we can see the more simplified character designs, the expansive color pallet, and the Kowloon Walled City-esque setting the story takes place in. All of the above elements blend together to create both a unique image for the book as well as a distinct tone. Singelin’s art throughout PTSD typifies what Scott McCloud brought up in Understanding Comics in regards to the balance between art and story. A graphic narrative with more simplified art is a story that will likely stick to a reader more than a work with much more realistic art. The reason being that our eyes will focus more on how a character looks more than what the character is saying. Singelin uses this idea to his advantage. Although the characters have an almost cartoon-like design, the trauma they go through is all too real. 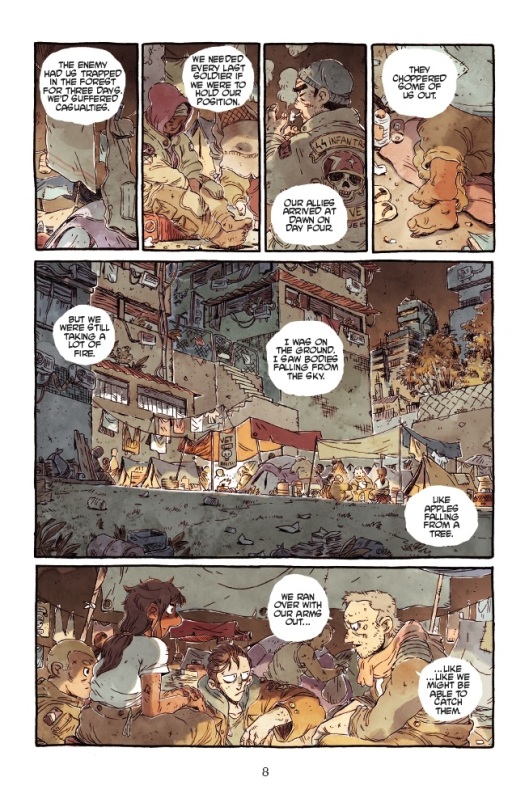 PTSD deals with its titular disorder with a clarity and insight that is only served by the art. Violent moments stand out as gruesome and carry a weight with them that has been missing from many other recent comic works due to their focus on the shock. Singelin knows what is shocking in PTSD and instead of treating violence like something to be fetishized—Jun is shunned from the rest of the homeless vets as a result of violent vigilante actions against local gangs. Where characters would parade around someone taking justice into their own hands, the response in the world of PTSD is very different. And the fact that all of these acts of violence—from the fights in the city streets to flashbacks of active combat—are rendered in Singelin’s particular style lends the weight to these moments that many other books miss. I remember everything that happens to Jun and still feel that pressure in my chest with how hard with scenes of her at her lowest impact.

PTSD is a book about struggle and the violent lengths someone will go through for revenge or survival, but it is also a book laced with hope throughout. And the kind of hope Singelin is showing the reader isn’t the sanguine or sentimental. The hope in PTSD is something that the characters build throughout the story. A restaurant owner, Leona, hands out food to the homeless not as a means of simple charity, but because she is a kind person who wants to see people doing well. And that act of kindness evolves. Soon the same people Leona was serving are partnering with her to provide vegetables they’ve been growing in small gardens. Jun’s vigilante crusade against the city’s gangs ostracize her from the rest of the veteran population, but in her amassing of medical supplies from those same gangs she becomes the single point of medical care for the whole community. And I think that’s one of the greatest strengths of PTSD. Singelin shows us the struggle and the grasping at dirt and air for any kind of relief from the hell we’ve created for ourselves, but he also shows us an alternative. The world of PTSD is in no ways perfect, but it’s a step in the right direction where we can create something lasting for ourselves. And with this book, Singelin has created a story that lasts.

Get excited. Something better is coming.

1 thought on “Comics Are Trying to Break Your Heart #19: Trauma”