Comics Are Trying to Break Your Heart #26 by Drew Barth

Nearly thirty years ago, we saw the birth of Jim Lee’s WildStorm imprint within Image Comics. The name, taken from Lee’s WildC.A.T.S. and Stormwatch, would typify 90s extreme comics: ultra violence, para-military mercenaries, spandex tighter than skin, spikes on everything, and dubious anatomy and musculature. That aesthetic dominated comics. Even Alan Moore contributed to the massive universe of series and characters that Lee spearheaded. By the late 90s, the imprint, along with all series and characters, was purchased by DC Comics and, by 2010, was quietly discontinued.

In 2016, DC announced that Warren Ellis and Jon-Davis Hunt would be reviving the imprint and continuity with a 24-issue series simply known as The Wild Storm.

Ellis and Hunt work throughout the series to build. As a team, they’ve taken characters that had existed in the previous WildStorm imprint and have reinterpreted them for a new universe. There’s the mythology of International Operations, Skywatch, The Authority, the WildC.A.T.S., the aliens and daemons as well as every event in the past that has lead to the creation of the above organizations as well as Angela Spica as the outside observer to every major event. As observers in this world, we’re caught in the middle of a Cold War scenario where both sides really want to blow each other up with as much force and flair as possible.

But Ellis knows that isn’t how a story needs to begin. Not when recreating and building a new universe. If their war is going to have impact—if the casualties are going to have any impact—every moment needs to build toward it. Much like how Angela Spica as a character goes from a rudimentary grasp of the flying exoskeleton hidden in her skin to a complete mastery of her abilities, we see each building block. Warren Ellis is a continual master of this slow building and a series like The Wild Storm only reinforces his mastery.

But more than just the building of the new universe and story, there’s the building of the physical mechanisms of the comic itself. Hunt is brilliant in his use of line and tempo throughout the page as a means of conveying action. In the two previously posted pages, the action on the page takes maybe a minute on the first page and a few moments on the second. Hunt’s nine-panel grids and other grids throughout the series aids the page’s tempo and speed. Using that second page as an example, each of those nineteen panels can constitute a second of time passing, the many panels working like quick cuts in a film or multiple short paragraphs in a written story.

This is comics, though, and that idea can work two ways. All of those panels can be a sign to read quickly, to have the eye move over in a fast way as to get to the explosive panel at the bottom. But at the same time, there is a deliberate slowness to observing each panel as its own moment. A second-to-second beat that can work to slow down time and ratchet up the tension even higher as our eyes unconsciously make their way to the climax of the page. As the series has progressed, Hunt works more to break free from the grid and gives us pages like the following. 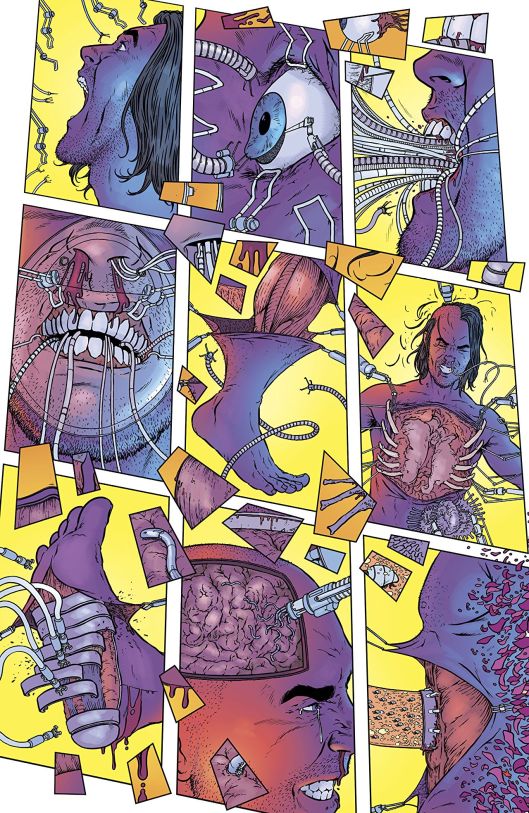 This is the nine panel grid going through the second circle of hell. Much like Jack Hawksmoor inside, the page is being ripped apart. And this is one of the first instances of the series breaking from the grid pattern that had been established in previous issues. In these instances, Ellis and Hunt want the reader to notice and feel uncomfortable with what is being shown. These are the visual cues that make our eyes re-focus and re-examine what is on the page. It helps as well that the above page was after a page turn, contributing more sharply to the impact of the sudden skewing of the grid and insertion of multiple mini-panels.

One of the greatest things about The Wild Storm is that this isn’t the end of the story. It’s the end of the character arc for Angelia Spica as she’s gone from barely being involved in the world to being an active partner in saving it. But there are other characters introduced, more concepts like the other leftover experiments into superpowers by both International Operations and Skywatch, story threads hanging in regards to what happens to both of those organizations after massive upheavals in their structure. Ellis and Hunt have built a complete breathing universe for more creators to come through and add their ideas. Through both story and page structure, they have built a tone and a tempo for the rest of the universe to follow as the gaps they have left get filled in. Ellis himself has another series, WildC.A.T.S., slated for release later this year and Bryan Edward Hill and N. Steven Harris have recently completed The Wild Storm: Michael Cray limited series that expands upon that character’s story as well.

If there was ever an example of a well-curated universe spinning out of one of the best superhero series of the century, The Wild Storm is it.

Get excited. The storm isn’t over.