Neil Adams, one of the comics’ greatest artists, once said, “There are no bad characters, only bad writers.” After reading comics nearly my whole life, I not only have to agree with Adams, but I don’t even understand how someone could argue otherwise. When I was a kid, I hated the Punisher, and then Garth Ennis came along. I hated Green Lantern until I read Geoff Johns run. Some, like Captain America and The Fantastic Four, I wouldn’t say I hated, just indifferent. Growing up, I really only enjoyed X-Men comics. Nothing else really grabbed me. Even today, there are comic characters that I don’t read on a regular basis (Batman, Iron Man, Captain America, etc.), but there are certain runs on those titles that I have read and loved. One thing that’s really cool about company-owned comics (yes, there are some positives about companies owning work and not the creators) is that the characters never really go away forever—they just go into hibernation until the right creative team comes along. 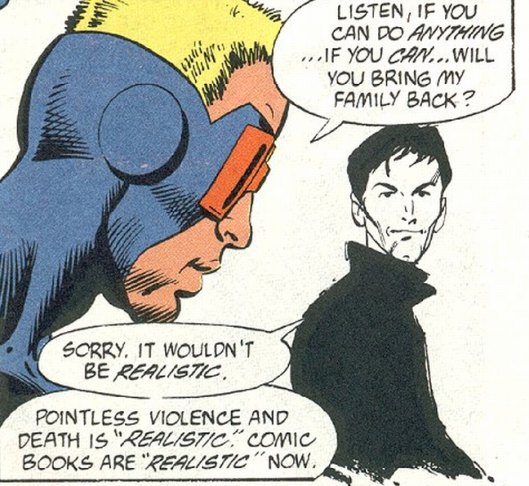 Animal Man made his debut in 1965 in Strange Adventures #180 written by Dave Wood with art by Carmine Infantino and George Roussos. At first his appearances were semi-regular, but after a couple of years, he was used sparsely. It wasn’t until the late ‘80s when Grant Morrison revived the character for a 26-issue run with art by Chas Truog and Doug Hazlewood (along with fantastic covers by Brian Bolland) that the character gained some attention. 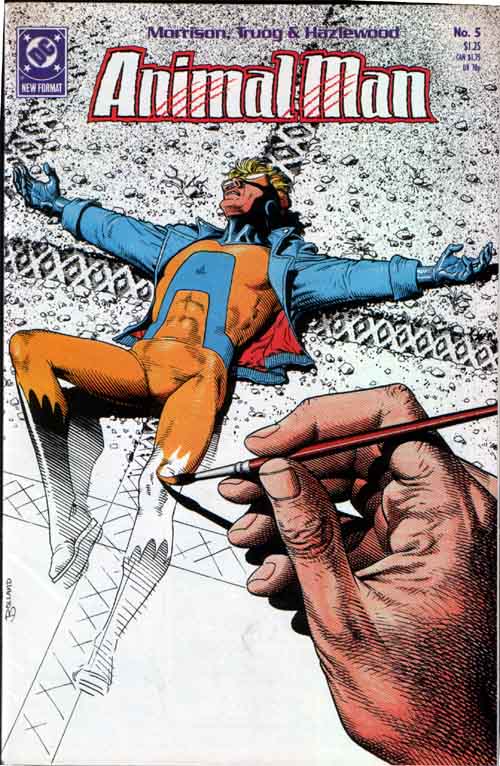 Animal Man’s alter-ego is Buddy Baker, and under Morrison’s tenure, Baker became the everyman of the DC Universe. Baker lived in a middle-class suburban neighborhood with his wife, Ellen, and their two young children. While he interacted with Mirror Master, Superman, B’wana Beast, and many other characters who populate the DC canon, much of the focus was on his family and how his superhero status affected them. Morrison, also, wisely played up Animal Man’s second tier status in the superhero world. For those of you unfamiliar with the character, he has the power to absorb the abilities of animals within his vicinity.

Morrison, a supporter of animal rights, used the comic to champion his beliefs. His run began with Animal Man tackling a break-in at S.T.A.R. labs, where scientists were using primates to find a cure for AIDS. I don’t think it’s too difficult to guess what the underlying themes of this story arc were. Even though the initial story arc was pretty straightforward compared to many of Morrison’s other work (originally, it was only supposed to be a mini-series), it still had great moments—for example, Animal Man gets his arm cut off at the end of one issue and is left to bleed out in an alley. His body instinctively searches the area for animals and finds an earthworm under the soil and uses the earthworm’s ability to regenerate his lost limb. It was exciting and really showed the reader the power that lay at Baker’s fingertips.

When Morrison’s run was extended past the initial plan of the mini-series, the comic went beyond  a look at Man’s violence and superiority over the animal kingdom and commented on our need, or obsession, with violence as a whole. The later half of his run is why out of all of Morrison’s great work in comics, Animal Man is his comic that I keep returning to. At one point, in the strangest issue of Morrison’s run, Baker meets an anthropomorphic coyote (similar to Wiley E. Coyote) who as a punishment for rebelling against his God has been forced to live out life in the DC Universe and getting killed repeatedly. I won’t spoil the middle of Morrison’s run, which heavily involves the Pre-Crisis DC Universe. 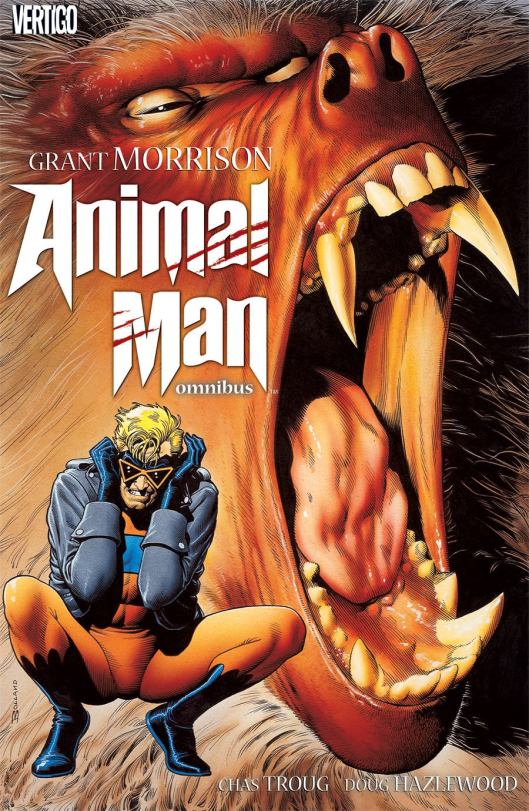 In the last part of Morrison’s run, Buddy Baker returned home to find his family murdered (not gone, but lying on the kitchen floor drenched in blood having been shot). Animal Man, then, went on a mission to find the man responsible for his family’s death. He eventually found his way to Limbo, a land of forgotten characters, where he found a monkey using a typewriter to type the script to Animal Man #25. The monkey was dying, so Animal Man decided to help him by taking him to the City of Formation. He searched for an unspecified amount of time. Time does not exist in Limbo. He found his way to a house, and when he opened the door, Grant Morrison greeted him.

Usually, I dislike the breaking of the fourth wall, but it works here because Morrison doesn’t take it too seriously. When Animal Man screams at Morrison that the writer killed his family, Morrison says so what and that his cat died. He tells Baker that he had planned this meeting years earlier and hoped he’d have something profound to say but had nothing, so he created three villains to beat the crap out of Animal Man as Morrison thanked everyone who had helped make the comic series a success. By playing up the ridiculousness of the concept, Morrison is able to comment on how we writers use violence in fiction as a way to deal with the real world, while not sounding pretentious. In the end, Morrison grants Animal Man his wish to have his family restored as he can’t keep justifying that they need to die because of Morrison’s sense of realism.