In Boozo Veritas # 51 by Teege Braune

The Ghost of an Artifact

I know now that there is no one thing that is true – it is all true.

I have a clear and distinct image of the photograph in my memory. A boy a few years older than myself who I am told is – but do not recognize as – my father sits on the lap of an elderly gentleman. I think of the man, with his white beard and sad, kindly smile, as a grandfather, despite the fact that he in no way resembles either of my actual grandfathers. He beams down at my father who in turns looks, straight faced and serious, at the camera. “Idaho – 1961” is scribbled in ink on the back of the photograph. The one time I remember seeing this old photograph I was informed that the man was a very famous writer who killed himself shortly after my father met him. I don’t know why anyone felt the need to convey that final detail to me as a child, but it stands out as the saddest thing I had heard by that point in my life.

The writer in the photograph is Ernest Hemingway who would have been 115 years old today on July 21, 2014. My father describes their chance encounter as such:

“My family was traveling through Idaho in Spring of ’61 when I was 11, and I was admitted to Sun Valley Hospital with severe joint pain. The doctor’s thought it might be some kind of iron overload. EH was in that hospital at the time, and he liked to tell me stories because I was in such pain. He wanted me to sit on his lap for the story telling – which was weird because I was 11 – but I did it and some nurse took a picture at some point. I was ok, just some odd bug bite or something, but I heard he killed himself a few months later. I remember that scene like it was yesterday.”

My dad does not have a lot more details to offer. As his parents have both passed away and his siblings are all younger, there is no one available to further elucidate the circumstances of this meeting. My dad remembers that Hemingway told him stories about soldiers, cowboys, and Indians, the kind of stuff he perhaps assumed all eleven year old boys enjoyed, though my dad was more interested in spacemen. (Maybe he would have been more entertained had he found himself in the same hospital as Isaac Asimov or Ray Bradbury.) He remembers Hemingway as a kind, elderly man who seemed “very old and sort of out of it,” though Hemingway was only sixty-one at the time. I asked my dad if Hemingway’s suicide affected him emotionally in any fundamental way, but he does not remember. “It was the first time I probably even thought about suicide. It wasn’t a subject people liked to discuss in the early ‘60s. I doubt I had much of a concept of what that meant,” he said. I asked my dad, who I have always known as a prodigious reader, if his youthful encounter with Hemingway allowed him to feel a connection to his work later in life, but my dad says no. “I’ve got nothing. I’m not very familiar with him. I read The Sun Also Rises in high school, but I don’t remember being able to associate that book with the man I met many years before,” he told me. If my dad made an impression on Hemingway there is no record of it. It is entirely possible that Hemingway, whose numerous physical and mental problems had already destroyed him creatively, never wrote another word between his short time with my father and his untimely death.

I became a big fan of Hemingway’s work in high school when I read The Old Man and the Sea and shortly after The Sun Also Rises, the bookends of Hemingway’s career in reverse order. My own writing, in which I attempted to copy Hemingway’s short, abbreviated style, became even worse than it was when I was copying Jack Kerouac’s sprawling sentences.

“Your dad met Ernest Hemingway once,” my mom told me as my interest began to turn into an obsession.

“Oh, yeah. There was a picture of them together floating around somewhere,” she said casually.

The meaning behind the photograph that I had seen as a child and had not thought about since suddenly became painfully obvious to me. I asked my mom if she knew where it was, but she did not. I asked my dad who said that his parents probably still had it. The next time I was at their house I went through several boxes of photographs but none of them featured Ernest Hemingway. My grandparents remembered the photograph, but could offer no clues as to its whereabouts. “He seemed like such a strange old man, but he loved your dad” was their only input on the entire meeting. Finding the missing photograph became a mission, but none of the family members who I called or emailed had any information. Everyone agreed to search through their old family photos or allow me to look through them myself, but nothing ever turned up. In the last few years I have begun to wonder if the picture is an example of a sort of mass family hysteria or hallucination. Perhaps we are remembering a story about another family who showed my grandparents a picture of their own son sitting on Hemingway’s lap, and at some point we internalized it, made the story about us because that seemed more interesting. 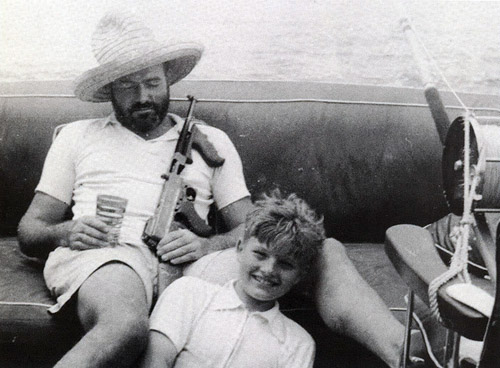 The photograph included here is not the one in question; it is a picture of Hemingway and his own son. Maybe one day I’ll be rummaging through old family albums, turn a page, and there it will be, shining forth from behind its clear envelope, the lost and coveted photograph of my dad sitting on the lap of an old and very depressed Ernest Hemingway, one of the last photographs ever taken of one of the 20th century’s most important writers, a smidgen of history, a family legend verified, one more ghost laid to rest. 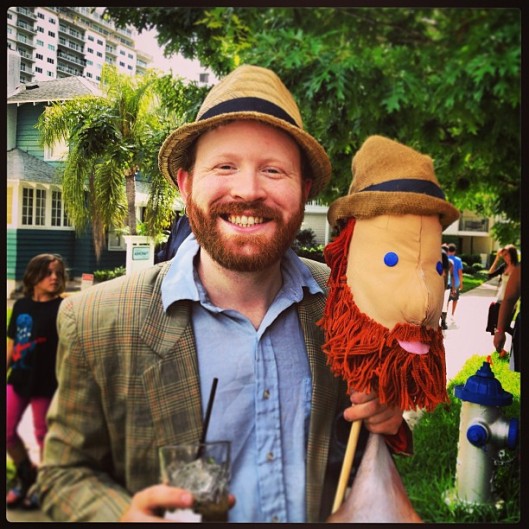 In Boozo Veritas #1 by Teege Braune

I had intentions of becoming a writer long before it ever occurred to me to become a drunk. Long before alcohol held the appeal of the forbidden, sips of my parents’ beer, wine, and champagne merely tasted bitter or sickeningly cloying. Written words, were my only forays into the intoxicating and dangerous. Fantasy fiction was an escape from a reality that found me simultaneously outgoing yet socially awkward and unpopular. I created characters who overcame monsters in make-believe worlds to compensate for ritualistic embarrassment at playground sports. Moreover, I found that words spilling out of my big, overly-talkative mouth were often the source of ridicule whereas words I wrote on paper seemed to inspire praise.

As I matured and graduated from young-adult fantasy to the twentieth-century canon, it was the escape of literature that introduced me to the escape of alcohol. Long before I’d consumed an entire beer, I idolized drunken men of letters like Jack Kerouac and Ernest Hemingway. If travels to exotic locations like New York, San Francisco, Paris, and Pamplona were the initial appeal of On the Road and The Sun Also Rises, alcohol seemed like the best way to enjoy such remote places. The logical conclusion to which I came was simple: if I couldn’t visit the lands I longed to see, I could at least drink in my own boring, midwestern town. If nothing else, classic male American writers teach us one thing, that the train to adventure, sex, and literary praise is fueled by booze.

Though my parents had never demonized alcohol, they rarely indulged in more than a glass of wine or beer with dinner and never kept much around the house. The majority of my social interactions revolved around church youth groups. Thus, I had made up my resolve to get drunk quite awhile before I finally found an opportunity to actually do so. Unlike most teenagers, I had graduated high school before I finally imbibed, but the summer before my freshman year of college I had my jaunt.

One evening I accepted the invitation to stay the night with a friend whose older acquaintance had bought us a veritable cornucopia of beverages that were never meant to be consumed in the same sitting. We enjoyed wine coolers while watching Fear and Loathing in Las Vegas, forced down beer, for which I had yet to develop a taste, and then, already thoroughly tipsy, retired to the back porch where we smoked cigars as we passed around a bottle of spiced rum that we chased with Mountain Dew. Slumped, relaxed, and feeling, at least for a few more minutes, really good, I imagined myself in a Parisian cafe with Jake Barnes and Lady Brett Ashley or some roadside bar with Dean Moriarty and Sal Paradise. At last I’m becoming a real writer, I thought. 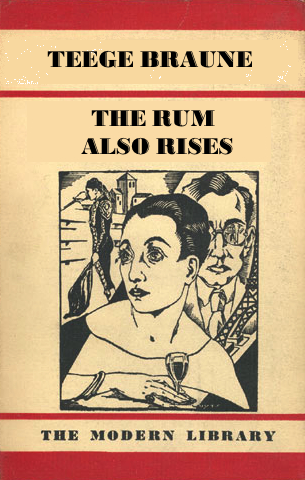 As the back porch, my hometown, and entire life to that point vortexed around me, I felt myself being transported like Dorothy in her twister from a black and white, straight-laced, church-going youth into a colorful and romantic boozy adulthood. I promised myself that I would document this momentous occasion lest I forget any detail in the sober light of morning, but as my brain sloshed inside my skull, a few illegible lines about feeling dizzy and horny were all I managed to scratch out before puking into the backyard. I shrugged off the advances of a predatory and unappealing woman ten years my senior who seemed intent on stealing my virginity despite the vomit dribbling off my chin and crawled off to sleep in a hammock that rocked like a schooner adrift in a rough ocean. I fitfully slept and woke continually to puke over the side of my vessel till morning when, still drunk, I drove home and with a bottle of aspirin, greasy breakfast, and several tall glasses of water nursed my first hangover.

So, you may be asking, did your young and naive narrator learn the folly of alcoholic excess? Did he realize that literary inspiration does not arise, without fail, from the murky depths of a besotted imagination? Did I in my dry-mouthed and head-pounding misery swear off the sauce forever. No, I did not! Later that very night as I, only seventeen and already fully recovered, spun my tale of over-indulgence at youth group to peers who had yet to taste the secret pleasures and sufferings of alcoholic depravity, I exaggerated my induction into adult fun with romantic flourish. Even then I was already chronicling my life of literary decadence and planning my next binge. 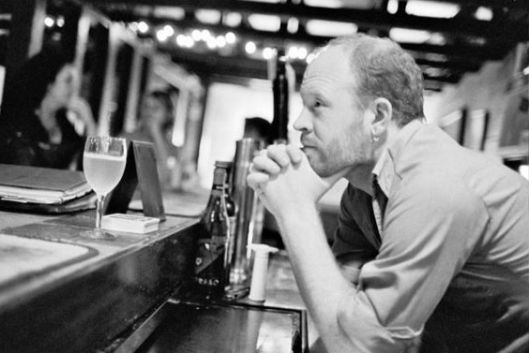