Comics Are Trying to Break Your Heart #107 by Drew Barth

Many years ago now, I went to school to get a degree in journalism. While I changed my career path, I always have a soft spot for good journalists, from movies like Good Night, and Good Luck to characters like Kent Brockman, but especially Lois Lane. With many of her modern iterations shirking the role of Superman’s damsel to become one of the most well respected characters in the DC Universe, Lois Lane’s series released last year by Greg Rucka and Mike Perkins is a wonderful gift.

Like it says on the cover of issue one, this Lois Lane series deals with an earth-shattering secret that only Lane herself can reveal—that all multiverses seem to have merged into one and that many characters have been mashed together as a result. With Renee Montoya as The Question acting as bodyguard and investigative partner, Lane prods the very nature of the multiverse while simultaneously getting kicked out of The White House and making enemies of powerful financial interests worldwide. That story felt relevant when I reviewed the first issue in mid-2019. Even if the times have changed, that issue still hasn’t lost any of its impact. But what does a journalistic-centric series like this mean when there’s been such a shift in the world, both internally and externally?

Due to the talent of Rucka and Perkins, Lois Lane still reads like a series that debuted last week. Bringing that light to some of the darker corners of the world made Lois Lane such an interesting character for so long—she endures even without the bulletproof boy scout by her side. She even tells him here that he doesn’t need to be a part of her investigations. This can be handled by herself and The Question.

This is the DC Universe before the infinite multiverse was canon again. Also, this is a comic when we all had Trump-shaped ulcers, but removed from all of that context, there is that core mystery driving the story forward. There is the world that is a giant puzzle to be solved and there’s this idea that investigating and just doing some goddamn good journalism can change things for the better. But then this is comics—it’s a medium known for being fantastical.

Get excited. Get writing.

Comics Are Trying to Break Your Heart #27 by Drew Barth

A new reader looks at issue #1007 of Detective Comics and would likely feel intimidated. There’s much to be said for a short series. It’s why I was recently drawn to Coda or Cemetery Beach, which tell fantastic stories that actually, satisfyingly end. DC has been working on some of these smaller-scale stories like Tom King and Mitch Gerads’ Mister Miracle, Cecil Castellucci and Adriana Melo’s Female Furies, and now Greg Rucka and Mike Perkins’ Lois Lane. 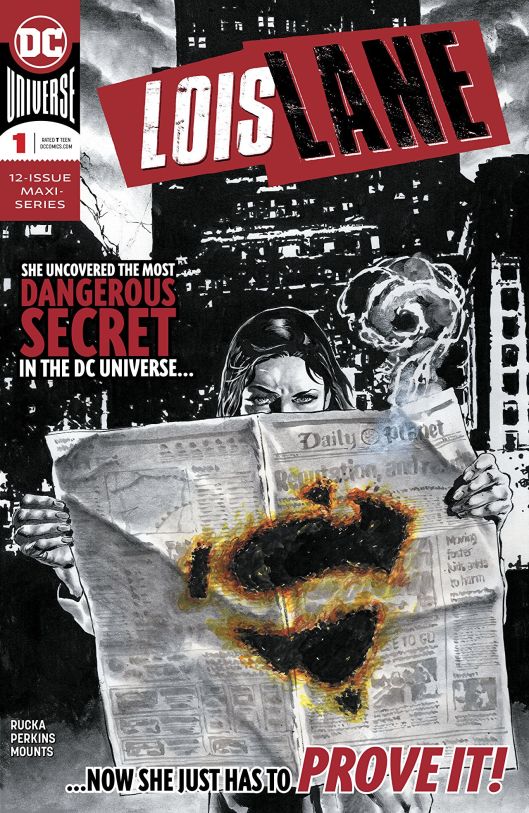 The name Greg Rucka on its own should be exciting, as he was one of the architects of DC’s modern era. From being one of the writers on 52 to expanding the Bat-family mythology with his runs on Batman, Batwoman, and Gotham Central, his name has earned its reverence. And with Lois Lane, Rucka—with Perkins’ shadow and smoke soaked panels—is working within one of his strongest genres: crime.

Of course Pulitzer journalist Lois Lane is going to write about crime and corruption in the highest places—she’s won a Pulitzer prize and intends to expose every horrendous thing the current presidential administration has done. In only the first issue, Rucka has already given us the catharsis of Lane yelling at the White House press secretary about the funding for child internment camps with hard numbers and throwing out a name like Lexcorp, which is somehow less evil now. (Let’s be honest: we’ve all wanted to scream at the White House for one reason or another.)

But that catharsis is only one aspect of this story. From the beginning, we actually have Lois away from Metropolis, holed up in a hotel in Chicago, and working on a story that will soon devastate the current White House. We also have a Russian journalist murdered over secrets we know nothing about just yet. And it is through that little plot-hook that Rucka and Perkins catch us—those unknown secrets are mentioned sparingly..

Rucka excels at using contemporary issues to build the reality of the world he’s writing in. The corruption and child internment camps that Lois Lane mentions is a harsh reality. Characters like Lane and Renee Montoya in this first issue deal with that seedier reality as they’re not superhuman. Superman himself is right there, but he’s Clark Kent throughout this issue. Going back to his work on Gotham Central, Rucka always finds ways to make us believe in the peril and mortality of these comic book characters, typically with the contrasting of their moments of triumph with that abrupt shift into something dangerous. Although the danger hasn’t yet fallen into Lois Lane just yet, you can hear the sword swinging above, ready to drop.

Lois Lane is the perfect canvas for the reintroduction and development of Renee Montoya (AKA, The Question), an intriguing character from the Gotham world that Rucka helped to define more than a decade ago. As this is the first we’ve really seen of Montoya since DC’s rebooting of their universe a few years ago, it’s going to be interesting to see how Rucka will develop her character in this new continuity. Personally, I’m excited to see The Question make her comeback. From her two scenes in this story—a Deep Throat-esque dark parking garage conversation and the rescuing of secret files form a murdered journalist—The Question is in her original element of investigation and punching.

Stories like these are how new fans are made—small stakes time and money investment, familiar characters and creators, and strong story-telling. These stories are also how old fans can get excited about the universe again. A good short series like what Lois Lane is shaping up to be is a revitalization for the whole line: low-entry curiosity for new readers and a shorter story for older readers fatigued from longer-running series.

Get excited. Answer The Question.