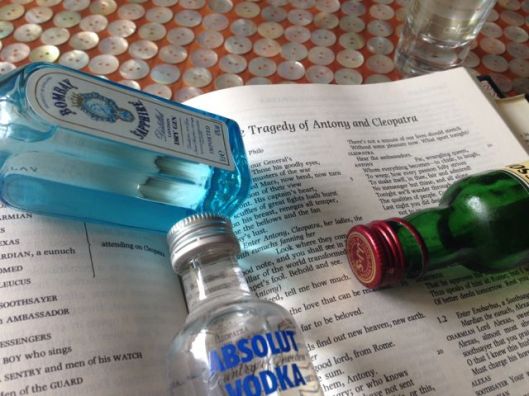 One reason I wouldn’t be a good playwriting teacher is that I wouldn’t know how to teach inconsistency. It’s one of those things I think you either get or you don’t, one of those things that suggest certain elements of writing can’t be taught. Mostly I mean inconsistency of character, and the not-quite-playwright usually produces one of two effects when drawing a character. Either the character is diagrammatically laid out, sometimes with painstaking psychological nuance, so that everything the character does is motivated with crystal clarity, or else the character makes no sense whatsoever, shifting and chopping according to the whims of the playwright or the needs of the plot. Neither resembles an actual person.

If I wanted to try to teach characterization—if I wanted to give a student some idea of how to portray a character whirling, like most of us, around some wavering core—I’d say, Read Shakespeare. Read Antony and Cleopatra.

In this play Shakespeare seems to set up inconsistency as the signature of a noble soul. His two leads, equals in stature and in confounding behavior, are set against the chilling single-mindedness of Caesar. They tack back and forth (sometimes literally) on the impulses of the moment. This, of course, is a problem even if you’re not trying to win an empire. How can you construct a recognizable self from a welter of warring impulses? Antony seems to sense this in a speech in which he compares himself to a drifting cloud, “A vapor, sometime like a bear or lion,/A tower’d citadel, a pendant rock,/A forked mountain” until “the rack dislimns, and makes it indistinct.”

Two things save Antony and Cleopatra: the largeness of their passions and their rhetoric. And here’s where I’d feel compelled to warn my young playwright. You have to be careful with Shakespeare, I’d say, because he can leave you with a fascination with characters who shape themselves through rhetoric. And that dynamic structure—the fragmentary, contradictory character willing itself into shape through continued acts of speech—can puzzle those used to cleaner forms of characterization. (Though this itself is a puzzle since many great playwrights—Chekhov, Williams, O’Neill—have done it.)

Cleopatra’s last moments are flight after flight of rhetoric, as if daring herself to new heights. It’s hard to tell who’s getting higher on her fumes, she or Shakespeare. It begins in Act IV: “O, wither’d is the garland of the world,” and “It were for me/To throw my sceptre at the injurious gods,/To tell them that this world did equal theirs/Till they had stol’n our jewel.” In her final scene, she pulls out all the stops: “Rather on Nilus’ mud/Lay me stark nak’d, and let the water-flies/Blow me into abhorring.” She even takes some meta-jibes at the actor playing her, who as “some squeaking Cleopatra [will] boy my greatness/I’th’ posture of a whore.” By the time she gets to “I have immortal longings in me,” we’re entirely swept away by this magnificent act of self-recreation on the verge of self-destruction.

But maybe she’s on to her own game. The more fatal master of rhetoric is Caesar, for whom rhetoric is not about self-creation but political force. When he smoothly, persuasively lies to her about how she’ll be treated as a captive, she replies, “He words me, girls, he words me.”

How strange in this last act of Antony and Cleopatra to be reminded both of the falseness of rhetoric and its thrilling power. It creates worlds, it creates people, and when all else is lost, it builds a pyre on which to throw yourself.