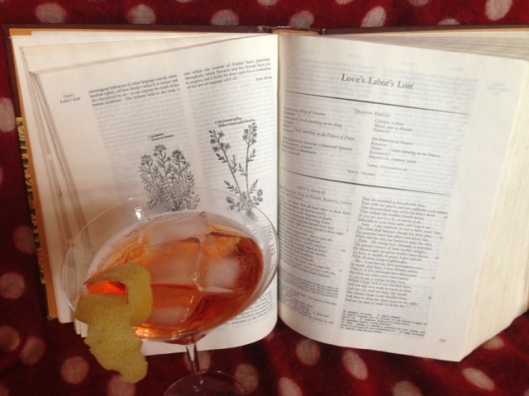 I’ve now hacked my way through Love’s Labor’s Lost. This is more than I accomplished when I first tried to read the play a few years back. Then I don’t think I got much past Act II.

The Riverside introduction calls Love’s Labor “the most relentlessly Elizabethan of all Shakespeare’s plays,” and that might be some comfort. Maybe it’s an Elizabethan thing; you had to be there. Perhaps it’s loved even today by Elizabethan scholars. When they’re in their cups, they roar with laughter reading each other the punning dialogue in Act IV, scene ii, which depends on knowing the Elizabethan terms for a deer in each year of its growth. (A deer in its second year was called a “pricket,” if that gives you some idea.)

The title page of the First Quarto says the play “was presented before her Highnes this last Christmas,” which may explain why the play feels less a play than a masque, a courtly entertainment. This effect is intensified by its formal intricacy. Most of it is rhymed, and the rhyme schemes vary, as do the meters and line lengths. And there’s all that sophisticated punning. For all I know, these puns coruscated with Stoppardian wit when they were written, but now all the Riverside notes in the world can’t make them funny. And their very elaborateness, their insistence that we stop and attend to their layered implications, adds to the static quality of the play. You get the feeling that Shakespeare is trying too hard.

When a brilliant mind tries hard, the effects are impressive. But are they Shakespeare? What relation do they bear to what makes Shakespeare uniquely Shakespeare? In an intriguing way, Love’s Labor is an instance of form following content. The play is about the sterility of an academic approach to life, to love, and even to art. There’s always been a sense that Shakespeare, a country lad without a university education, was condescended to by his more educated fellow playwrights. Here he’s showing them he can beat them at their own game and (perhaps unintentionally) demonstrating the limits of the game.

In this reading, Shakespeare is Berowne, who seems to want out not just of the King’s contract but of the play itself. His unruly speeches keep threatening to derail the play’s intricately orchestrated dance. Rhyme disappears when, in Act IV, scene iii, he urges the others to break their vow:

But love, first learned in a lady’s eyes,

Lives not alone immured in the brain,

But with the motion of all elements,

Courses as swift as thought in every power[.]

In the end, after all the puns have been punned and the rhymes rhymed, the play takes a turn for the mysterious and the beautiful. The Princess’s father dies, and we enter the world of human cost. The women set conditions for the men that are, in genre, chivalric tests, but in language the language of the difficult world, of “frosts and fasts, hard lodging and thin weeds.” Even Berowne is reminded that his “shallow laughing” will not help him when he “visit[s] the speechless sick.”

The song that ends the play continues this opposition of form to content. In form a pastoral, it snaps with a country lad’s sense of the actual: the “milk comes frozen home in pail,” “coughing drowns the parson’s saw,” and “Marian’s nose looks red and raw.”

It’s the great paradox of Shakespeare. Possessing an ear preternaturally attuned to the form and play of language, he was yet our greatest poet of the real.