Fight sequences can be difficult in comics, in really any medium. What do you show? How long should it last? How should it be paced? How should the characters fight? How much detail in the injuries is shown? And there are many more questions to consider. Unfortunately, superhero comics must show a fight scene eventually. In The Boys, readers have been shown a lot of depravity so far, but not much in terms of fights. But issue five ended with Teenage Kix approaching the Boys on the street, so issue six, and the end of the first volume, is the fight that’s been building these last couple of issues. 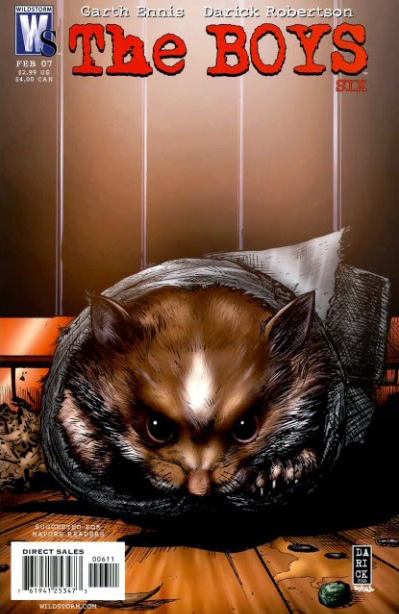 Now, many people want superheroes to get in some grand, citywide fight. Think the final act of Man of Steel or The Avengers. While that makes sense for some superheroes, it doesn’t make sense for others. Daredevil can run around and do flips and be all eloquent with his ninja moves because he was trained by Stick, a sensei. But, in The Boys, as Butcher stated in an earlier issue, the superheroes aren’t trained. Most of the superheroes here were just regular Joes who happened to gain superpowers. So, here, readers basically get a street fight between the Boys and Teenage Kix.

Big Game, the leader of Teenage Kix, begins with a big speech to his team about how to handle their enemy, but the Boys don’t need anything. They are skilled and trained at what they do and that happens to be kicking the ass of superheroes. Butcher head butts Big Game in the middle of his speech and breaks his nose. That’s the first page of the comic. Big Game’s speech, and Butcher breaking his nose. It’s sudden, brutal, and sets up how the fight will play out. 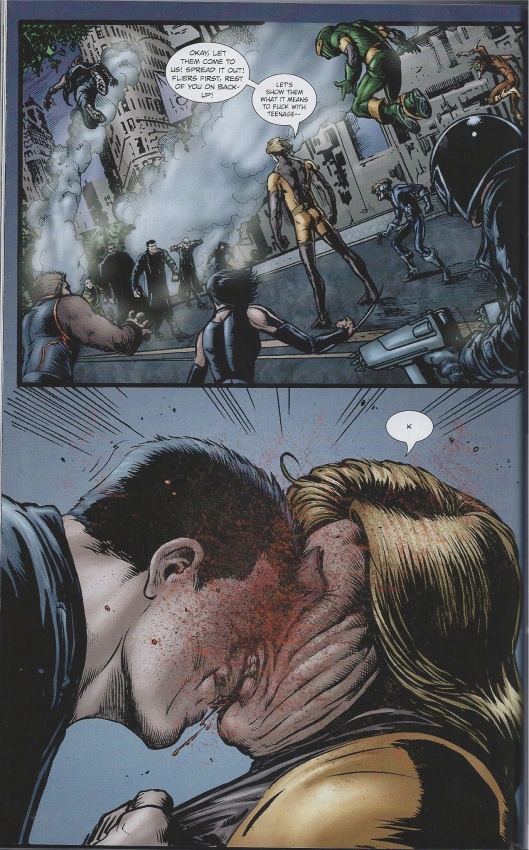 The second page features four panels, one for each of the other members of the Boys (Mother’s Milk, the Frenchman, the Female, and Hughie). The first three kick ass, with only Hughie on the run. He’s the newbie so it makes sense he has no idea what he’s doing. Hughie ends up coming face to face with Blarney Cock, who tries to cut out Hughie’s eyes. Hughie, who had been given a formula by Butcher to make him stronger so that he could take on superheroes, panics and just punches Blarney Cock in the stomach. His fist goes right through Blarney Cock, who stumbles a bit and falls over dead.

Butcher’s reaction is priceless. “Fucksake, Hughie, you’re not supposed to kill them…”

What does Hughie know? This is his first fight with a superhero. He didn’t know he was that strong. Blarney Cock’s death ends the fight. Well, except for Shout Out burning Butcher, who then grabs Shout Out and rips his thumbs off. In twenty-two pages of comic, the fight scene lasts six, with a couple of more pages on the aftermath. Some readers might be disappointed. I don’t read a comic for a bunch of fight scenes, but some readers of superhero comics do. But the short fight works well here. It makes sense given Teenage Kix are just some young superheroes who think they know everything, and that the Boys are a CIA special forces team.

Just because someone has superpowers doesn’t mean they can take a beating. If they are super strong and their enemy is super strong, they can’t just trade blows throughout a city without feeling it. How many strong boxers have been knocked out in the first round? For me, a superhero fight should display the full effect of the fighters’ powers. Hughie removing Blarney Cock’s intestine or Butcher ripping off Shout Out’s thumbs does just that. Fights are better shorter with moments a reader will remember than stretching it out with a lot of jumping building from building or flying to new locations. While it’s important to show the Boys’ capabilities, as well as the superheroes’ capabilities, the focus still needs to be on the characters.

Because the fight is short, the comic has room for another conversation between Butcher and Hughie for the climax of the issue. One the mysteries of the comic has been why Butcher has it in for the superheroes. Even Mother’s Milk wonders if some superheroes mean well, but Butcher just says, “Fuck ‘em.” Butcher admits to Hughie that a superhero raped and impregnated his wife. She was physically unable to hold the baby, and one night, the baby ripped through her stomach, killing her. Butcher beat the baby to death with a lampstand. He has a scar on his forearm from the baby’s heat vision. It’s a graphic and disturbing story, and it helps readers understand Butcher and why he does what he does. And that closes out the first volume. We see what Butcher and the other Boys can do and why they do it.