The Curator of Schlock #61 by Jeff Shuster

(The band was named after the movie, smart guy.) 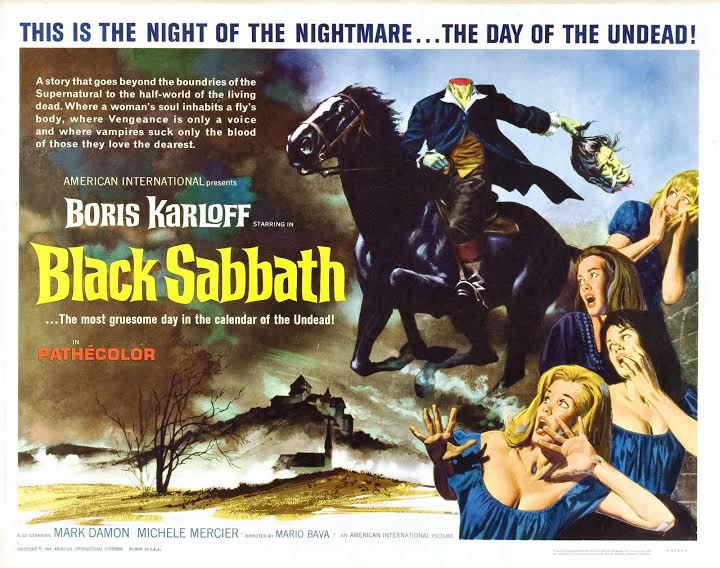 I’ll admit it. I had a bit of an obsession with Boris Karloff growing up. Not so much for his portrayal of Frankenstein, but for the Universal Monsters classic The Mummy. Imhotep. That was his name if I recall. He didn’t spend too much time in those bandages, but he did wear a fez. Anyway, I wish my eight year-old self had known about Black Sabbath, the 1963 horror anthology from director Mario Bava. Karloff serves as our ghoulish host of this screen adaptation of Chekov and Tolstoy horror stories.

Our first story is called “The Drop of Water,” a tale about bad things happening to a bad people. Let me explain. This master medium lady dies in the middle of a séance or she was in a trance or something to that effect. Anyway, her nurse, Helen Chester (Jacqueline Pierreux), shows up to the scene to prep her body for the inevitable funeral.  The medium’s corpse is quite hideous, not the sort of thing you’d want to be left alone in a room with. Oh, and the medium said that anyone who stole her property after she died would have a terrible curse placed upon them. So naturally the nurse decides to steal the gold ring off the corpse’s finger.

I don’t get people sometimes. Don’t steal the corpse’s golden arm or pocket the silver dollars that was keeping its eyelids shut or carve out the corpse’s liver so you have something to feed your ill-tempered husband for supper when he gets home from work. These stories never end well. The corpse will come to house late at night to do you some damage. And they tend to mess with you first before dealing the final blow. Don’t be greedy. Let the dead take it with them.

The next story is called “The Telephone,” and it’s about a telephone that tends to ring from time to time.

Some guy named Frank keeps calling some woman named Rosy (Michele Mercier), commenting on what a “beautiful body” she has. 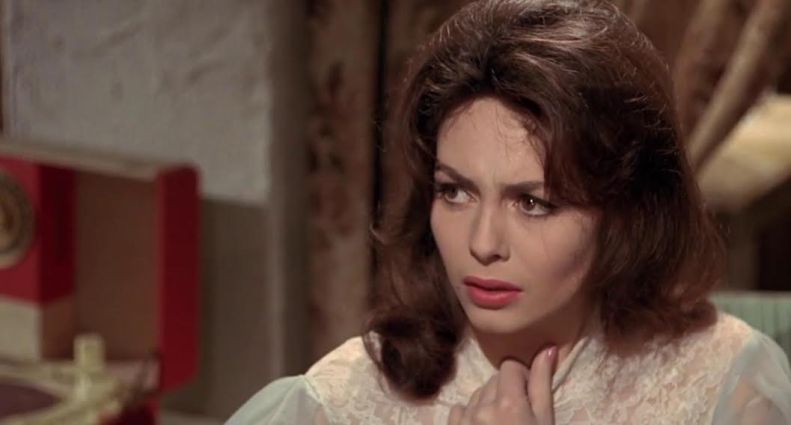 Now I want to make it clear that we here at The Museum of Schlock do not condone obscene phone calls. Prince-Albert-in-a-can calls are okay. Anyway, Karloff promised a ghost in this story, but we get a deranged maniac instead. Maybe he was possessed by the ghost of Frank or something. I don’t know. We’re moving on now.

The last story is called “The Wurdalak,” and it’s about vampires, Russian vampires called wurdalaks. The main difference with these vampires is they tend to go for the blood of family members.

So when the patriarch of the clan by the name of Gorca returns from the wilderness deathly pale and complaining about insatiable hunger, his family naturally takes him in despite the fact that they know the countryside is swarming with vampires. It doesn’t help matters that Gorca is played by Boris Karloff! Anyway when Gorca is offered succulent roast lamb only to push it away in disgust, you shouldn’t take that as a sign that he’s suddenly gone vegan. When he orders the first son to shoot his favorite dog, this isn’t some test of loyalty where he’ll intervene at the last minute to stay the canine’s execution. When he starts drinking the blood of his family members, you shouldn’t take that as a sign that he’s a vampire…oh wait. Nix that last one. Boris Karloff playing a vampire. The circle is now complete.

Jeffrey Shuster (episode 47, episode 102) is an MFA candidate and instructor at the University of Central Florida