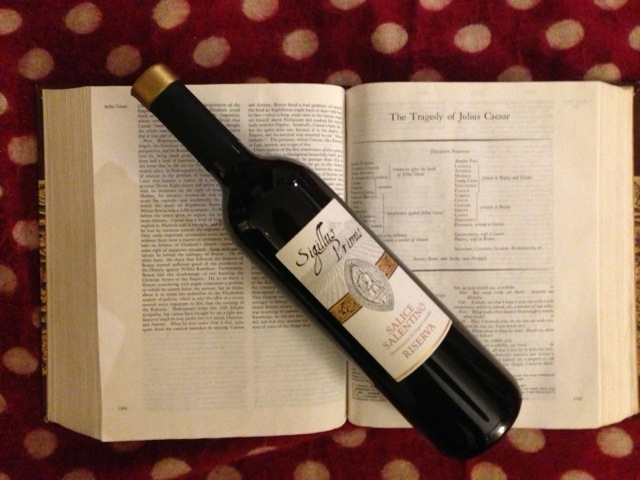 It’s a little spooky to read Julius Caesar right after re-reading René Girard’s Violence and the Sacred. The language of sacrifice surrounds Caesar’s murder. “Let’s be sacrificers, but not butchers,” says Brutus. “Let’s carve him as a dish fit for the gods.” In flattering Caesar, Decius spells out a sacrificial intent: “from you great Rome/Shall suck reviving blood.” And when they’ve killed him, the assassins “bathe [their] hands in Caesar’s blood/Up to the elbows,” as if to imbrue themselves with the sacred.

Girard is a fan of Shakespeare, who, he says, “bridges the gap between the most primitive concepts of kingship and the most modern.” Perhaps the conspirators fall into that gap, attempting to address a political crisis while getting tangled in a sacrificial one. Caesar, who has reluctantly refused a crown, becomes in death a sacred king. Antony suggests the plebeians “dip their napkins in his sacred blood.” 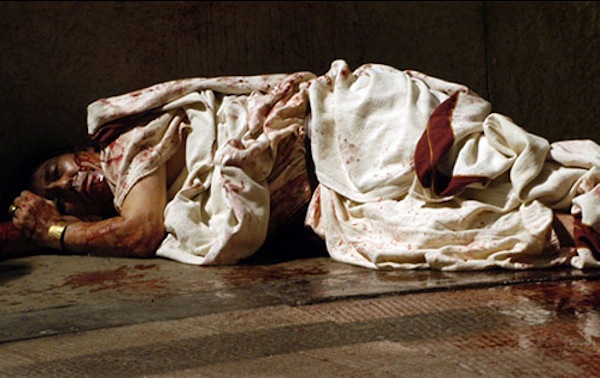 In Girardian terms, Rome before the murder is in the “hallucinatory state” of a sacrificial crisis. “[E]xhalations whizzing through the air” light the night, and lions whelp in the streets. The air itself is poisonous; Portia rebukes Brutus for exposing himself to “the vile contagion” of the “rheumy and unpurged air.” For Girard the sacrificial crisis comes not, as the conspirators would have it, from differentiation—Caesar’s ambition—but from a loss of differences. People turn into “monstrous doubles,” locked in “mimetic desire” that plunges them towards cycles of “reciprocal violence.” Julius Caesar is peopled with doubles: Caesar and Brutus, Brutus and Antony, Antony and Octavius, Cassius and Brutus. “When violent hysteria reaches its peak the monstrous double looms up everywhere at once,” leading to the comic horror of the scene in which the poet Cinna is murdered for his namesake by the mob.

But the doubling is only half the story, since Shakespeare is at pains here to create distinct psychological portraits. Caesar is painted by Shakespeare as vain, changeable, easily spooked and so self-regarding that he only speaks of himself in the third person. And yet he’s astute enough to paint his own psychological portrait of Cassius. Though it’s not enough. Cassius is larger than Caesar knows, more various and complex. It’s a minor theme of the play. In Act V, Antony boasts of the rebels, “I am in their bosoms, and I know/Wherefore they do it,” but his guess is wrong. Even we as audience can never know enough about these men. With the finely shaded interiority of Brutus, Shakespeare takes a step towards the next tragedy, Hamlet. In both dialogue and soliloquy, Brutus reveals a person “with himself at war.” But there’s too much of Brutus: he’s honorable and ambitious, haughty and humble, quick-tempered and loving, moved by music and books, but unable to grieve for his wife (“Speak no more of her.”). Brutus is where Shakespeare is heading: capturing the unresolvable nature of human personality, the way any human personality shifts in and out of view as we watch.

There’s a puzzle in Shakespeare. He has a good Elizabethan’s anxious belief in the importance of order, but he can’t resist poking at that order, questioning it. Early in his book, Girard gets at this paradox. He cites Ulysses’ speech in Troilus and Cressida about “degree” or hierarchy which keeps everything “in its authentic place.” But degree, says Girard, is “secretly acknowledged as arbitrary.” Knowledge of that arbitrariness seems to come with self-consciousness: a consciousness of self as distinct from the structure. It may be Shakespeare’s insight that, in a world peopled with Brutuses and Hamlets and Shakespeares, the sacrificial crisis never ends.