On the Run with Mary by Jonathan Barrow 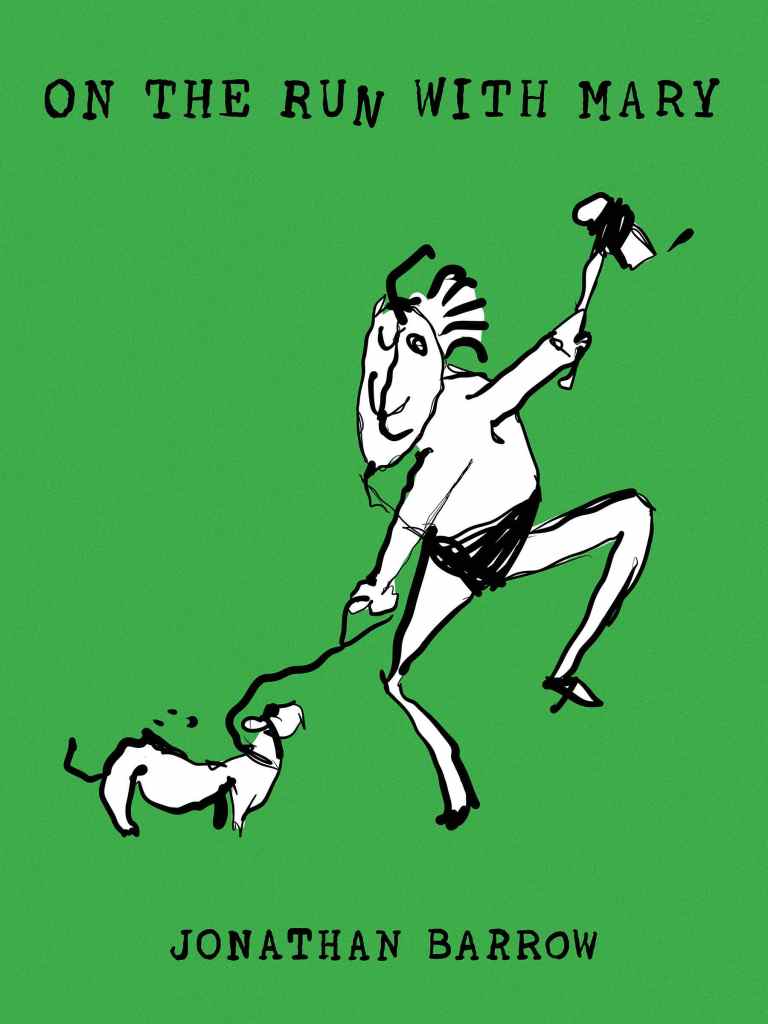 The manuscript for On The Run with Mary was found the day after author died in a car crash. It was 1970, and Barrow was 22. Barrow’s brother had found the manuscript in a desk drawer, with a fresh page still in the typewriter.

To add more bizarro, Barrow was to be married two weeks later, turning his “save the dates” for a wedding into those for a funeral. A tragic story for Barrow, who tells a tale even more tragic, disturbing, and grotesque in his novel On The Run With Mary.

Barrow’s 115-page book follows a young narrator as he escapes from boarding school and navigates the unforgiving streets of London. While waiting to board a train, the narrator meets Mary, an old, talkative, alcoholic dachshund. The frantically told narrative then becomes about survival as the traveling duo pursue freedom from the boarding school’s Headmaster (who manages to pop up randomly) and the obscene, perverted adults that plague the world around him.

There’s a serious sense of perseverance in On The Run – despite all the horrors, troubles, and unsightly deaths the narrator sees, he keeps going, his spirits not yet affected by the horrific world around him. The constant movement of the plot doesn’t give the narrator – or the reader – the chance to sit and let the action sink in, which gives the prose a strangely lighthearted tone.

The narrator finally shows signs of unease more than halfway through the book when he says, “I am tired by the ceaseless commotion that now forms such a major part of my life…the daily strain is too much. I am sorry to be so dreary.” The narrator’s apology is one of the few softer, genuine moments in book, a rarity in between scenes of defecating, sexual advances, boiling flesh, giant rats, and profuse amounts of vomiting. The other caring, tender moments happen when the narrator is interacting with animals, whether it be taking care of and protecting Mary, or meeting other animals along the way, stopping to grieve when any of them die (an emotion not reserved for any human death in the book). Animals come to the duo’s rescue several times, saving them from plane crashes and drowning in rivers. In this novel, humans are mean, twisted, perverse, and animals are sweet, caring, and a victim of human cruelty, much like the narrator.

The narrator’s “I’m sorry to be so dreary” apology might also be more than a brief introspective moment. On The Run With Mary has also been speculated to be Barrow’s suicide note, as he makes a strange prediction about his own death. Halfway through the book, the narrator finds himself delayed by a wedding crowd outside of a church, who are all left horrified after the bride comes down the aisle in a coffin, turning the wedding into a funeral. It is eerie and almost beyond coincidence that Barrow himself turned his own wedding into a funeral just after finishing the novel. In an interview with the Daily Mail, Barrow’s brother says, “I do not know, or care, what such scenes really signify. It certainly indicates that there was an extraordinarily dark side to Jonathan. Did he have any idea about what was going to happen to him the moment he finished this book? If so, was he profoundly morbid or wonderfully brave?”

After the wedding/funeral scene, the book becomes much more chaotic and absurd. The narrator delivers a baby on a bus from a pregnant man, is trapped in a sewer and can look up and see through toilets, runs into a gang of large talking rats, even crashes a plane into a field of young boys and kills almost all of them. The sentences become random, gory, and frenetic, with profanity being used loosely and often.

The book ends with the narrator seeing Mary off to a maternity home and alcoholic center, as Mary confesses she is five months pregnant, but will not stop drinking. The narrator’s sweet affection for Mary created speculation that Mary’s character was mirrored after Anita, Barrow’s fiancée, who also died with him in the car crash. Barrow’s entire novel has been called a “love letter” for the whirlwind romance he had with Anita, his love-struck state giving him the perseverance to manage day-to-day life. Intentions aside, On The Run With Mary is a complex narrative much deeper than what could be viewed as an absurd, romping story about a young boy and his talking, alcoholic dog. At its core, it’s a tale about being able to bear the evil and horrors of the everyday, as long as the ones you love are close by your side.

Rachel Kolman (Episode 85) received her MFA in fiction from the University of Central Florida. She currently teaches composition at Valencia College and Seminole State College. She’s also a barista at Vespr Coffeebar and can make a mean cup of joe. When she’s not grading papers and drinking coffee, she’s probably watching Netflix and eating Vietnamese food.