I’ve decided to deviate from my survey of Kenneth Branagh films lest this guide get too tedious, especially since his miserable Love’s Labour Lost is lurking for me like some malicious ghost. (The very prospect scared me away for a month.)

Instead, I pivot to that first British actor and director whose iconic relationship to Shakespeare on film is an essential part of his mythos: Laurence Olivier.

I must confess, your favorite Shakespearean rogue took a long time learning to love Olivier. When I was growing up, when dinosaurs freely roamed the earth, his name itself signified that elevated cultural sophistication that no reasonable person would want to inflict on himself. In my senior year of high school, my excellent teacher, Ms. Musgrave, showed us his grainy black and white film of Hamlet, which had terrible sound quality that diminished Olivier’s greatest strength: his voice. And Olivier was not a method actor, so that to me the whole thing seemed deeply imbued with affect. He was a traditional thespian, for whom how to speak and where to stand were paramount over sense-memories and emotional discovery. Although I have tended to exaggerate this quality.

My colleague Kevin Crawford, a peerless Shakespearean actor himself, harshly poo-pooed my poo-pooing of Olivier. What I didn’t know then was that Olivier is a more impressive director than he is an actor, and he is a better actor (and this is obvious to me now) than I gave him credit for.

Richard III is his best film.

The setting for this film is tradition, some version of historically accurate with a hint of storybook whimsy added, like the giant crown in the eaves of the castle that looms over the proceedings of the court.

Richard III is a hunchbacked, malformed man who is second in succession to the throne when his oldest brother becomes king after a period of civil war. As a soldier, as a leader of arms, he had purpose, but in peacetime he has nothing but his own loneliness and worthlessness to look forward to. So he begins to plot his bloody way to the top. 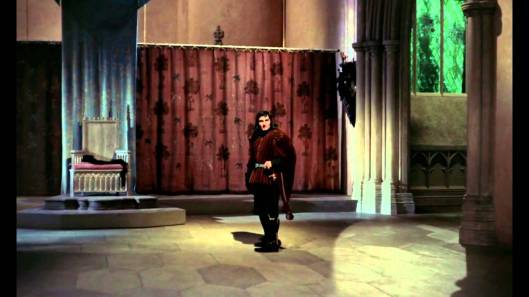 Richard is a bad character, like a two-dimensional vice character that Shakespeare might have plucked out of a morality play and given psychological depth to. And Olivier, in a striking soliloquy that is filmed in a single take, looks us in the eye and confides his great frustration, his sense of honor, and his plans to us, the audience.

That he trusts us with this information makes us feel gratified, and perhaps a bit implicated, as he warns us of what he will do to his family. Olivier’s portrayal is nuanced, letting us understand how much he might feel conflicted by this vast impulse that has taken him.

One of his schemes is to woo and marry the Lady Anne (Claire Bloom), whose father and husband both died by his hands in the civil war preceding the play.

He begins this suit over the coffin of her husband, Edward. Shakespeare’s psychology is fascinating. Richard is wooing a beautiful noblewoman, which he perhaps has the nerve to attempt since the odds of succeeding are so low that failure should be considered less important than the audacity of the attempt.

Considering the context, Lady Anne is not receptive. But Richard is unrelenting in asserting his love for her, and makes himself vulnerable to her vengeance if that means making her happy. He forces her to choose to love or murder him.

Is it the agency he grants her, her own grieving weariness, or perhaps an inkling that for his vulnerability, for his devotion, for himself, that makes her relent, and accept his proposal?

In a romantic comedy, this would be the happy ending.

But Olivier’s Richard III also shows us the joys to be found in wickedness, and he will boast of his victory over love to us.

But the real relationship of Richard III is between Richard and his willing conspirator, the Duke of Buckingham, played to perfection by Ralph Richardson. 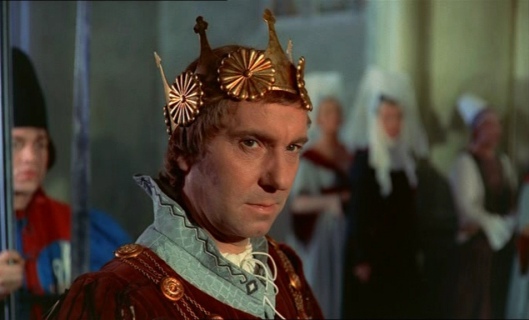 Olivier and Richardson are so reactive to one another’s performances that our joy in their Machiavellian schemes turns into great fun, until Richard decides to start bumping off children.

There are so many great performances in the film, including John Gielgud as Clarence, the nice, middle brother whose innocence runs the risk of being sentimentally intolerable. If Richard’s eldest brother, King Edward IV, is a bit corrupt, or at least flaky, Clarence’s assassination gives us reason to pause in our admiration of Richard.

Claire Bloom as Lady Anne is astoundingly good, in one of the most difficult parts of all of Shakespeare. If we don’t believe that she has truly, psychologically capitulated to Richard, then the rest of the story doesn’t matter.

Olivier gives Richard a surprising amount of heart, and the vulnerability he has shown Lady Anne we will also see from time to time, when he isn’t scheming, even when he has committed to being a villain. Olivier’s Richard can know fear.

It is a shame that I forsook Olivier for so long. His acting was amazing, but he was generous as an actor, and surrounded himself with equally talented people. And for all my expectations that he was somehow atavistic in supporting a historical sense of Shakespeare, Olivier possessed an artist’s eye in interpreting Richard III, and also in his Henry V. In R3, he rearranged scenes, changed lines, made much visual use of Mistress Shore (the extramarital consort of Edward IV). Perhaps Olivier is not the place to start for fans of Shakespeare on film, but among all the Shakespeare films I’ve seen, this version of R3 has grown on me the most, and is the most rewarding one to put in the Blu-ray player once more, and hit play.