The Curator of Schlock #171 by Jeff Shuster

Happy Valentines Day everybody from the Curator of Schlock! There are some who would argue that I’m not a romantic, but that simply isn’t true. Heck, I did a whole Nicholas Sparks adaptation month for the blog back in 2012. I still ball my eyes out each time I watch The Way We Were (which is at least once a month). For this Valentine’s Day, I’m serving up something special: 1981s My Bloody Valentine from director George Mihalka. Sure, it’s a slasher movie, but it has a love triangle subplot going for it. 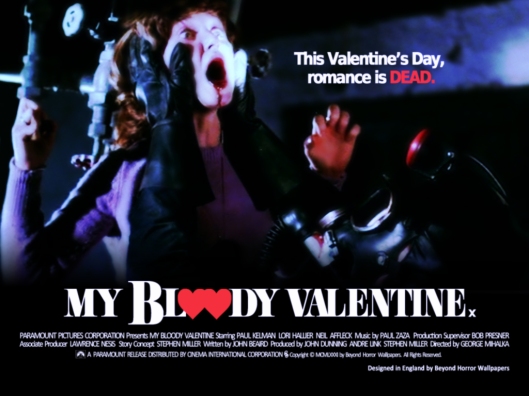 By the way, this is another one of those Canadian slashers, but at least this one makes no bones about the fact that this story takes place in Canada, Nova Scotia to be precise. So you’ll be hearing a fair share of “aboots” in this motion picture, but it’s all good. A Canadian was nice to me this week so I’ll lay off my usual jabs. Plus, we need to recognize Canada’s contribution to the horror genre. These slasher movies are ultimately just gory whodunits. And there’s probably no finer example than My Bloody Valentine.

The movie takes place in the small mining town of Valentine Bluffs, a town with a deep, dark secret. Many years ago some miners got trapped in the mine while their supervisors were getting all liquored up at the town’s annual Valentine’s Day dance. It was days or weeks before they were able to dig through the rubble to get those men out. They found only one survivor, Harry Warden, devouring the flesh off the foot of one of the dead miners. Don’t worry. The cold air down there probably preserved the bodies so Harry wasn’t eating rotten flesh. That would be beyond the limits of good taste. 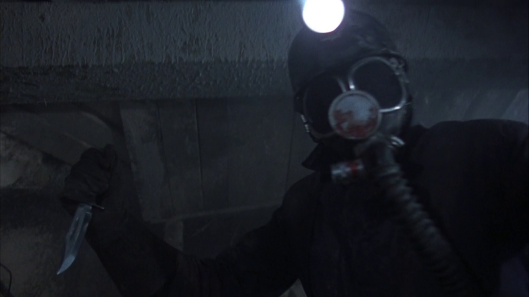 I guess young Harry must have snapped after that ordeal, because he proceeds to dress up in his miner’s outfit (complete with creepy gas mask) and go on a killing spree. He drives a pic axe into the chests of his old supervisors and proceeds to rip their hearts out. Harry then placed those hearts Valentine’s candy boxes, leaving the boxes next to the punch bowl at the next Valentine’s ay dance. The town locks Harry away in a mental institution and cancels all future Valentines Day dances. This Harry guy is a bit of a party pooper. 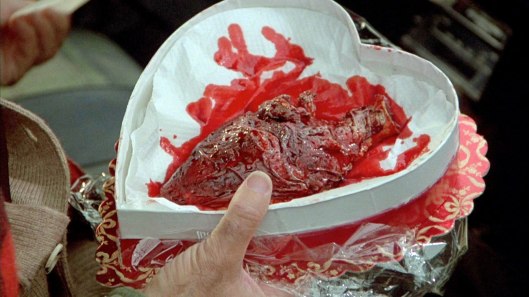 Twenty years go by and the town decides to finally have another Valentine’s Day dance. And wouldn’t you know it, a bloody human heart gets sent in a Valentine’s Day box to the mayor of Valentine Bluffs. Could Harry, the cannibal, be up to his old tricks? Maybe it’s a new killer trying to ruin the fun for everyone. You’ll have to watch the movie to find out.

Oh, and there’s a love triangle between one of the local girls and two losers. There’s also a mustached man who cooks Hungry Man dinners over the top of car engines. This movie has something for everyone.