Why? Because this blog needs more zombies!

So it became apparent to me upon watching the trailer for The Zookeeper’s Wife that the film is actually about the Nazis invading Poland. Who knew? I hope the movie ends with the zookeeper’s wife leading an army leopards, baboons, and giraffes against the occupying army. That would be cool. I guess this week I’ll have to get back to covering movies I’ve actually watched. You know what movie I haven’t watched yet? La La Land. What’s the reason as to why I haven’t watched it yet? I…don’t…care…about…La…La…Land. That movie is for namby-pambies. 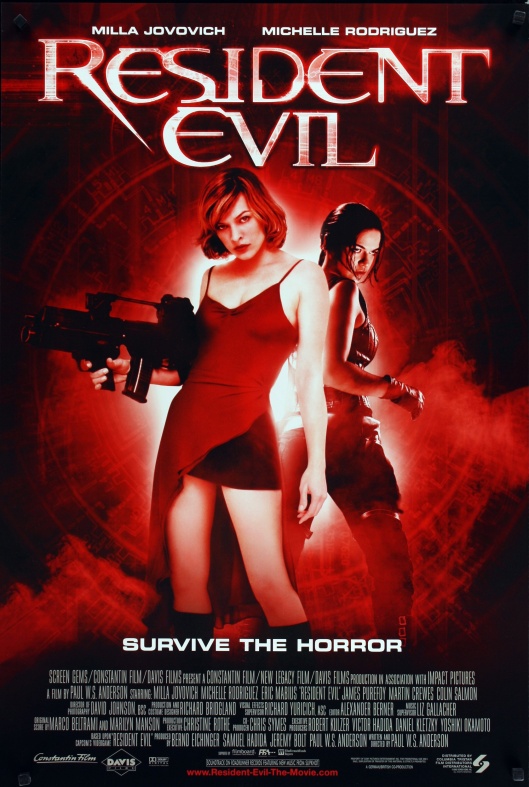 You know what movie isn’t for namby-pambies? Resident Evil. I bought the Blu-ray set for fifteen bucks so we’ll be covering this series for the month of March. There are worse ways to waste one’s time other than watching Milla Jovovich kick some zombie butt. Where do we begin? The movie starts out in some secret lab run by the Umbrella Corporation, a company involved in bioweapons research. Someone steals some green and blue vials, smashing one of them before getting out of dodge. Some kind of virus or toxin escapes up the air vents. Suddenly, all of the workers get locked inside the facility. Poisonous gas sprays out, killing many. Others drown in airtight labs after the sprinklers go off.

The poor suckers trapped in the facility’s elevators are subjected to free-fall. No one survives.

The next thing we see is Milla Jovavich waking up in a shower, naked. She wraps the shower curtain around herself and proceeds to walk around what is one of  the creepiest mansions I’ve ever seen. She finds a slinky evening dress laid out for her on a bed and slips it on. Some guy in a baby blue dress shirt grabs her. Then a bunch elite soldiers in tactical gear and gas masks smash through the mansion windows. The soldiers stick the guy in the white shirt in handcuffs. He screams out that he’s a cop. They ask Milla Jovovich’s character to give her report, but she doesn’t know what they’re talking about. She has amnesia, most likely from when the mansion’s defenses kicked in and sprayed her with knockout gas while she was in the shower.

Okay. Before you get confused any more (or before I get confused any more), I’ll explain what’s going on. The name of the lab is The Hive and it’s kept beneath the grounds of a mansion on the outskirts of a town called Raccoon City. An artificially intelligent computer known as The Red Queen controls the Hive. Milla Jovovich’s character’s name is Alice. Michelle Rodriguez plays Rain, a tough soldiers with an attitude. The other actors escape me, but I recognized one of the dudes from those Brosnan-era Bond films.

So the Red Queen killed everyone underground because a zombie virus escaped. This virus is known as the T-Virus. Maybe the T stands for Terrible since that virus is indeed terrible. I’d say the Red Queen is terrible, but she sounds like an English schoolgirl, and English schoolgirls aren’t terrible. She does end up slicing up several members of the team with a super laser at some point. The Red Queen tells them that they’re “all going to die down here.”

The English schoolgirl computer must have been referring to the hoards of zombies skulking about the underground lab. We get some kung Fu zombie action courtesy of Milla Jovovich. Unfortunately, it’s just her doing kung Fu on the zombies and not the other way around. There are zombie dogs too. Milla Jovovich manages to kick one them right in the kisser.

Members of their little group aren’t who they say they are. There’s a betrayal. Jovovich fights a monster with a giant tongue. Alice survives the ordeal only to be kidnapped by Umbrella scientists and held for observation. She wakes up in another lab in the aftermath of the zombie apocalypse.