The Curator of Schlock #177 by Jeff Shuster

We’re in week five of Resident Evil month and I am dead-dog tired. Is there such a thing as too much of a good thing? Perhaps. The fact that director Paul W.S. Anderson could keep this zombie extravaganza rolling through six movies is nothing short of incredible. The fact that I was able to wade through this zombie extravaganza is nothing short of amazing. Do I deserve a pat on the back from you, my faithful readership? Yes. Yes I do.

Resident Evil: Retribution picks up where Resident Evil: Afterlife left off. Alice (Milla Jovovich) was fending off an attack by the evil Umbrella Corporation on the freighter known as Arcadia. Oh, I forgot to mention in my last review that Alice owns a gun that can shoot quarters at her enemies. That’s pretty nifty. Anyway, the attack is being led by Jill Valentine (Sienna Guillory) from Resident Evil: Apocalypse. She’s possessed by one of the red beetle robots, the same kind that were possessing Claire Redfield in the last movie. 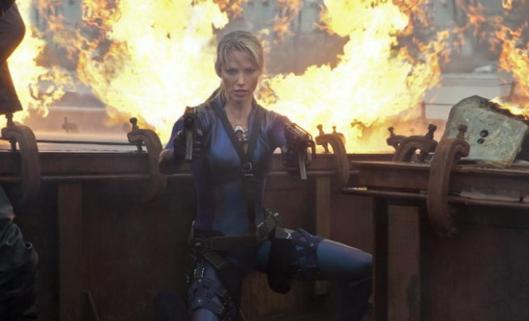 Did you remember the last movie? No need since Alice gives the audience a recap of the first four movies. I wish other movie series would do that, give recaps. I can’t keep anything in those Marvel movies straight. Hell, I couldn’t keep anything in Avengers: Age of Ultron straight. I thought it was going to be a movie about superheroes fighting killer robots. Instead, I got to see Iron Man and Captain America hang out at Hawkeye’s ranch, talking about their feelings while Thor waded around in a wishing well. I don’t get movies sometimes.

Anyway, Alice gets knocked off the Arcadia, falls into the Pacific Ocean, and wakes up in some kind of suburban housewife fantasy. She’s married to Carlos (Oded Fehr) and has a deaf daughter named Becky (Aryana Engineer). Zombies break into their house and kill Carlos. Interesting. Wait a minute! Didn’t Carlos die in Resident Evil: Extinction? She runs into Michelle Rodriguez on the street, too! Didn’t her character die in the first movie? Something fishy is going on here. 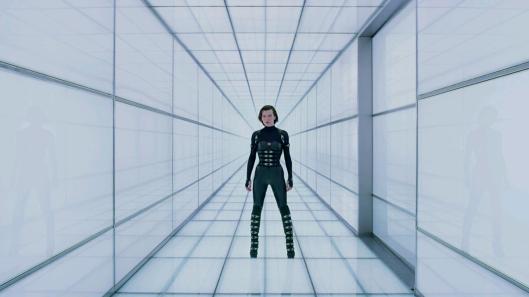 Alice then wakes up in a glowing white room. Jill Valentine is interrogating her, asking why Alice betrayed the Umbrella Corporation. We learn later that the Red Queen, the evil computer that looks and sounds like a little English girl, is controlling Jill. Ada Wong (Li BingBing) helps Alice navigate an Umbrella complex in the middle of Russia that contains domed theme-park versions of New York, Tokyo, and Moscow. 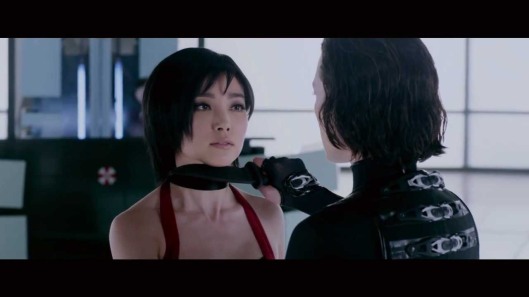 See, the Red Queen can create clones of sixty Umbrella employees, give them basic memories and personalities, and then let loose the zombie hoards on them. This structure was created to simulate the effects of a zombie apocalypse so the Umbrella Corporation could sell their bioweapons to the highest bidding superpower.

Ada Wong works for Albert Wesker (Shawn Roberts) who is now one of the good guys. Huh? He was so evil in the last movie. Wesker has sent a squad in to rescue Alice. Unfortunately, this squad runs into to some Soviet zombies, driving tanks and brandishing machine guns. 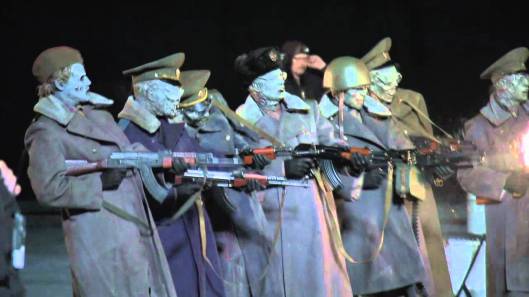 I think there’s a super zombie version of Michelle Rodriguez at the end of the movie. I’m tired.

Your Curator of Schlock is and will be taking the month of April off. He will return in May. Big things are in store for the Museum of Schlock this year. Can’t say anything just yet. You’ll have to wait and see.