Songs in Shakespeare can be a tricky thing since his texts share lyrics, but not melodies. The normal theatrical approach to these songs is to keep them brief, and not to commit to melodies that are catchy or especially even musical, which kind of defeats the presumed delightful fucking purpose of songs to Shakespearean dramaturgy. Musical creativity is not generally a priority for most troupes, since few could have a budget for commissioning a composer.

Trevor Nunn is one of those rare figures in Shakespearean adaptations: someone who belongs to both the Shakespeare and musical theater communities. This may be why Shaun Davey was enlisted to compose music that could creatively compete (and so complement) the poetry and prose of Shakespeare’s text.

This is crucial for Twelfth Night, whose very first lines begin with an emo complaint from poor, love-stricken Orsino:

If music be the food of love, play on;
Give me excess of it, that, surfeiting,
The appetite may sicken, and so die.

Another reason why music is crucial to the spirit of Twelfth Night: the play was written to be performed as a revel for an actual Twelfth Night (AKA, the twelfth day of Christmas–seriously).

I leave it to you, gentle reader, if you wish to look for the semiotic/symbolic traces of the holy associations with Twelfth Night in the play. (Please leave your analyses below in the comments. Remember that the play begins with shipwreck.) 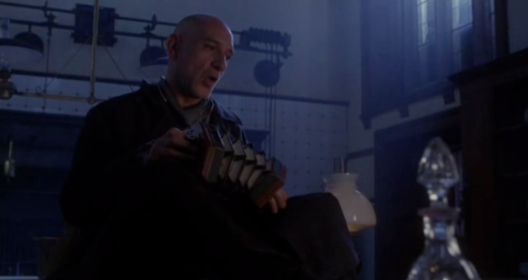 The elevation of the music of the play coincides with the elevation of Feste, the clown, in this adaptation, with Ben Kinglsey playing the part. Feste is interpreted as not only as a sardonic commenter about the society he lives in, using his wit and lowly status to convey more truth than is otherwise socially tolerable—this Feste is also like a chorus and the conscience of the play.

The song with which the play closes—a lilting meditation on the role of entertainment in the meaning of our lives—becomes a framing device for the whole story in this film:

When that I was and a little tiny boy,
With hey, ho, the wind and the rain,
A foolish thing was but a toy,
For the rain it raineth every day.

Without imagination, we would not be able to endure life. Shaun Davey’s undulating melody works as a leitmotif with enough theme and variations that the film gels miraculously.

As the other song in the middle of the film will demonstrate, music can also articulate our sorrows, which is also a consolation, if temporary, and helps us to understand ourselves. Orsino, in particular, is looking for answers.

The cast is stunning. Helena Bonham-Carter plays Olivia. Nigel Hawthorne plays Malvolio. Sir Toby Belch, one of Shakespeare’s greatest drunkards, is played by Mel Smith, who you may remember as the torturer’s assistant in The Princess Bride.

Richard E. Grant plays that caricature of an upper-class twit, Sir Andrew Aguecheek, with delicious abandon, as if to put such a typecasting of himself away for good. Imogen Stubbs manages her Viola to gender-bending poignancy. Imelda Staunton plays Maria to matronly perfection. Toby Stephens actually makes Orsino compelling despite the character being something of a High Romantic tool.

As I have said too often in these reviews, Shakespearean comedy resembles Shakespearean tragedy with the exception of the pile of corpses that ends a tragedy. This film works wonders with that dialectic. It can save your life.

But this play, and this version of this play, are wickedly funny. Shakespeare’s critique of gender, social class, and the social norms by which we express our emotional lives is more contemporary than ever.