Stars, man. Also, Starman. We can bring in the 70s music scene with the crippling depression of the Altamont Free Concert, or with a blast of cosmic literature radiation that would seep its way into popular culture throughout the decade. And this explosion of new kinds of music, of course, shouldered by a single musician who would come to embody the blending of science fiction and music more than anyone else: David Bowie. While sci-fi music is at the heart of Jason Heller’s deep cut dive through the 70s, Bowie is the ever shifting soul that towers over all. 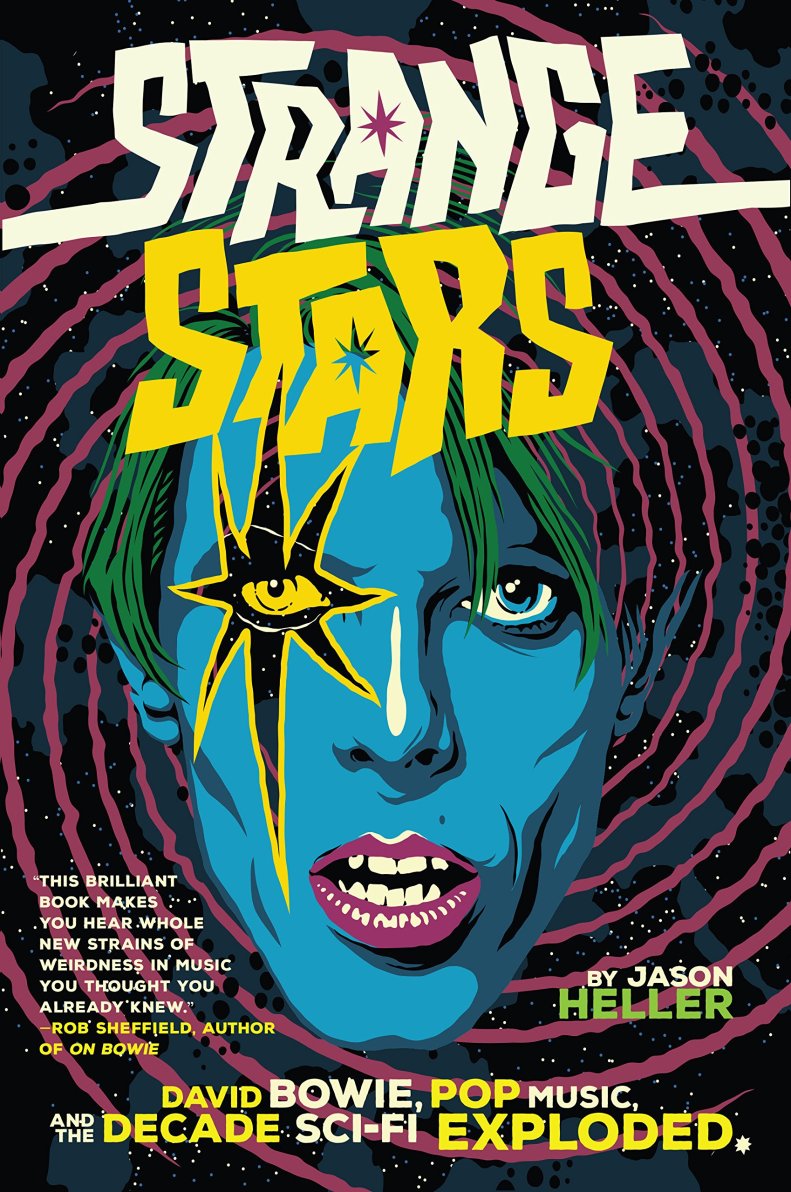 Broken up year by year, Strange Stars takes us on a tour through the decade to witness the evolution of sci-fi music. We go from novelty to subtle references to wearing influences squarely on sleeves. Strange Stars is just as much a story about the music as it is a story about the growing changes in popular tastes and culture at the time. Heller never lets us forget that throughout the book. Changes in taste and accessibility act as a driving force behind popular music. After the novelty songs of the 60s ended, bands like Yes, King Crimson, Jefferson Airplane/Starship, even Neil Young begin this slow incorporation of the science fiction stories they love. But it isn’t just dropping names that makes this a different kind of book. Heller dives through interviews and adds a little touch of personal conjecture to explore. Why do these musicians add touches of sci-fi to their work? Their love of the stories is a driving force, but they do it also as a way to communicate ideas of technology, interstellar travel, and dystopia as they become more relevant throughout the decade.

Strange Stars is a book that’s as well researched as it is written. It’s thorough in terms of the music it includes, the books they reference, and the ways in which science fiction bled itself into the music of the 70s. In the case of Michael Moorcock, we seem him joining with the band Hawkwind to contribute lyrics and put on live sci-fi concerts. The exploration between music and science fiction here is something quite often untapped in terms of historical analysis. It wasn’t just the works of Heinlein, Dick, and Orwell that influenced the majority of these musicians. They move beyond influence. In the case of P-Funk, we’re looking at a group that created the very science fiction they’ve come to emulate. And that’s one of the core aspects of this book that we take away. Imitation and homage are fun, but creating something wholly new in the genre ends up being more rewarding.

Jason Heller brings us a new kind of insight on a decade in music that has been analyzed and examined longer than I’ve been alive. But it’s the twist that he brings to his analysis, the inclusion of science fiction as a driving force, that makes it something special. It is the kind of book that’s filled with insight on how these bands brought up their sci-fi influences as well as histories of bands that came and fell in the course of the decade. Strange Stars is history, it’s literature, it’s musical, it’s trivia (like I still can’t get over the fact that Patti Smith wrote lyrics for Blue Öyster Cult), and it’s showing how everything grows from something else. As the 70s ended, the sci-fi niche these bands established earlier in the decade became the mainstream. Science fiction became the world.