The Algorithm That Ate the Dick Pic

It all started with a dick pic. This one to be precise. 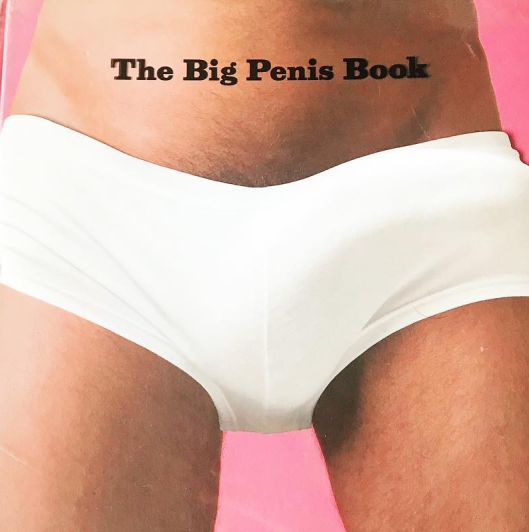 It’s the cover for Taschen’s The Big Penis Book. I posted it in response to a friend’s Facebook post—from here on referred to as Facepalm Booklet.

The friend wanted to know which book I’d put in his ideal library and, feeling rather wicked, I posted the pic that brought about my demise. Within seconds—20 to be precise— a message popped up, telling me I’ve been excommunicated for 30 days for contravening ‘community standards’.

I was shocked. Outraged. I objected. But my objections fell on deaf auto responses.

It appears the ‘community’ of more than 100 million people who use Facepalm Booklet daily were outraged by my untoward behavior. Because, you see, they have incredibly high ‘standards’ in their dealings with their ‘friends’. They neither see, nor hear, nor speak evil. And I most certainly don’t meet the benchmark.

The sheer hypocrisy bugs me. It’s acceptable to post misogynist, racist, homophobic, bigoted bilge. It’s okay for people to attack each other in the most vile, personal terms. But it’s not okay to post pictures of nudity, unless it’s art or educational.

This raises the question of who decides what constitutes these abstract and highly contestable nouns and adjectives? And why is the elevation of mind and soul placed above carnality? Which mental at Facepalm Booklet’s Mentlo Park headquarters decides? (Don’t get me started on the name of the street, Hacker Way.)

I’d argue the Taschen cover is art. Possibly even highly instructional. In the right hands.

Certainly, Hindus see it my way. Sex, for them, is a gateway to spiritual elevation. That’s why their temples are plastered with vivid orgiastic scenes of contorted bodies doing it every which way but loose. I bet they’re very loose after they’ve tried all the positions in the Kama Sutra.

Bizarrely, female nipples are not allowed on Facepalm Booklet. Male nipples are. This, of course, means that the people who make the rules haven’t sexualized the latter in the manner of the former. Which in turn implies the rules are made largely by men. A male nipple is of no sexual interest to a heterosexual man. But it is for a heterosexual woman, as it is for a homosexual man.

There are countries in which the sight of a woman’s ankle or the back of her neck is a daring come-on. Men in certain religious communities in North America are driven wild by a woman’s elbow. The revelation of a single strand of female hair can enflame a man’s passions in countries where the burka is obligatory for a woman. Does Facepalm Booklet censor these body parts as well?

What rails is this. The picture I posted does not contain nudity. It’s an image of a tumescent male member, tilting wildly to the left, encumbered by straining white briefs. You don’t see anything. It’s left to the imagination. Though I must say the special 3D cover will poke out your eye, if you dare to put on the glasses that come with it.

Far as I know, no one complained about the picture I posted because no one saw it. An algorithm, that invisible, electronic nemesis of our online prowling, tracked it down, deleted the dick pic that wasn’t a dick pic, and hoisted me out with a slap on the wrist. That’s the same algorithm that happily mines our data for marketing purposes—happy to sell you crap you don’t need, but don’t get too big for the cheap boots we sold you via Masorini.con.

In retaliation, I got rid of the Faceslap Booklet and the Messenger apps from my phone and iPad, and logged out on the desktop. No social media for a month. Great. I can work without distractions. And instead of checking my feed, I can read, watch a movie, go for a walk…

As Friar Lawrence says in Romeo and Juliet, ‘Hence from Facebook you are banished. Be patient for the world is broad and wide.’

In the first week I was doing quite well, actually, with only the very slightest withdrawal symptoms. Until the emails started to arrive.

Now that I’ve been kicked out, Faceslap Booklet is keen to draw me in again. It keeps asking if I’ve seen so and so’s comments on so and so’s post. Hey, look, so and so has posted on a group you follow. You’re tagged in such and such post. We care about you and your memories.

Sure, you do. You care about the marketing potential I represent, more like.

I’ve not received these notices before. They started coming when I turned my back on the great weevil.

My attitude is: who cares, bitch? You banned me for nothing. You made it so I can see but not reply. You pushed me to the outer limits, rendered me invisible, like a ghost, able to observe but not take part. And now you want me to come see the fun everyone is having at the party to which I am not invited? Hell, no. Sounds like you need me more than I need you. I ain’t no Romeo who thinks to be banished from Facebook is to be banished from the world.

Now excuse me, I’m going to play with my Taschen 3D cover.