The Curator of Schlock #268 by Jeff Shuster

Michael Caine is Harry Palmer in The Ipcress File!

I discovered an old audio clip of Orson Welles going on a furious rant while doing a commercial for frozen fish sticks. The script called for Welles to say “crisp, crumb coating.” Or was it “crumb, crisp coating”? Regardless, Welles yelled at the director. I guess those words don’t roll off the tongue so well. Kind of like the word Ipcress.

Kind of reminds me of watercress. Watercress sandwiches. I don’t get the English.

Tonight’s movie is 1965’s The Ipcress File from director Sidney J. Furie. The movie is adapted from the novel, The IPCRESS File by Len Deighton. Why Ipcress is in all caps for the novel and not for the motion picture remains one of history’s greatest mysteries. The film was touted as the “Thinking Man’s Goldfinger” and was produced by one of the producers of the James Bond series, Harry Saltzman. And most importantly, it was the movie made Michael Caine a household name.

Michael Caine plays Harry Palmer, a bespectacled member of Great Britain’s Ministry of Defence. That is not a typo. That is how the British spell defense. I guess when they’re done stuffing their faces with watercress sandwiches, they’re busy trying to undo the hard work of Noah Webster, but I digress. Much like your Curator of Schlock, Harry Palmer enjoys the finer things in life. He’ll buy the fancy canned mushrooms at the grocers even if said mushrooms cost more money because they have the better flavor.

Don’t be expecting exotic locales in this movie. The film takes place in dismal, dreary London. That, or the movie needs remastering in 4k. You get to see Harry Palmer shopping for his fancy canned mushrooms in a 1960s American-style grocery store, crashing his cart into other carts. That’s the closest you’ll get to a car chase in this flick. Remember, this is a cerebral Bond picture so put on your thinking cap and don’t bother waiting to ogle Ursula Andress because she isn’t in this movie. 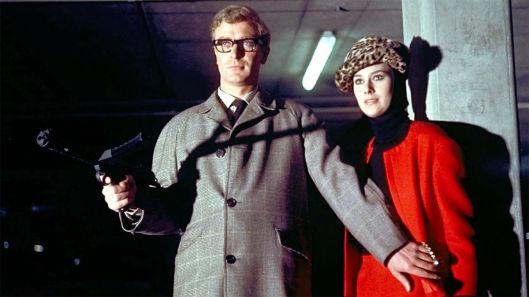 There’s some action. I think Harry Palmer gets into some fisticuffs with some bald guy before losing the tail. He accidentally shoots and kills a CIA agent at some point. I’m not sure who the bad guys are. Communists or some kind of SPECTRE-like organization? They’ve been causing scientists to quit their profession, causing a severe deficiency in British Intelligence. It’s up to Harry Palmer and they rest of the Ministry of Defence to get to the bottom of this, all while ignoring the misspelling of their defense department.

Do you like seeing Michael Caine get tortured? The bad guys have some sort of brainwashing machine they invented, tucking Harry Palmer in some kind of metal-rimmed room while blaring noise at him. Palmer keeps self-inflicting pain to avoid the brainwashing. Will he triumph? I guess he will since they made two sequels. Next week we’ll see Harry Palmer in Funeral in Berlin. Maybe 1960s Berlin will be cheerier than 1960s London.