Charles Bronson, The Evil That Men Do

The Curator of Schlock #289 by Jeff Shuster

The Evil That Men Do

Charles Bronson returns to the Museum of Schlock!

It seems like only yesterday that I began this blog. I remember that one September five years ago when I covered all five Death Wish movies.

Oh, wait. It was six years ago.

Six years of my life spent apart from Charles Bronson.

How did I let this happen? Time to rectify this misfire on my part. Time to partake in the second greatest mustache in cinema history (first place goes to Franco Nero). September is Charles Bronson Month here at the Museum of Schlock!

The movie begins with a Welsh gentleman named Clement Molloch (Joseph Maher) who goes by the moniker, “The Doctor.” They call him the Doctor because he is a real medical doctor, but he uses his medical expertise to perfect methods of torture to be used by any South American dictator with the money for his services. 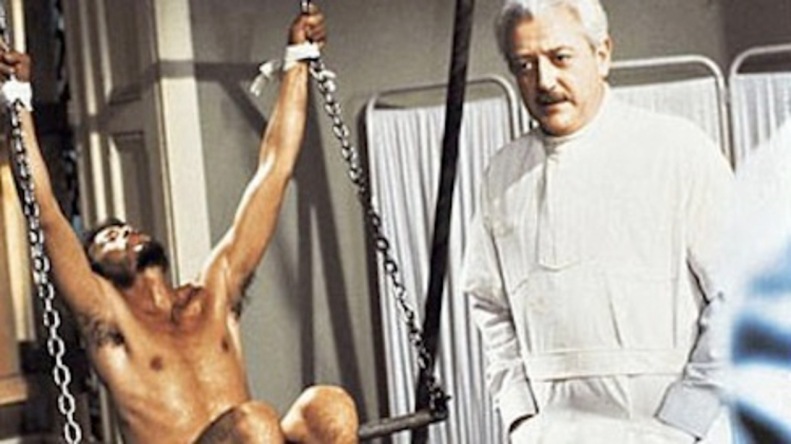 I mean this guy’s methods are disgusting. The Doctor is kind of the guru of torture. The movie begins with him electrocuting Jorge Hidalgo, a reporter who’s been investigating him. Any of you ever watch that Nickelodeon show Mr. Wizard? Remember the episode where he used electricity to cook hot dogs for lunch? This is kind of like that except with a real live human being.

Some Israelis try to assassinate the Doctor, rig a car bomb in his car, but the operation goes awry and the Doctor gets away again. A man named Hector travels to the Cayman Islands to convince a retired CIA assassin named Holland (Charles Bronson) to come out of retirement and kill The Doctor.

The Doctor is fairly evil. In fact, I might go as far to say he’s Kidnap Syndicate evil. Holland says he’s retired and doesn’t do that sort of thing anymore, but it’s not long before he flies out to Guatemala to take out the Doctor. Holland tells Hector that he wants to pose as a family man. He’ll need a pretend wife and a pretend child. Hector hooks him up with Rhiana (Theresa Saldana), the deceased reporter’s wife, and their young daughter, Sarah.

The two of them manage to catch a glimpse of the doctor at a local cockfight. Holland decides the best pathway to the Doctor is through the men who work for him. He tracks Randolph (Raymond St. Jacques), a burley man in charge of the Doctor’s communications. Holland follows Randall to the US Ambassador’s office. It seems that the Doctor has blackmailed Paul Briggs (John Glover of TV’s Smallville), the U.S. Ambassador of Guatemala, into aiding his nefarious activities.

There’s some throat slitting and ball crushing as Holland works his way through the Doctor’s organization. He manages to kidnap the Doctor’s sister in an effort to root him out of hiding. I’m not going to spoil the ending for you, but if you think the Doctor is making it to the end of this movie without a painful and humiliating death, you don’t know Charles Bronson.