Comics Are Trying to Break Your Heart #75 by Drew Barth

A Different Kind of Horror

Some old buildings emit a sense of what happened in that building decades prior, echoes of the people who called that building home. What was familiar and known morphs into something sinister. A work like BTTM FDRS by Ezra Claytan Daniels and Ben Passmore is a slow, creeping work that drips with the horror of gentrification and how a building can become something otherworldly.

BTTM FDRS centers on two friends, Darla and Cynthia, as the former begins her move to a cheap studio apartment in the South Chicago neighborhood where she grew up, the Bottomyards. At the beginning of the story, the building itself, an old manufacturing complex, attempting to eat an electrician looking at some of its outside wiring. From here, everything else unfolds. We have Gene, the creepy landlord who’s converted the building into apartments; Katherine, the woman whose home the building had been since the 70s; Charles, Katherine’s shy son who explored every tunnel and vent when he was younger; and Julio, the rapper known as Plymouth Rock. Even though some characters only get a few panels, the small bits they interact with Darla and Cynthia cement how well rendered they all become through the story.

Daniels and Passmore weave the nightmare of gentrification throughout the story in small ways—from Katherine being priced out of the home she’s been in since the 70s to Cynthia taking advantage of the credibility Darla’s new apartment gives her despite Cynthia not living there. When the apartment complex’s secret organism bursts through the walls and destroys the building, where can the tenants go now? What is left for them? 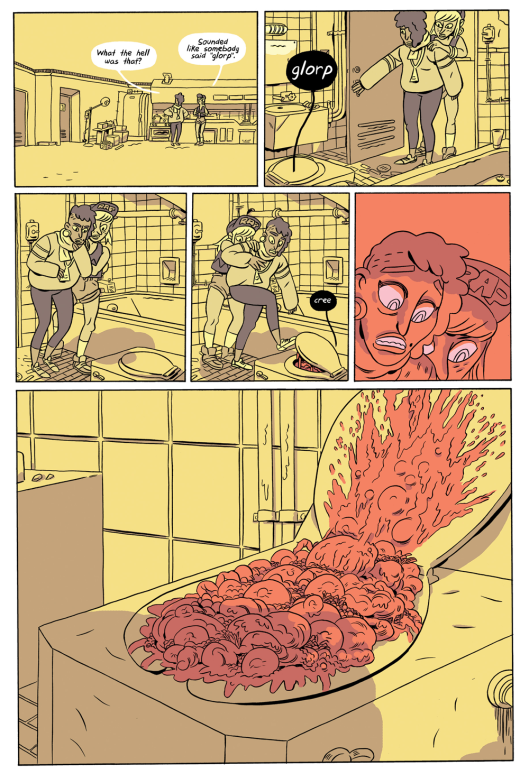 Much like last week, BTTM FDRS is the kind of story that we need right now and Daniels and Passmore are the creators we need to tell that story. Gentrification looks benign to a white audience. Comics have the power to show us the ills of our world much more viscerally than other mediums and Daniels and Passmore show us to the point where we can no longer look away. It’s why now is the time to get active—with time, money, energy—to the organizations that need our attention the most.

Get angry. Get active. Get involved. Get reading.