The Curator of Schlock #324 by Jeff Shuster

Devil Dog: The Hound of Hell

It’s like The Omen, but with a puppy in it.

I try not to be a pain, but I merely requested that maybe Jervis could make some twice baked potatoes instead of scalloped potatoes the next time he prepares some fillet mignon for me. I am the guest at this stately mansion under the request of his deceased master that all strangers be treated with kindness. And if that stranger wants a twice baked potato, it is you, the servant, that had better make it happen. Don’t give me a hard stare. I’m not impressed. 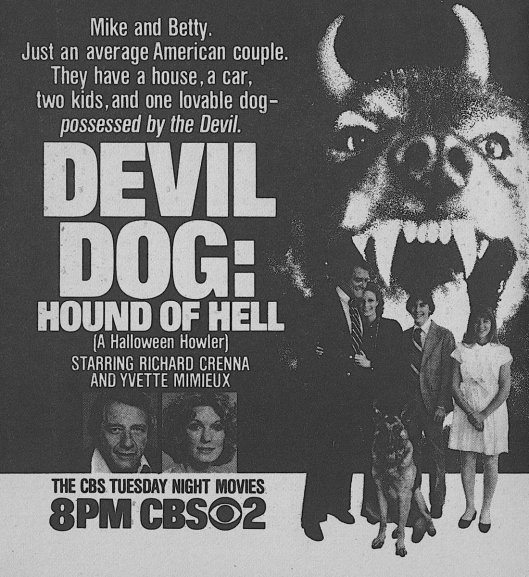 This week’s movie is 1978’s Devil Dog: The Hound of Hell from director Curtis Harrington. The movie begins with a group of devil worshippers hoping to procure a female German Shepard for breeding purposes. After purchasing a breeder named Lady for $5,000, they don the robes and pray to “Barghest.” I guess the evil spirit of the devil dog impregnates Lady. Her spawn will bring an end to Truth, Justice, and the American Way. 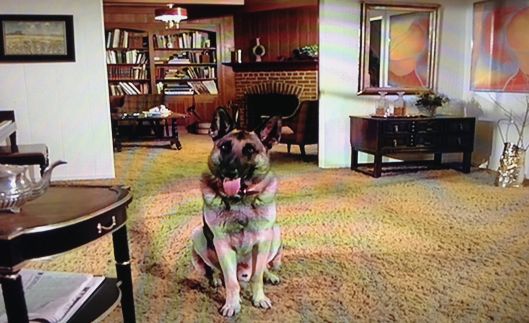 We then get introduced to Mike (Richard Crenna) and Betty Barry (Yvette Mimieux) and their 2.5 kids: Bonnie (Kim Richards of Escape from Witch Mountain fame), Charlie (Ike Eisenman also of Escape from Witch Mountain fame), and their dog, Skipper. They’re just a typical all-American suburban family. They come home one day to find Skipper dead in the street. Their nosy neighbor, George (Lou Frizzell), tells them he saw a black limousine hit Skipper and drive off. The next day a kindly old farmer shows up to their house selling apples out of his truck. He offers Bonnie and Charlie a free apple, but little do they know that he’s one of the Satanists we saw in the beginning of the film.

Also, in the back of the truck are Lady and her litter of puppies. The old farmer offers the kids the pick of the litter and they choose a male German Shepherd and name him Lucky. Everyone seems to love the new dog except the Barry’s housekeeper, Maria, a God fearing woman who think the puppy is evil! While Maria is all alone in the house praying the Rosary, Lucky’s eyes glow green and Maria’s arm spontaneously combusts. Lucky then uses his demonic powers to lock her in her bedroom and when the Barry family come home, they find a well done housekeeper.

A year goes by and Lucky is now a full grown German Shepherd. The dog manages to demonically influence the kids into being bad kids that lie, cheat, and steal. Even Betty starts to act strange, inviting her husband, Mike,  for a late night skinny dip in their neighbor George’s pool. George’s dog ends up dead and he blames it on Lucky. Then George is found drowned in his pool. Very strange indeed. Then Mike wakes up late one night to hear his family chanting and painting pictures of demonic entities.

Funny thing about this movie is that is was a CBS Movie of the Week. Even funnier is that that this movie features an Italian language track. Did they ship this movie overseas as a theatrical feature? For shame, CBS! For shame! And now if you’ll excuse me, I’m going to ring the bell and have Jervis pick me up a certain confectionary treat by the Drake’s Cakes company. I’m sure he won’t mind. It’s only one in the morning.