Comics Are Trying to Break Your Heart #106 by Drew Barth

Man, I really hope there’s nothing historically significant happening today. Anyway, let’s talk about witches and comics. There’s likely as many witches in comics as there are X-Men spin-offs, so that would warrant its own weekly article, but today I’m going to be focusing on a new witch that has come from Boom! Studios this month: The Last Witch by Conor McCreery, V.V. Glass, Natalia Nesterenko and Jim Campbell. As far as actual witches go, none actually make their appearance in this first issue, but you can feel the presence of it looming over every page and character.

The story is admirably focused. From the beginning, we’re introduced to our protagonist, Saoirse, and the idea of a witch living somewhere in the forest on the outskirts of her village. To pass through a hedge in the forest and into the witch’s territory has become something of a dare among the village children and Saoirse is more than happy to oblige before her father catches her and confines her to their cabin to tend to her sick brother. But we know what kind of character Saoirse is—she wasn’t going to sit in her house while there’s adventure outside. And if that adventure causes her brother to suddenly disappear once they finally come across an abandoned tower that may or may not have belonged to the witch? Well, hey, don’t worry about it. 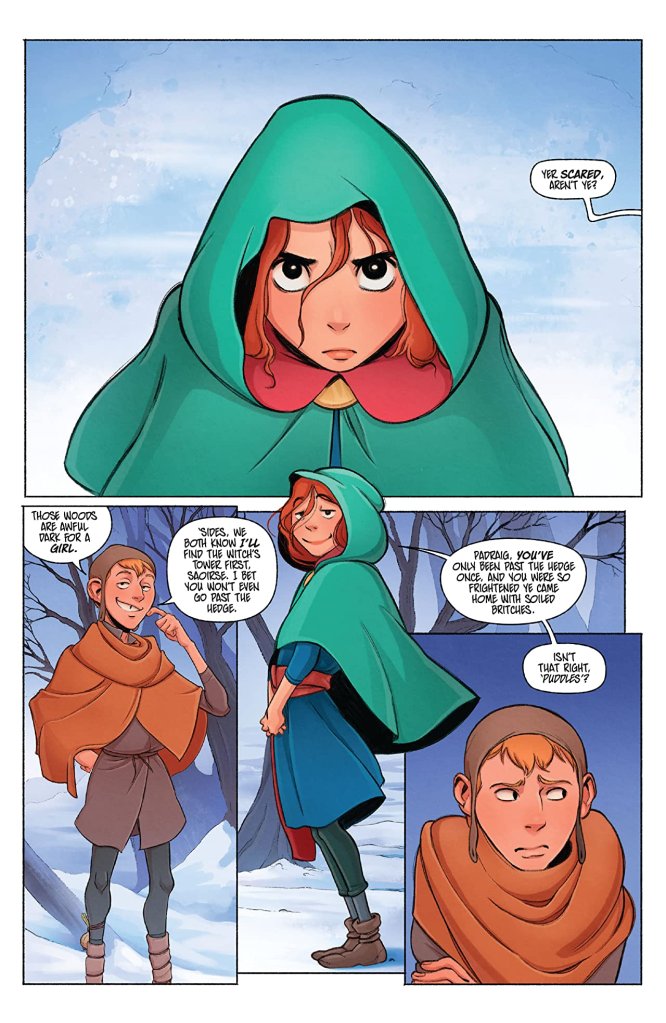 Glass and Nesterenko’s art is delightful. It feels at times like I’m watching an expressive, animated film. Every background is lush and textured, every face distinct with its emotions and intentions that you can spend multiple pages simply admiring what is on the page. But what sets the art of this series apart is the way it works so well with the tone of the story. There is no oppressive darkness here—everything is light and snow and colors that make every character pop within their panels. Even though this is a story that teeters right on the edge of something terrible in its last pages, it never loses its vibrant touch.

The Last Witch is a story to start a new year on. McCreery, Glass, Nesterenko, and Campbell are among the best in monthly comics right now. I’m excited to see where the rest of their work will go over the next few issues.