The Curator of Schlock #355 by Jeff Shuster

Gas shortage! Gas shortage! Everyone’s losing their shit over the gas shortage. I still have to figure out a way to get across the Canadian border with my unvaccinated self and my kangaroo compadre. Still, I lucked out. I found a gas station with plenty of diesel so I filled up about six Hefty trash bags to the brim and tied them up as best I could. They’re in the truck with the canning equipment. They should last me as I drive around aimlessly trying to figure out my next step.

Okay. This seems to start out as another one of those Yakuza versus Triad deals. A low level assassin named Miyuki gets hired to assassinate an officer in a Triad gang…or was it a Yakuza gang? Same difference. As Miyuki sets up the shot, another assassin named Shuuichi kills his target. Miyuki still collects the money and runs before they figure out he wasn’t the actual assassin. 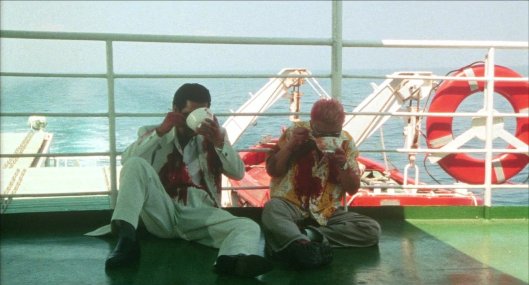 Miyuki takes a boat ride and gobbles down a noodle bowl while reminiscing about his childhood. Seems that he and his friends always saved the tofu at the bottom of the bowl for last. They would eat the tofu quickly at the count of three. Maybe it’s around then that he figures out that Shuu was his close childhood friend from the orphanage they grew up in. The two assassins meet each other again and they decide to take a trip to the island where they grew up. They visit the orphanage and stay with another mutual friend, Kohei and his pregnant wife. 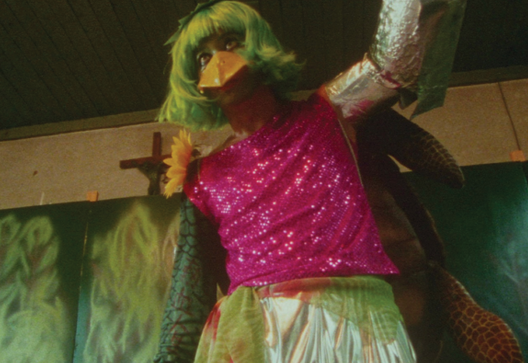 And then the two assassins decide to help out with a children’s play for the locals. What? The play is about a lion in the jungle that subsists on chocolate and bananas. The lion runs into other animals, but there’s an eccentric tortoise that threatens the harmony of the group. I thought I was watching a movie about hardcore assassins and now I’m being subjected to some bad community theater.

Interspersed with segments from the children’s play are violent gang slayings in the newly unfolding war between the Yakuza and the Triads. Oh, and I think it’s revealed that Miyuki and Shuu aren’t really human. I think they’re either extraterrestrials or fallen angels. You see, feathered wings keep poking out of their back. They also make a point of sharing their assassination fees to help impoverished people in Africa. I guess that’s a sort of moral justification. If you kill criminals for money, but then use that money to help out the poor and oppressed, is it really evil? I think I’m getting a headache just thinking about the moral complications. That or it’s the gas fumes. Maybe a cigarette will calm me down. Where did I put my lighter?