Word from the King #1 by John King

The blogosphere instantaneously shit itself sideways when Ben Affleck was cast as the next Batman. Here are some meditations on the ensuing misplaced hysteria.

1. There are actually real problems in the world.

2. No, really. There are. Instead of bitching about who has been cast as a comic book hero, be a more heroic person by paying more attention to the world you live in. The real world needs you more than Gotham or Metropolis does.

3. While Christian Bale was credibly intense, frankly, Christopher Nolan’s Batman trilogy is over nine hours of abysmal storytelling. As the Joker, Heath Ledger stole the show in The Dark Knight; the principle actors and characters were inconsequential otherwise. We needed Morgan Freeman and Michael Caine to care about Bruce Wayne because the movie gave the audience no reason to. The smart storytelling of Memento and Inception didn’t find its way into the Batmans, which were mostly boring, goofy, awkwardly sanctimonious, and (for too many moments in The Dark Knight) incomprehensible. The only reason the Chris Nolan versions seemed good was the aesthetic deprivations of the Tim Burton Batmans, which only the Joel Schumacher Batmans could make look good.

4. The jury is very much out on Zach Snyder, too. Man of Steel got a passing grade because it was graded on a scale that included Superman Returns. Snyder turned Watchmen into a mediocre film. He doesn’t do real characters well.

5. Ben Affleck may have played the lead in what is almost, ALMOST, the worst film imaginable for Daredevil (all cleft chin, cumbersome, scrunchy leather, and fight scenes that might as well have been choreographed by Sid and Marty Krofft). 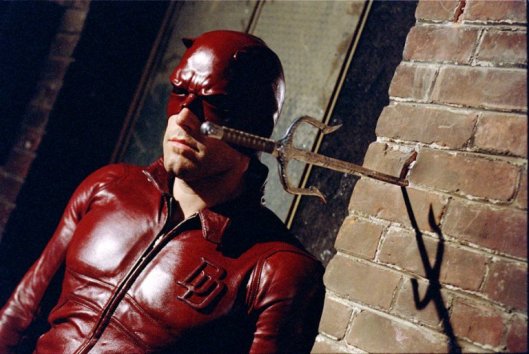 And Ben Affleck might seem oddly unlikable and unwatchable much of the time. But he can also be amazing, when he acts with affect, as someone much different than himself. He held his own in Shakespeare in Love, opposite Geoffrey Rush, Joseph Fiennes, Judy Dench, and others. And his performance as George Reeves, the original superman, in Hollywoodland is really shockingly nuanced and good.

6. Frankly, I am ashamed of myself. Go back to #2. And when you do so, don’t wear tights, and please don’t carry a weapon. The cape is optional.