Horror, Italian Horror, Jeffrey Shuster, The Curator of Schlock, The House by the Cemetery

The Curator of Schlock #11 by Jeffrey Shuster

Freud + Frankenstein= Freudstein (The House by the Cemetery)

1981’s The House by the Cemetery from Italian horror maestro Lucio Fulci starts out with a couple of teenagers getting brutally murdered in (you guessed it) a house by the cemetery. How are they murdered? Well, the one guy (we’ll call him Steve because that’s what his girlfriend keeps calling out) has half his brain falling out of his head while he stumbles around. The pair of surgical scissors stuck in his chest must be kind of painful too. At this, his girlfriend screams (an understandable reaction given the circumstances) before getting a knife shoved into the top of her skull. She dies as a result and a monster hand drags her bloody corpse down into the basement. Start credits. 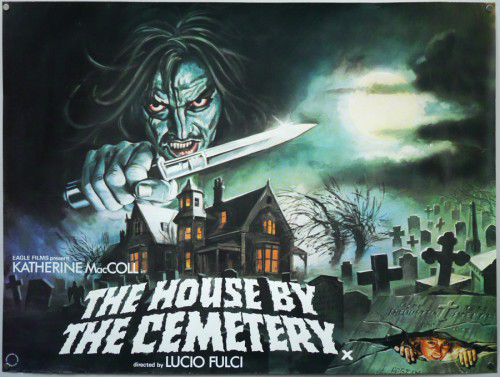 After that killer teaser, we’re treated this kid named Bob who’s busy psychically talking to a little girl who lives in a photograph of a creepy old house that looks and awful lot like the house by the cemetery we saw at the beginning of the movie. Bob tells his mother that they shouldn’t go to the house by the cemetery. His parents, Norman and Lucy Boyle (Catriona MacColl), are moving to the small New England town of New Whitby so Norman can continue the research of his late collegue, Dr. Peterson. You see, Dr. Peterson murdered his mistress and hung himself off a balcony in the local library, but that’s neither here nor there.

Anyway, they decide to move into the house Dr. Peterson’s was staying in a short while before the murder suicide, a house that resides by a cemetery. I know this because Mrs. Gittleson, the local realtor who’s renting the place to the Boyles, cusses “Damn tombstones” as she runs them over while leaving the property. The house by the cemetery has a few oddities. For instance, there’s an actual tombstone stuck in the middle of the living room floor. If you’re up late, you can hear the sound of children crying. There’s also a locked cellar door that bangs as if there’s something on the other side trying to get out. 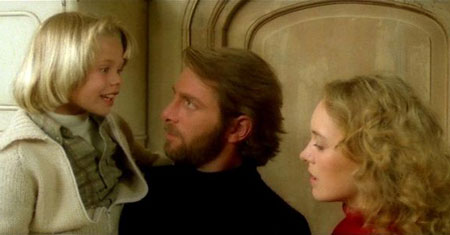 Norman tries to assure Lucy that’s there’s nothing strange in the basement. As he unlocks the door and ventures down, a giant bat attacks Lucy’s head before biting into Norman’s hand. The bat will not let go and Norman runs back upstairs into the kitchen, stabbing it with a pair of scissors. Blood spays everywhere. Some of it even gets on Bob’s face. The bat finally dies and Norman tosses the bloody remains onto the kitchen floor.

I guess the bat spooks the Boyles and they decide they want to move out. Mrs. Gittleson says she’ll stop by later to check on the house. When she shows up, the Boyle’s aren’t home. Mrs. Gittleson walks over the tombstone in the living room, only for the tombstone to crack open and catch her foot. It’s around this time that the creepy hands from the beginning of the movie come into play again. One hand grabs a fire poker and starts plunging it into Mrs. Gittleson. She bleeds out in agony as we hear monstrous groans of delight in the background. The hands drag the body down into the basement.

Norman Boyle discovers that Dr. Peterson was doing research on a turn of the century surgeon named Dr. Freudstein who was kicked out of the medical profession for illegal experiments. Norman finds an old tape recording by Dr. Peterson where Peterson rants about “blood” and “hearing Freudstein’s voice” and “No! Not the children!” Norman then promptly burns the tape in an elevated fire stove in the middle of the library.

Lucy is out shopping while Ann, the babysitter, is looking after Bob. She hears the sound of a child crying down in the basement. Ann goes down to investigate, but panics when the cellar door slams shut behind her. And panic she should because the next thing we see is butcher knife slicing and slicing and slicing through her neck, blood gushing everywhere. When Bob goes down into the basement to find out what happened to his babysitter, Ann’s head starts tumbling down the cellar stairs. Bob screams like the little coward that he is and runs back into the kitchen. Seriously? Man up, Bob!

His mom goes down to investigate, but there’s no sign of Ann’s head. Lucy figures Bob must have imagined the whole thing and that Ann is just visiting her parents. Undaunted, Bob decides to go look down in the basement one more time for Ann’s head. The door slams behind him and he can’t get out. Bob screams that someone is coming up the stairs after him. Norman comes to rescue, breaking the door down. Norman exclaims that Dr. Freudstein has been living in their basement the whole time and that he’s been murdering people to renew his cells. That’s how Freudstein’s been staying alive for so long.

Dr. Freudstein is rather unsightly. He has one of those dried apple faces. He doesn’t talk. He just grunts and growls. Norman decides to be a hero and attacks Dr. Freudstein with a knife. All kinds of maggots and crap spill out, but Dr. Freudstein continues to move about undaunted. He tears Normans Adam’s apple out as Lucy and Bob look on with horror. Hmmmmm. Maybe they should have left the house while they had the chance.

Ten Things I learned from watching The House by the Cemetery. 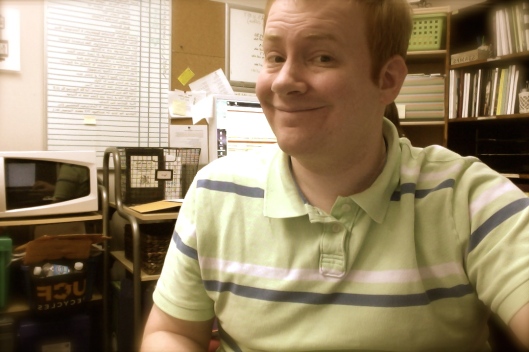