The Curator of Schlock #211 by Jeff Shuster

Live in the now! That’s this year’s motto here at The Museum of Schlock. The Disappointments Room made me realize that schlock isn’t something that exists in the past, but in the present! I think I will spend the rest of this year covering movies from this decade, the tens…or the teens…what the hell is the name of this decade anyway? Guess nobody attempted to name this one. That’s two for two so far. Not a good start for this century. Soon we’ll be in the 20s. Hopefully, it will be like the Roaring 20s. I’ll be able to quit this schlock curating business and go into bootlegging bathtub gin. A man needs dreams.

This week’s movie is 2015’s The Lazarus Effect from director David Gelb. This movie has an all-star cast. You’ve got Mark Duplass, the star of all those mumblecore movies. You’ve got Donald Glover from Community, Evan Peters from American Horror Story, and Sarah Bolger from The Tudors. It also stars Olivia Wilde from TRON Legacy.

I blacked out there. What was I reviewing? Oh yeah. The Lazarus Effect is about a bunch of scientists working in an underground lab on some serum that can bring the dead back to life. Yay, science!

Just kidding. This is a terrible idea! When does this ever go well? First they try it on a dead dog. The dog comes back to life and even his cataracts are cured. The dog seems okay at first. He doesn’t want to play catch. He doesn’t want to eat. He does like to bare his teeth and growl at the scientists. Bit of advice: don’t blow smoke from your electronic cigarette in a reanimated dog’s face even if he’s locked in a cage. He may break out.

So a major corporation finds out that the scientists figured out the secret to bringing the dead back to life. They buy out the company that was funding their research, confiscate all of their research, and get the university to fire the lot of them. It seems the dean didn’t like how they were resurrecting dead dogs. The team still has some of the serum left so they decide to head back down to the underground lab in the middle of the night. Dr. McConnell (Olivia Wilde) gets electrocuted to death. Dr. Walton (Mark Duplass) brings her back to life with the serum. 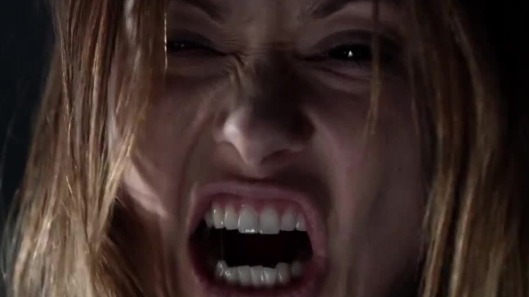 Dr. McConnell seems back to old her old self…except she keeps going on about how she was stuck hell and kept repeating the worst moment of her life over and over again. Oh, and it appears she has psychic powers and can now control 100% of her brain. She kills the rest of her team with her mind. And then she repeats the resurrection experiment on them.

I guess that’s kind of an ending.

The Curator of Schlock #113 by Jeff Shuster

Star Wars: The Ewok Adventure: The Caravan of Courage 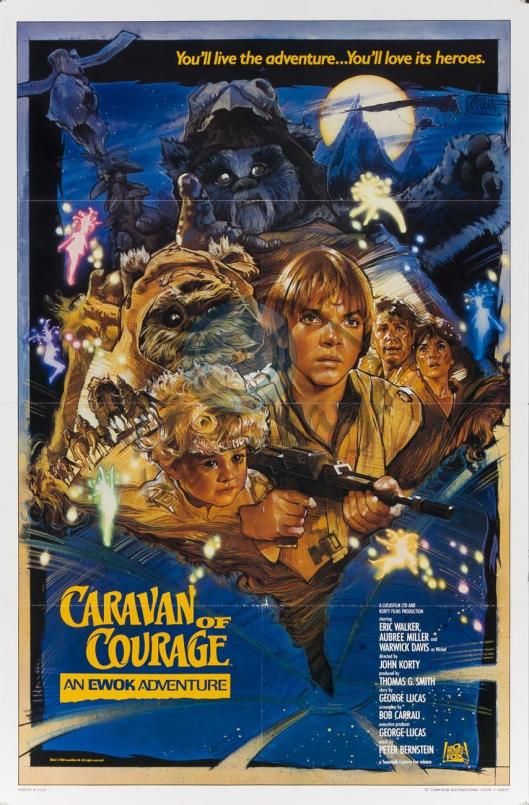 Hey, I bet you guys didn’t know that I was once a huge Star Wars fan. I bought the toys whenever I could afford them, could hum every note of the score, and had the dialogue from Episode IV: A New Hope memorized word for word. But then something happened…I TURNED SIX YEARS-OLD! Yeah, Return of the Jedi came and went out of the theaters and I moved on to other movies like Disney’s TRON. You know, that series we’re not getting a finale to!

Why should Disney make TRON 3 when they can just release a new Star Wars movie each year? That’ll will keep the nerds happy. Maybe they’ll get around to TRON 3 when Olivia Wilde turns 80. I’m not bitter or anything.

Of course, people tend to forget that George Lucas put out another Star Wars movie back in 1984, Star Wars: The Ewok Adventure: The Caravan of Courage. This was a made-for-TV affair, but my interest was still piqued.

Except that whole Ewok part in that they were my least favorite part of Return of the Jedi because they were cuddly teddy bears. Corporations kept pushing cute things on me when I was child: Rainbow Brite, Herself the Elf, Strawberry Shortcake, My Little Pony, Cabbage Patch Kids, and, of course, Care Bears. I liked monsters! Like the Rancor Monster that Luke Skywalker mercilessly butchered in Return of the Jedi. And then I got subjected to alien teddy bears! I’m not bitter or anything. 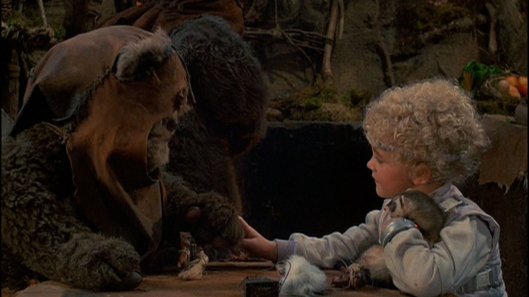 Anyway, Star Wars: The Ewok Adventure: The Caravan of Courage is about a human family that crashes their star cruiser on the planet of Endor. The mom and dad get kidnapped by a giant ogre. Cut to some Ewoks including Wicket, the one Warwick Davis played in Return of the Jedi. At least, I assume this is the same Wicket from Return of the Jedi. The movie doesn’t reference Return of the Jedi at all. I assume this move takes place after Jedi since the Ewoks don’t want burn the little girl they find alive. Her name is Cindel and she’s played by Aubree Miller. She has an older brother named Mace (Eric Walker) who starts shooting at the Ewoks with his blaster. He figures the Ewoks must have kidnapped them, and Ewoks don’t speak any English further complicating the situation.

At least we in the audience know what’s going on because Burl Ives narrates the whole thing, explaining the intricacies of Ewok society (just like he did for Reindeer society in Rudoplph the Red-nosed Reindeer).  For instance, there’s a special tree that provides a special sap that the Ewoks use to cure all of their ills. Oh, and before going on a quest, the village mystic will bestow gifts on the adventurers that are the totems of ancient Ewok warriors. And wouldn’t you know, the tribe decides to send a band of Ewok warriors to help the kids save their parents and kill the giant troll. They also run into some fairies and fight a giant spider at some point. The whole affair is like a prototype Willow, but without Val Kilmer. I’m not bitter or anything.

Five Things I Learned from Star Wars: The Ewok Adventure: The Caravan of Courage

Carrie, Evil Dead 2, House of 1000 COrpses, Satan, The Creature from the Black Lagoon, The Devil's Rejects, The Exorcism of Emily Rose, The Mouth of Madness, The Omen, Tron, Weeki Wachee

Episode 177 of The Drunken Odyssey, your favorite podcast about creative writing and literature is available on iTunes, or right click here to download.

This week is a live show for Horror Movie Poetry Night 2, starring The Drunken Odyssey All Stars, brought to you several days early for your Halloweening pleasure.

On this occasion, The Drunken Odyssey All-Stars included:

Special thanks to Writer’s Atelier for granting us a venue! 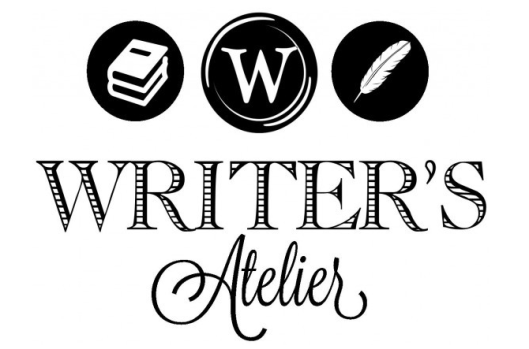 If you live in Orlando, check out WA’s website here for information about its workshops and events.

Episode 177 of The Drunken Odyssey, your favorite podcast about creative writing and literature is available on iTunes, or right click here to download.