The Curator of Schlock #3 by Jeffrey Shuster

On Deadly Ground: Below the Belt

You can tell Warner Bros. really cared about On Deadly Ground. Not many studios preserve the Pan & Scam jobs–I mean Pan and Scan jobs–they did on movies back in the days of tube TVs. It’s especially prescient for On Deadly Ground which was shot in the scope aspect ratio. Frankly, I think all of those wide angled shots of the glorious Alaskan wilderness would only serve as a distraction from the intricate plot and nuanced performances. On to the review.

1994’s On Deadly Ground was directed by Steven Seagal and starred Steven Seagal (I wonder if he was too pinched for time to score the movie). Anyway, Steven Seagal plays Forrest Taft, an expert at putting out fires at oilrigs and refineries. We’re not sure if we like him at first because he works for an evil oil company, but when some of the evil oil workers are picking on one of the local Inuit, Taft unleashes a world of pain on these flannel wearing losers. Taft’s favorite method of attack is groin kicking and groin grabbing. Taft even manages to get the head bully to play a game of patty cake before breaking the bully’s nose and giving a speech on manhood or something to that effect.

Michael Caine plays Michael Jennings, the evil executive of Aegis Oil. We know he’s evil because he sends his thugs around to intimidate the local natives, pumps toxic sludge back into the wells once he’s sucked all the oil out, orders hit jobs on potential whistleblowers, and uses the pejorative “prick” every chance he gets. When Taft learns that Aegis Oil approved faulty equipment, Jennings decides it’s time Taft had a little accident. Jennings has another oil rig set on fire and when Taft goes to put it out there’s this huge explosion, but he is rescued by an Inuit Tribe who heal his wounds. Taft goes on a vision quest where he wrestles a bear and decides that it’s time to take out Aegis Oil. He’ll do this by blowing up the main oil refinery and killing Jennings’ henchmen in a variety of creative ways. 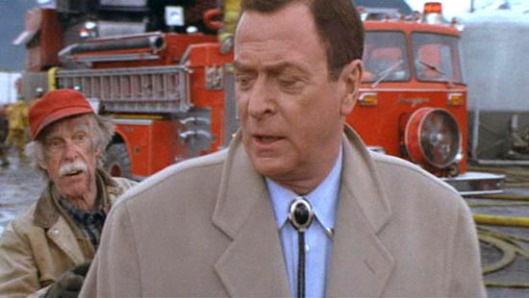 One of these henchmen is played by R. Lee Ermey, who explains succinctly who Forrest Taft is. Ermey says, “He’s the kind of guy who’d drink a gallon of gasoline so he can piss in your campfire. You could drop this guy off at the Arctic Circle wearing a pair of bikini underwear, without his toothbrush and tomorrow afternoon he’s gonna show up at your poolside with a million-dollar smile and a fistful of pesos. “ Who knew R. Lee Ermey was a romantic?

Ten Things I Learned From On Deadly Ground

3 thoughts on “The Curator of Schlock #3: On Deadly Ground”