Beyond the Door, The Curator of Schlock

The Curator of Schlock #9 by Jeffrey Shuster

Beyond the Door: The Child Must Be Born! 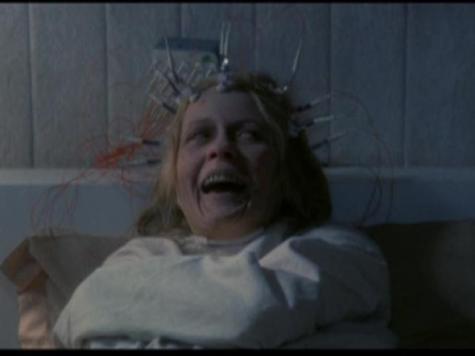 This month, I’m The Curator of Shock, serving you up some super scary movies. I hope you’re ready! First up is 1974’s Beyond the Door, a very freaky movie about demonic possession and demonic pregnancy. It’s The Exorcist and Rosemary’s Baby rolled into one! It starts off promising enough. We see a strapped down nekkid chick surrounded by rows and rows of candles. Sexy stuff until a bearded man’s face morphs over hers. Ewwwww! Satanic ceremonies aren’t all they’re cracked up to be folks.

Anyway, the movie takes place in San Francisco and centers around the Barrett family and their dealings with demonic possession. Robert Barrett is a hot music producer. He spends his workdays chewing out his R&B singers:

“What’s the matter with you guys? Sounds like a jerk off session in the bathroom. If you could play your instruments as well as you play with your tools, you might sound a bit better. “

Jessica Barrett (Juliet Mills) is his dutiful housewife and they have two beautiful children together if by beautiful you mean two awful brats, a little girl who owns 12 paperback copies of Love Story and a little boy who drinks split pea soup cold from the can. Both of the little brats cuss like sailors.

Jessica is also pregnant which would normally be wonderful news if not for the fact that the fetus is developing at an alarming rate. It might have something to do with the fact that Jessica attended the aforementioned satanic ritual. She had been having an affair with a man named Dimitri (Richard Johnson) once upon a time, a man who worked for the Devil! I guess the Devil wasn’t too pleased with Jessica running out of the Satanic ceremony because he wanted to use her as his “vessel.” Of course, the Devil does this anyway so what does it matter. Anyway, the Devil causes Dimitri’s car to drive off a cliff, but says he’ll keep Dimitri alive a little while longer if he “rips the baby” out of Jessica. Okay. That’s straightforward enough. Except that it’s later revealed that Dimitri is some sort of ghost or is he a walking corpse or…NONE OF THIS MAKES ANY SENSE! 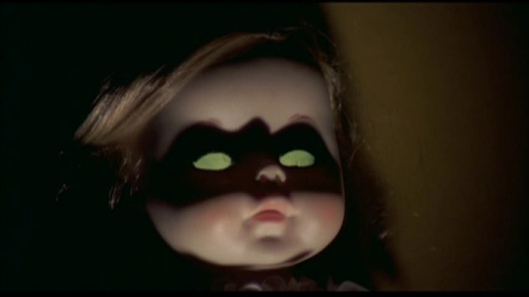 Meanwhile, back at Barrett household, Jessica is getting her Linda Blair with the speaking in various demonic voices and head twisting and puking up green vomit. Creepy dolls start coming to life, cakes splatter against ceilings, and rooms shake with demonic laughter. The Devil doesn’t mess around! Robert calls on the family doctor to check on Jessica’s condition, but she just screams at him, “Get out of here you piece of shit!” in a super scary man voice. The doctor just stands there with a “der” look on his face. Dimitri goes to Robert demanding that Jessica’s  child “must be born.” You see the Devil has made a deal with Dimitri. If Dimitri delivers the baby, the Devil will allow Dimitri’s soul to be reincarnated in the child’s body. When Dimitri goes to deliver the baby, the demonically possessed Jessica throws up in his face, laughing at him and telling him the deals off. The Devil has decided he wants to be reborn in the child. I think that’s in the last part of the Bible or something. Anywho, there’s a twisted ending that makes even less sense, but who ever said the Devil had to be logical. Frankly, I think the Devil just likes to mess with people because he’s a jerk!

Ten things I learned from Beyond the Door:

1 thought on “The Curator of Schlock #9: Beyond the Door (The Child Must Be Born!)”