The Curator of Schlock #176 by Jeff Shuster

Was it too much for Paul W.S. Anderson to cast Donnie Yen in a Resident Evil movie, have him get zombified, so we could have a kung Fu zombie fight scene with Milla Jovovich? Was that too much to ask? We’re four movies in and I have yet to see that scene! You don’t even need to have Donnie Yen play a character. Just have him play himself and then he gets zombified. And don’t have him do one kung Fu scene for like two minutes and then have him sit around for the rest of the movie like a certain Star Wars movie that I won’t mention.

Okay. Enough with my nitpicking. I’d say the first eighteen minutes of Resident Evil: Afterlife are just about the most awesome thing I’ve seen in a long time. Resident Evil: Extinction ended with Alice warning the evil chairman Albert Wesker that she was coming for him and the rest of the Umbrella Corporation. Resident Evil: Afterlife begins with Alice (Milla Jovovich) infiltrating Umbrella’s massive underground facility in Tokyo, Japan. She’s using ninja stars and a samurai sword, lopping the heads off of Umbrella guards left and right. 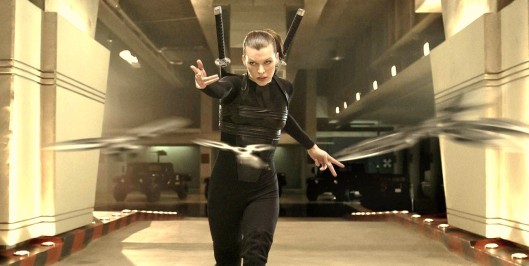 She even uses her psionic powers to waste even more guards. And then she gets three bullets in her back. No more Alice. Until three more Alices show up sporting machine guns. Milla Jovovich times three?

That’s right. I forgot Alice had freed hundreds of clones of herself at the end of Resident Evil: Extinction. And they’re all here, killing tons Umbrella officers! This is awesome! The evil Chairman Albert Wesker (Shawn Roberts) makes a quick getaway with his tiltrotor plane, smirking as he triggers a bomb from his cell phone that destroys Umbrella headquarters, killing all of the Alice clones and leaving a rather large crater in the middle of Tokyo. I really hate this guy!

Unbeknownst to him, the real Alice was hiding inside the plane. She sneaks up on Wesker, gun in hand, but he’s too fast for her. Wesker sticks a needle in her neck, releasing an antivirus that kill the T-cells in her bloodstream, removing her powers and turning her into a normal human being again. Wesker makes some speech about the Umbrella Corporation reclaiming their property and how he’s going to kill Alice. Maybe he should have focused his attention on piloting the plane, which is about to crash!

Alice survives and heads over to Alaska where the survivors in Claire Redfield’s convoy were supposed to be holding up. She searches Alaska for months, finding no sign of them or the town they were supposed to go to, Arcadia. Eventually, she finds Claire Redfield (Ali Larter), but she’s not herself. Claire acts like a wild animal, attacking Alice with everything she’s got. Alice knocks her out and removes a strange, robotic red beetle from Claire’s chest. Claire comes to, saner, but has amnesia, obviously. Claire doesn’t remember her own name.

They fly a plane to Los Angeles, where they run into a ragtag group of survivors like former basketball star, Luther West (Boris Kodjoe), and former Hollywood producer, Bennett Sinclair (Kim Coates). They tell Alice they’ve been receiving broadcasts from a huge ship named the Arcadia, which offers safe haven to survivors. Alice figures the rest of Claire’s convoy is on that ship.

They just have get through the zombie hoards to get to it. And let me tell you, the zombies are worse this time around. Their faces open up like Venus flytraps. Plus, there’s this giant super zombie with a burlap sack nailed to his head walking around, wielding a huge axe he made from a streetlight.

Fortunately, Chris Redfield (Wentworth Miller), brother of Claire Redfield, joins up with them. He knows how they can get to the ship. But what horrors await them onboard? I’m not going to tell you. I’m really digging this series.