The Curator of Schlock #196 by Jeff Shuster

Why don’t more movies put “terror” in the title?

Hi all. I don’t typically cuss on this blog. We try to keep things clean down here at the Museum of Schlock. But it looks like Disney decided to give me the proverbial kick to the groin with their most recent reveal. What the hell is this? 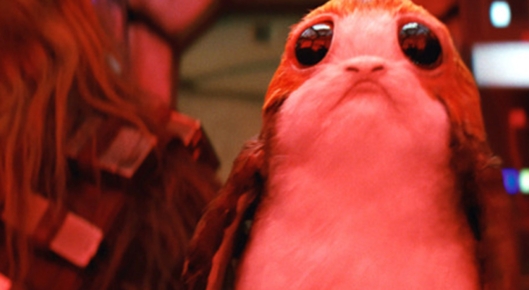 I repeat. What the hell is this? Why is there a space gerbil in the next Star wars movie? Whose bright idea was this? I hate gerbils! And now I’m going to see every child under six years-old running around with stuffed versions of these things, their dead eyes staring right back at me. Disney is calling them Porgs.

I have to get off this topic. I think I was doing some ill-advised science month here at the Museum of Schlock for the month of September.

It was the Museum of Schlock’s Relativity Series, a series of movies celebrating all things science or things of science that like to kill people. This week’s entry is 1966’s Island of Terror from director Terence Fisher.

I know, I did a Terence Fisher movie a few weeks back, and I’ll probably do another one before the end of the year because he’s awesome. This one stars Peter Cushing who is also awesome. Except for that performance he gave in last year’s Rogue One. Peter, you totally phoned in that performance.

The movie starts out pleasant enough. There’s something about those Technicolor movies of the 50s and 60s that I find comforting. Maybe it’s their rich use of color. I don’t know.

What’s the plot? Some scientists on Petrie’s Island off the east coast of Ireland are conducting experiments. In the hopes of curing cancer, they bring forth creatures from the silicon atom, creatures that will be named silicates. These creatures eat human bones. Yes, the silicates eat human bones as well as the bones of other mammals.

They slide across the ground like slugs until they get close enough to wrap their tongue around your leg or your arm. I guess they suck the bones out through your skin, leaving a mushy skin sack of blood and organs. That’s a bad way to go.

You do have one defense against the silicates. The emit a creepy sound whenever they’re in the vicinity, the way crickets would sound if the came from the 8th dimension. The island doctor decides that boneless bodies are above his pay grade so he contacts Dr. Brian Stanley (Peter Cushing) and Dr. David West (Edward Judd) for their assistance. Dr. West’s girlfriend, Toni Merrill (Carole Gray) comes along for the ride. They discover the silicates, people get eaten, and solutions for stopping them may or may not be found. You know the drill.

I don’t typically plug Blu-rays, but there’s a nice edition of this title from Scream Factory if you’re so inclined.

1 thought on “The Curator of Schlock #196: Island of Terror”