The Curator of Schlock #251 by Jeff Shuster

All I want for Christmas is poo.

I’m still reeling from last week’s column on Raw, a French/Belgium production about the trials and tribulations of two sisters who happen to be cannibals. Sometimes you gaze into the abyss and it gazes right back. Other times you gaze into the abyss and the abyss jumps down your throat, claws its way out of your stomach, and then feasts on your organs right in front of you as you bleed out. No more. The Museum of Schlock will only be featuring Hallmark Christmas movies for the foreseeable future.

Tonight’s movie is 2015’s A Christmas Melody, from director Mariah Carey. That’s right. This is singer Mariah Carey’s directorial debut, proving her not only the master of the stage, but of the screen as well. But she is not the star of this motion picture. Not that I’m saying Mariah Carey isn’t a star. Not that I’m saying anything negative about Mariah Carey in any way considering she’s worth 520 million and maybe she’ll read my humble blog and give me some money to pay the exterminator to deal with the cockroaches on the fifth floor.

A Christmas Melody begins with a saleswoman by the name of Kristen (Lacey Chabert) who recently got fired. A homeless man with a suspicious-looking long white beard asks her for money. She gives him the first five dollars she ever made which she framed for some inexplicable reason. You don’t frame money. You spend it. You can even spend it on pretty pictures to stick in that frame. Kristen is also a single mom. Her husband died when their daughter was only two years-old. Kristen had big dreams of becoming a fashion designer in Los Angeles, but now she and her daughter must move back to her hometown of Silver Falls to live with her Aunt Sarah (Kathy Najimy) who runs the town diner. 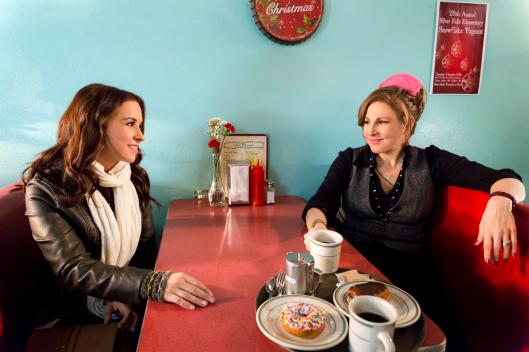 Out of despair, Kristen makes a Christmas wish to Santa Claus that she and her daughter Emily (Fina Strazza) will find happiness or something to that effect.

What else happens? I think I nodded off at some point. Must have been due to all those turkey leftovers, not this zany romp of a holiday movie. Mariah Carey plays Melissa, the head of the PTA and Kristen’s old high school rival.

Romance is also in the air. A music teacher by the name of Danny (Brennan Elliott) likes Kristen and by like, I mean he really likes her as in he’s had a crush on her since high school. Danny is super nice. By super nice, I mean really bland and really inoffensive, the sort of guy women in Hallmark World really go for. There’s also a school janitor with a suspiciously long white beard that looks just like the homeless guy Kristen ran into earlier. I’d say more, but I’m past my 500-word minimum and Weird Science is streaming on Prime right now. Why are they wearing bras on their heads?