Comics Are Trying to Break Your Heart #9 by Drew Barth

Turn It Off and Turn It On Again

Most monthly comics are built upon legacies and reboots of older characters. Essentially, most superhero comic fiction is officially-sanctioned fanfiction as the original authors are either no longer writing, no longer living, or both. As a result, many writers have sandboxes with certain rules, mythologies, and canons to play with. The amount of reboots and legacies is massive. Just look at the current reboots happening with DC’s general timeline, as well as the sheer volume of Robins who exist in Batman canons.

Look at how DC is reworking older characters, staying true to their original form while not allowing nostalgia to cloud a strong story.

The publisher has been taking characters from the Hanna-Barbera vault and working them either into one-shots. The most notable of all of these is Mark Russel and Mike Feehan’s take on our favorite pink cougar, Snagglepuss. And this is Snagglepuss as a closeted playwright during the Red Scare.

This comic can’t be considered a cheap novelty, however. There is this constant underpinning of basic humanity throughout the issues that makes it feel so refreshing when compared to some of the other stories that have come from this experiment. Snagglepuss is one of those moments where you can see that edifice of large-scale comic publishers start to pull away and just let some fantastic stories get told. 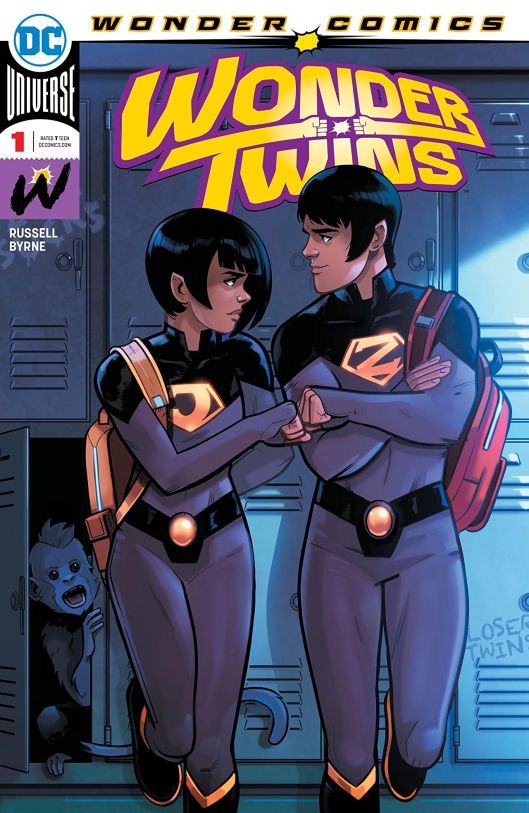 DC have also been working on a completely separate universe that recaptures the feeling of the old Super Friends cartoon from the seventies. The Wonder Twins is everything a reader can expect from a rebooted Super Friends-esque universe. The Hall of Justice stands, although its super computer is rendered useless by cellphones, and the trinity of Batman, Superman, and Wonder Woman walk the halls waiting to hear that world-ending alert that brings them into action. But Jayna and Zan are the focus here: two transplanted aliens outcast from their home planet who can turn into, well, not much when they tap their fists together. They’re also transplanted into a high school on a new planet. As it stands right now, it’s a fun twist on characters who have been a cultural punchline for forty years. They’re not these stiff weirdos that talk as if they don’t have the animation budget for them to say anything interesting—as a duo they’re well-developed characters that seem like they’ll have more to do as the story progresses. As of now only the first issue is out, but it looks like it’s going to be a fun six-issue mini-series. 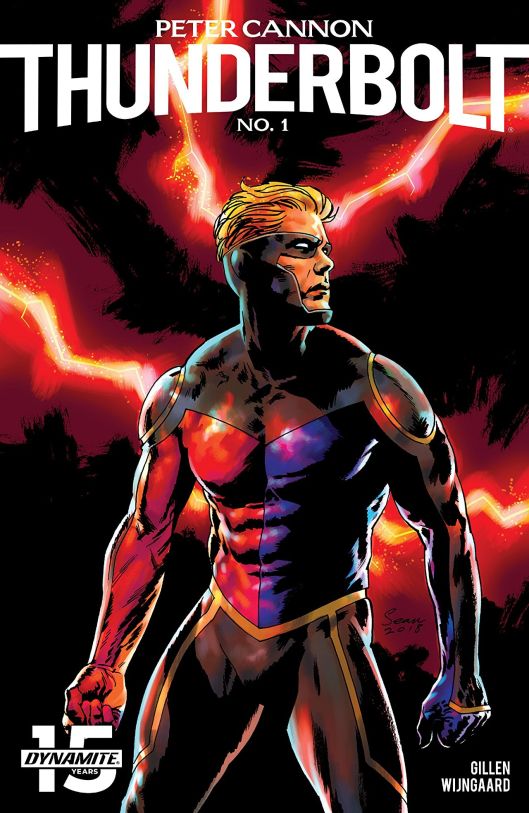 From there, we also have another first issue in the form of Peter Cannon: Thunderbolt. This is one of those odd characters who DC picked up in the 80s when they brought Charlatan Comics characters into their main universe. But Peter Cannon as a character is known more for who he was the basis for: Ozymandias in Watchmen.

However, since the death of his creator, Pete Morisi, in 2013, Peter Cannon has been owned by the late creator’s estate. As such, we now have a rebooted series from Dynamite Comics, Kieron Gillen and Caspar Wijngaard that looks to establish the character as something more than just a blueprint for others. They even address the issue of the “white savior” that Cannon was portrayed as for years due to being the last recipient of ancient scrolls from a Himalayan monastery after his parents died. It smacks of Iron Fist, but Gillen and Wijngaard create a character who feels generally remorseful at having to play this part.

It’s as close to a perfect first issue since Gillen’s last first issue in DIE #1. It’s for completely different reasons, though. This is Gillen bringing in his Watchmen love with utilizing the idea of thirty five minutes as a signal for what’s coming as well as Ozymandias’ plan for uniting the world through a fake alien invasion. Couple that with the two nine-panel grids that show up and you can see the influences right on the sleeve. That and the dash of Warren Ellis with a line like “HELLO ALIEN FRIENDS! DO YOU LIKE BULLET VIOLENCE?” to just tie the bow on top.

Of course, as always, there’s more characters and reboots out there. Kamala Khan, Jamie Reyes, Kyle Rayner, Robbie Reyes, et cetera, but they always have the one thing in common that matters to comic fiction, and that is they’re creating something new with their stories. When they’re done well, they’re iconic—they are the status quo for a series and the public face for decades. When not, we try to forget about them and move on to other things. Reboots and legacies fail, but with the series coming out just in the past year, there will never be a shortage of new takes on old ideas that feel refreshing.

Get excited. Comics are happening.