The Curator of Schlock #277 by Jeff Shuster

We’re on week two of Poliziottesca Month. I have it on good authority from a friend that the correct pronunciation of poliziottesca sounds like police tes tickles. In future conversations with strangers, I’ll be sure to I’ll be sure to profess my love of poliziottesca with the correct pronunciation. Today, I’ve decided to revisit director Fernando Di Leo, the man behind Kidnap Syndicate. We’ll see if he can scar me this time around. 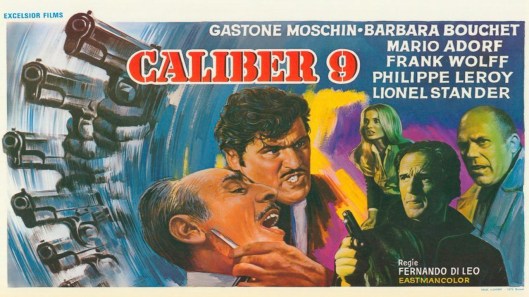 1972’s Caliber 9 is a movie about violent men doing violent things to each other. The movie starts out with a secret exchange of packages. One of these packages has $300,000 dollars in it. The other package has drugs or some other contraband. Or maybe there wasn’t another package. I remember a flock of pigeons flying in this one mobster’s face.

The mobsters pick up the package with the money in it only to find stacks of scrap paper. They’ve been duped!

The mobsters go after everyone involved with the tradeoff. They find this one guy getting a shave in a barber shop and start slicing his face with the razor. All the people they find insist they have no idea what happened to the money. The mobsters tie up the suspected thieves in a cave, set some sticks of dynamite around them, light the fuse and, well, that’s the end of the thieves. Don’t rob the mafia. The mafia will torture you and kill you.

One member of the suspected thieves ring was arrested and sent to prison not long after the money went missing. His name is Ugo Piazza (Gastone Mosvhin) and he manages to get a pardon. Upon release from prison, the mob gives him a lift into town and start asking him where he hid the money. I guess they figured since the suspected thieves they blew up with dynamite didn’t cough up the location in a last ditch effort to save their lives, maybe they weren’t the thieves after all. That leaves Ugo, but he insists he didn’t steal the $300,000.

The mob beats Ugo, steal his identification, and tell him that they’ve set up a meeting for Ugo to meet their boss, the Americano. I guess that means the head the head of this Mafia is American.

Ugo goes down to the police station to get a temporary ID so he can stay in a hotel. The police ask him where he hid the $300,000. Ugo says he didn’t steal the money. Ugo finds a seedy hotel to stay at and skips the meeting with the Americano. The mobsters show up at the hotel, trash Ugo’s hotel room, and tell him he’d better make it to the next meeting they set up with the Americano. 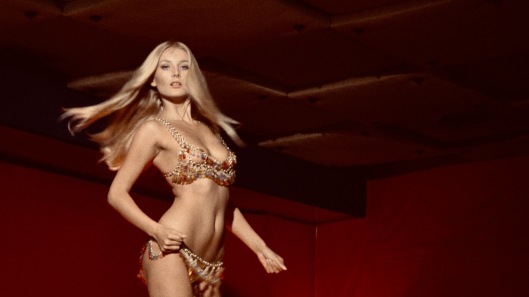 So: Ugo meets with the Americano. The Americano tells Ugo that he works for him now as a way to pay off the $300,000 he owes him. Ugo meets up with his old girlfriend, a go-go dancer named Nelly Bordon (Barbara Bouchet). She asks him where he hid the money. Ugo tells her he didn’t steal the money, but plans to find out who did so he can clear his name. There’s more violence, more death, plus a shocking reveal. I’ll give you a hint about the shocking twist: it involves who stole the money.

This one wasn’t bad. No scarring of my psyche.