The Curator of Schlock #311 by Jeff Shuster

It’s got robots in it.

We’re on Week 4 of Star Wars/Star Trek Wannabe Month here at the Museum of Schlock, and this cannot end fast enough. Is there anything in this world worse than bad science fiction? Is there anything worse than Star Trek: Picard? I wouldn’t know. It’s not like I watch that show. I used to dunk the heads of devotees of Captain Jean-Luc Picard in toilets back in high school. I can imagine them watching Star Trek: Picard right now seeing their once respected starship captain (and part-time archaeologist) reduced to a doddering old fool who everyone hates. 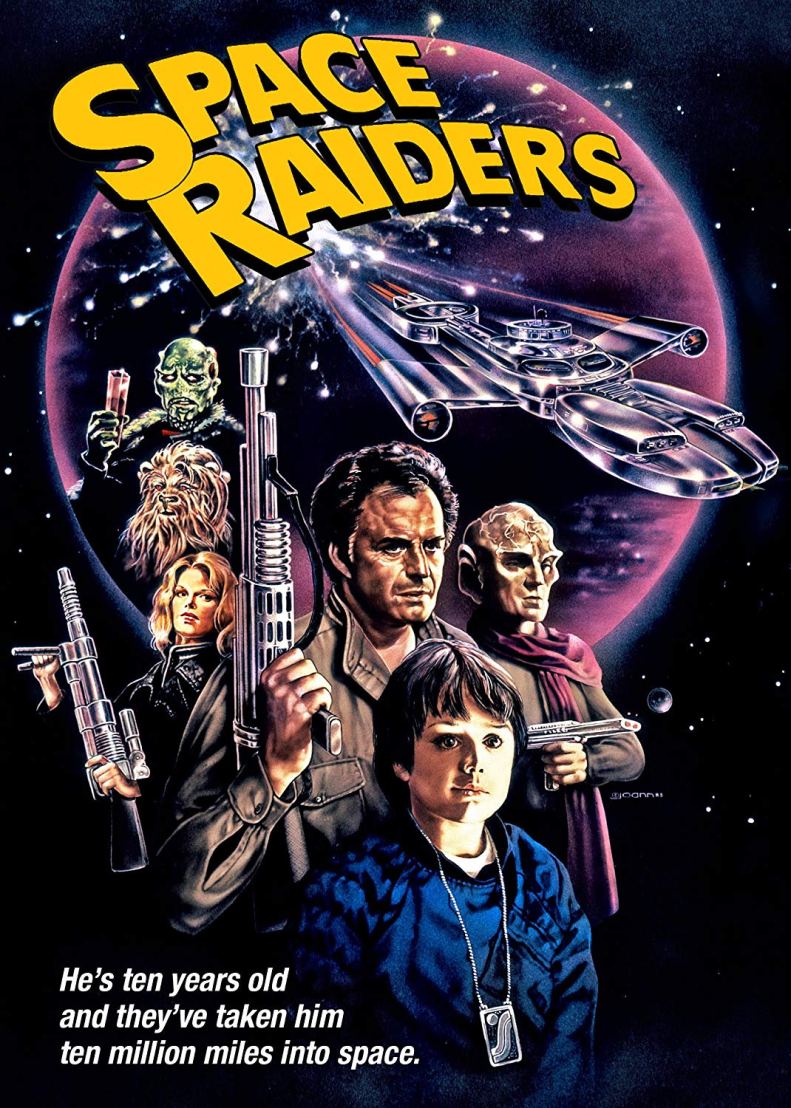 But we’re not here to talk about Star Trek. We’re here to talk about 1983’s Space Raiders from director Howard R. Cohen and producer Roger Corman. As we know, Roger Corman produced the science fiction classic Battle Beyond the Stars that featured an original score from James Horner and special effects by James Cameron. Roger Corman must have been really impressed by their work on that film because he reused the same score and the same model effects for this movie! Just pretend that Space Raiders takes place in the Battle Beyond the Stars cinematic universe and you’ll be fine.

The movie begins with a young boy named Peter (David Mendenhall) hunting for some lizard like creature at a spaceship port on a planet called Procyon III. Yes, this movie features a kid as the protagonist. Why do they do this? Everyone hates kids in science fiction properties. Just ask Jake Lloyd. People accused him of destroying Star Wars all throughout his childhood. I guess they’ll be leaving him alone now that they’ve moved on to picking apart the Disney Star Wars trilogy. Jake, you still have Jingle All the Way to your credit. They can’t take that away from you.

Let’s get back to Space Raiders. So some space pirates are having a shootout with some corporate goons who work for an evil corporation known imaginatively as The Company. They are lead by the fearless Captain Hawk (Vince Edwards), a former space military leader turned space pirate because he got disillusioned with the system or something. They steal some experimental spacecraft and, wouldn’t you know it, young Peter has stowed away on the vessel. Also, young Peter is the son of the woman who runs The Company. What a pickle.

Other members of Captain Hawk’s crew consist of sharpshooter Amanda (Patsy Pease) and alien psychic Flightplan (Thom Christopher). Captain Hawk decides he’s going to figure out a way to return young Peter back to his parents even if they are evil intergalactic corporatists with an army of robots at their disposal. Meanwhile, they stop at some space station run by a froggy alien named Zariatin (Ray Stewart) who doesn’t like young kids poking around his station. Zariatin is just a big meanie, and he’s ugly too!

Will Peter get returned to his home planet? Yes. Will every member of Captain Hawk’s crew get killed? Yes. Could all of this have been avoided if Peter had just gone home instead of stowing away on the spacecraft? Yes. Did I enjoy the movie? Not really. Is it better than Battle Beyond the Stars? No way! Is Roger Corman a cheapskate? I’ll let you decide.