Comics Are Trying to Break Your Heart #60 by Drew Barth

Vault Comics continues to impress. I’ve previously written about them here.  Since last year, Vault has become a consistent figure on the weekly comic shelves. While their series are typically science fiction, fantasy, horror, or some combination of those three, this last month they debuted a series that delves more into magical slice-of-life with Finger Guns. Created by Justin Richard and Val Halvorson, Finger Guns has the makings of something great.

Issue one accomplishes what any reader wants from a first issue: characters (Wes and Sadie), a  hook (both characters have the ability to make people angry or calm by pointing their fingers at them), and some complications (both characters have parents who are either absent or unrelenting). As a first issue, Finger Guns is almost textbook in how it paints the world its characters live in. But where Richards and Halvorson excel in Finger Guns is in how they approach their story. From the outset, the focus for Sadie and Wes is not in their powers, it’s on the relationship between them and their parents. We see how Wes’ father is never there through a series of texts, and we can hear Sadie’s parents arguing long before we ever see them on the page. As readers, we get burial and deflection from Wes and Sadie respectively. And for the most part, there’s nothing either of them can do about their situations.

Well, mostly. The first issue of Finger Guns ends with Sadie’s hand behind her back, finger gun primed, to calm her parents down. But it’s stated a few pages earlier that this placation is only ever temporary, and Sadie says that with the heaviness of experience. 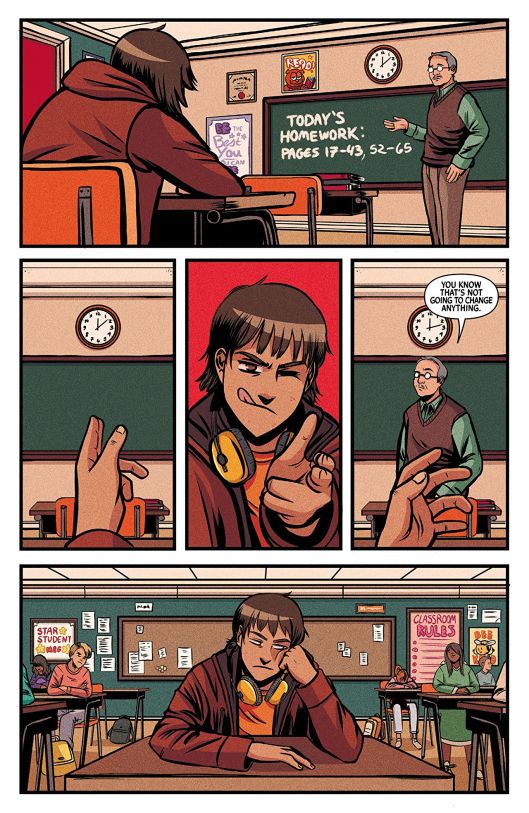 What propels Finger Guns outside of its full characters is the way they are shown to us. Val Halvorson is a master at his craft. From blocking out the moment where Wes realizes what his finger guns can do to the passing of time between Wes being at home, on the bus, and at the mall in one seamless transition to that final panel with Sadie’s hand behind her back shows this phenomenal awareness of how readers’ eyes follow forms and motion across the page. The cleanliness of the lines and the perfect palette set by colorist Rebecca Nalty establish a mood and tone to the story without using words. The visual splendor on display is stunning, even when it’s just two characters laying on a car. 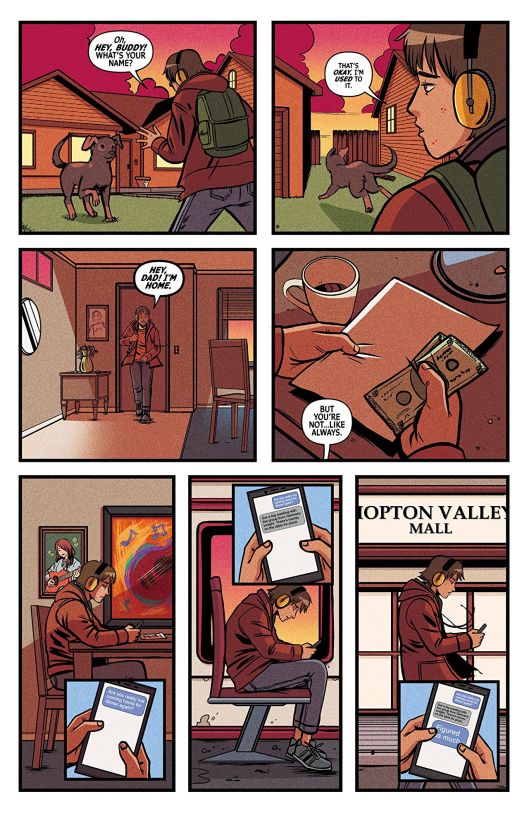 Get excited. Point them guns.