The Curator of Schlock #155 by Jeff Shuster

Two of a Kind

Another week, another movie to cover over here at The Museum of Schlock. Tonight, we’re covering a 1951 film noir entitled Two of a Kind from director Henry Levin. It stars Edmond O’Brian and Lisabeth Scott. I’ll give the movie credit for being more entertaining and more cohesive than last week’s mess of a PSA about small pox vaccinations. This one is about a gaggle of schemers, and we like gaggles of schemers her at The Museum of Schlock. 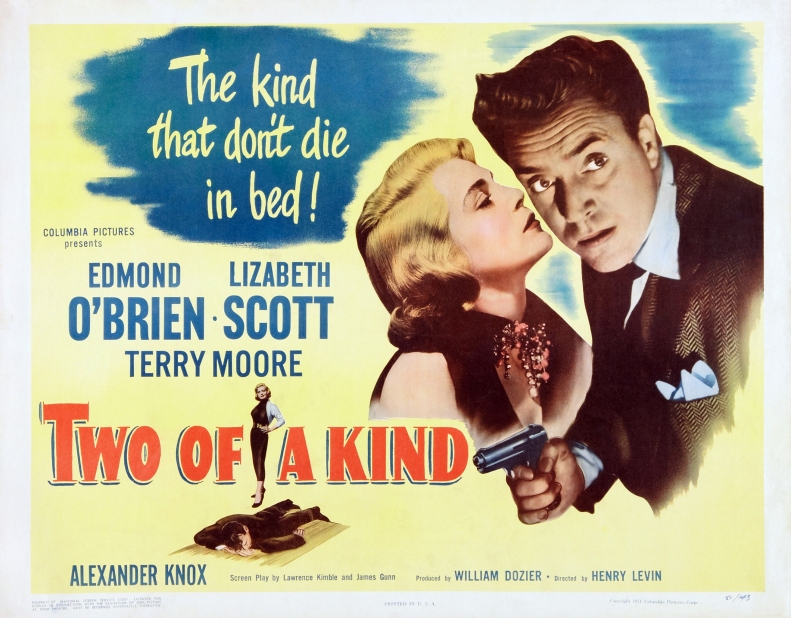 So there’s this woman named Brandy whose investigating this guy named Michael “Lefty” Farrell. She visits the orphanage where he grew up and the priest says he was a “difficult boy.” Lefty had run away from the orphanage to join Coney’s Colossal Carnival. Then he had moved on to dice and card hustling before joining the Navy where he was suspected of crooked gambling.

Brandy catches up with Lefty at a Bingo casino. Wait a minute? This was a thing back in the day?

Lefty sneaks Brandy a winning card, punches out the date she’s with before getting arrested by the cops.

Brandy pays his fine and the two of them drive away to a secluded spot to talk. She offers him a wad of hundreds that’s a mere fraction of what he’ll get if he does what she says. Hmmmmmm…Sounds good to me. Except for the fact he has to get the tip of his pinky removed from his left hand by smashing it in a car door. Ewwwwwww! She drops him off at an emergency room before speeding away.

You know, if I was making this movie, I’d never have Lefty meet Brandy again. The wad of bills would have been funny money. Lefty would never be able to hold down a job because of his severed pinky. Children would run away from him screaming, all because of his severed pinky tip. Lefty would end up bitter and alone, never knowing why some femme fatale persuaded him to sever his pinky tip.

Of course, that doesn’t happen. Brandy shows up again and tells him he has to stay three months at her beach house so the pinky can heal and look old. What’s the scheme? Brandy and her boss, Vincent Mailer (Alexander Knox) want Lefty to pose as the long lost son of a wealthy couple, the McIntyres. Vincent is the attorney for the McIntyres and was charged with searching every orphanage in the country for their missing son to no avail. Oh, and the long lost son was three when he went missing.  The only distinguishing characteristic was his missing pinky tip.

Vincent and Brandy have the idea that Lefty should try seducing the McIntyre’s niece, Kathy McIntyre (Terry Moore). Lefty breaks into the McIntyre’s to see Kathy. He trips the alarm, the police show up, but Kathy covers for him, sending the police away because she wants to reform Lefty. I guess she has a thing for bad boys. When Mr. and Mrs. McIntyre’s see him with Kathy, they start to suspect that he could be their long lost son. Will the scheme pay off for Lefty and his cohorts? Nah. Crime does not pay, people.