The Curator of Schlock #234

Here we are again. I had a request from my editor last week to compare Charles Bronson’s performance in the original Death Wish to Bruce Willis’s in the remake. My initial reaction was “Charles Bronson gave a performance in the original Death Wish?” Maybe I was being too harsh. He must have been doing something right to get us to follow that character through four sequels. For this week, we will judge both Death Wishes and determine which one is the winner. Then, I will finally put Death Wish behind me, never to mention it again (at least until Death Kiss comes out).

1.      Bronson vs. Willis
Charles Bronson and Bruce Willis are playing two different characters that just happen to be named Paul Kersey. One is a rich architect living in New York City.

The other is a rich doctor living in Chicago. One has a full head of hair and a boss mustache. The other is clean-shaven and bald. Both suffer the loss of their wives due to a home invasion. 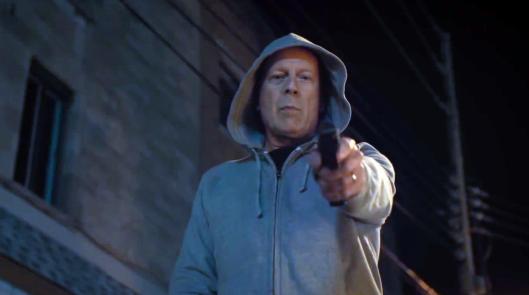 So in a way, they are the same character. But there is one key difference. After his family is attacked the original Death Wish, Paul Kersey is shown to be afraid of the city he calls home. He works up to becoming a vigilante, first by defending himself from a mugger with sock full of quarters. In the remake, it doesn’t take long for Paul Kersey to embrace vigilante mode. Even before this Kersey gets a gun, he challenges two punks that are harassing some girl on the street. Kersey gets the crap kicked out of him, but he didn’t look the other way when he saw she was in trouble. This is where Bronson has the edge. You do see the fear in his character in the beginning whereas Willis’s character acts like he as nothing left to lose. You don’t get the journey with Willis.

This is a tough one because we do get a decent score by Ludwig Göransson who also composed the soundtracks for Creed and Black Panther. I won’t pick on the remake’s score because it’s better than most Hollywood scores these days, but come on. Nothing will beat the original jazz score by Herbie Hancock. Bonus points for the inclusion of AC/DC’s “Back in Black” for the remake, but it’s still not enough to push it over the edge.

We don’t really get to know Paul Kersey’s daughter too well in the original film. After getting attacked, Carol (Kathleen Tolan) falls into a vegetative state before being checked into an asylum run by nuns. One could argue she’s one of the most depressing characters ever. In the remake, she’s an athlete and is studying Krav Maga. Jordan (Camilia Morrone) even manages to knife one of the home invaders before getting shot. Yeah, Jordan Kersey in the remake wins this one.

The original Death Wish was shot in that grainy 1974 film stock that adds to the grime of the original. The remake was shot digitally in HD. It’s a personal preference, but I prefer the former. Still, high definition does lend itself well to action movies such as this. But I’m stuck in the past.

There is nothing more terrifying than 1970s New York City. I know it’s popular to call Chicago the murder capital of the world, but I was in Chicago about two years ago to see a Lush concert at The Vic and the only people I encountered were hipsters. I will say the hotel I stayed at served hardboiled eggs at the free continental breakfast, but that was the only criminal activity I encountered while in Chicago.

Four out of five for the original Death Wish, but do check out the remake. It’s still better than Death Wish 5.