The Curator of Schlock #241 by Jeff Shuster

Welcome back to Batman Month here at The Museum of Schlock, a celebration of all things Batman. I’ve got a great idea for a Batman villain. His name is Mr. Murder. His main gimmick is that he murders people: little old grandmothers, schoolchildren, dog whisperers, personal trainers, you name it. And every time he would taunt Batman about how Batman doesn’t kill the bad guys by the Batman code: don’t kill the bad guy no matter how awful he is. And then Batman will cry as Mr. Murder gets sent to jail promising to break free and murder even more people. I’m going to turn it into a graphic narrative and get it adapted into the next big feature from Warner Bros. Ben Affleck will surely sign on. 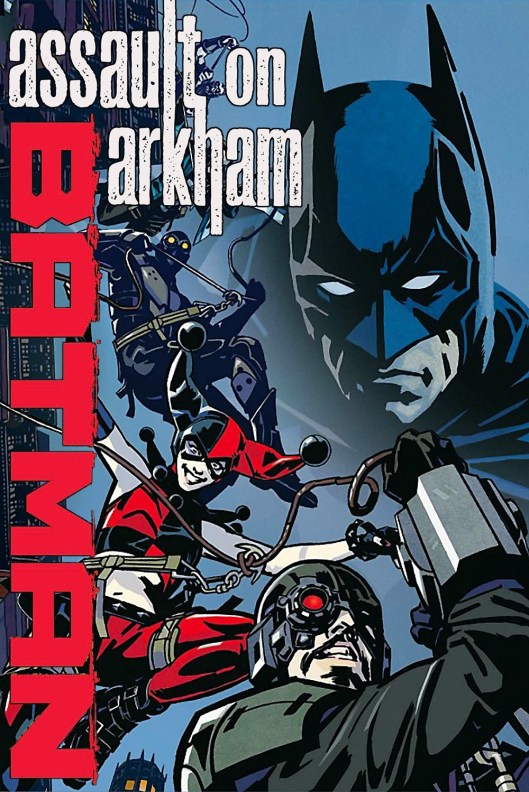 Tonight’s cartoon—I mean animated motion picture—is 2014’s Batman: Assault on Arkham from directors Jay Oliva and Ethan Spaulding. Don’t be expecting too much Batman in this movie. I know it may have Batman in the title, but he’s strictly a side character. This is okay, as there’s some cool stuff in this movie, namely Task Force X, also known as the Suicide Squad. It’s basically a team of incarcerated super villains who the US government employs for dangerous missions in exchange for reduced sentences. Amanda Waller (voiced by CCH Pounder) heads the secret government organization named ARGUS. The movie starts with her sending a black ops team to capture the Riddler at his hideout when Batman (voiced by Kevin Conroy) shows up, beats up the whole team, and rescues the Riddler. Waller gets annoyed and assembles the Suicide Squad. 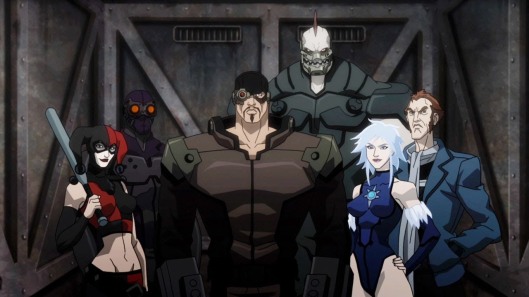 We’ve got Deadshot (voiced by Neal McDonough), an international assassin, but he’s the father of a little girl that he wants to get back to so he’s not all bad. There’s KGBeast, a Soviet of some sort who kills people, Black Spider, a vigilante who only kills criminals, Killer Frost, a sexy femme fatale who can freeze people to death with her hands, King Shark, a scary anthropomorphic shark man that likes to eat humans and bathe in their blood, Captain Boomerang, some Aussie guy who can throw any object just like a boomerang, and Harley Quinn, the Joker’s ex-girlfriend who’s a bit unbalanced herself.

Amanda Waller wants them to sneak into Arkham Asylum and find some intelligence files the Riddler stole from ARGUS. All members of the Suicide Squad have explosive nanobots embedded in the back of their necks or some such nonsense. In other words, their heads will explode if they try to make a run for it or disobey a direct order. She makes an example of KGBeast when he tries to leave and his head promptly explodes. We like exploding heads here at The Museum of Schlock (Scanners forever!), so this movie gets a passing grade. 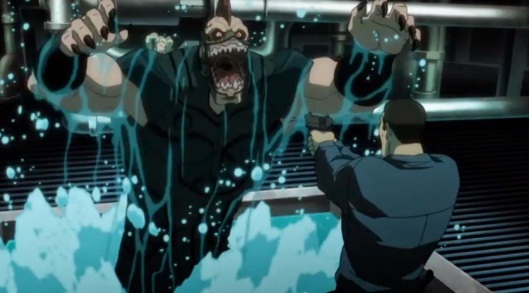 Meanwhile, Batman is trying to find the location of a dirty bomb the Joker plans to use on Gotham City which leads him to Arkham Asylum. Still, make no mistake, this is Deadshot’s movie. It’s odd having a villain as a protagonist in a Batman movie, but at least he’s not a violent psychopath like the inmates of Arkham Asylum and you’ll be rooting for him when he goes toe to toe with the Joker at the film’s climax. A solid effort from Warner Bros. animation.