The Curator of Schlock #323 by Jeff Shuster

The Deadliest Film Ever Made?

My car broke down on my way back to Orlando from the Florida Everglades. I guess leaving it parked in the middle of the woods and not driving it for a couple of months wasn’t the best idea. Famished, hungry, and lost, I came upon on old Antebellum mansion. I was greeted by a gaunt butler named Jervis who offered me a fine meal and a room for the night. He says the former master of the estate had a rule about always showing kindness to strangers. I did a toast to my charitable host and Jervis informed me that I could stay as long as I wish. The Wi-Fi is great here, but these old portraits of southern ladies and gentlemen creep me out. I feel like their eyes are following me. 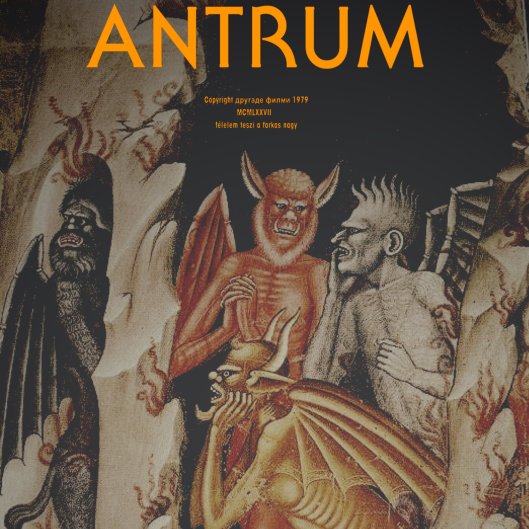 Tonight’s movie is 2018’s Antrum: The Deadliest Film Ever Made from directors David Amito and Michael Laicini. Why is it called the deadliest movie ever made? Because everyone who saw Antrum died a horrible death soon after watching it. The documentary passes out some fascinating tidbits about this Bulgarian production from 1979, how when it was screened at a theater in Budapest, the whole place caught fire and the audience was burned alive. Other stories involved a man getting stung by a poisonous fish one day after viewing Antrum and dying on the spot.

Another one involves a rare screening of Antrum in San Francisco that caused the audience to storm the exits only to find them locked. The crowd then begins viciously attacking each other due to the LSD laced popcorn they were given before the start of the movie. That concessions clerk is now serving time on multiple counts of manslaughter. What a sick degenerate! The documentary reveals that Antrum also featured weird audio cues and still shots of vile scenes cut into the movie so your subconscious would register the image. Around this point, I’m kind of glad that movie was lost to the ages, but then the documentary reveals that a print of Antrum in its entirety has been discovered and purchased at an estate auction in Connecticut. The movie will begin in ten-seconds. Yikes! I now get to watch this cursed movie!

Antrum centers on a boy named Nathan (Rowan Smith) and his older sister, Oralee (Nicole Tompkins). We begin with Nathan’s mother, Amber, putting his dog, Maxine, to sleep. That’s an odd name for a dog, but Oralee is an odd name for a human, so whatever. During a car ride, Nathan asks his mother if Maxine is in heaven like other dogs and she tells him, “No, Maxine isn’t in heaven because she was bad.” I would have taken a different approach to this question. I would have told Nathan, “It’s a stupid dog! Woof! Woof! A dog!”

We cut to Nathan and Oralee in a tent at night. They’ve gone camping. Oralee has an elaborate scheme that she got out of some kind of forbidden tome to redeem Maxine’s soul. They travel to the forest where the devil landed after God cast him out of heaven. It is there that they will find the antrum, the gateway to hell. Oralee and Nathan uncover some brambles that cover the place they’re supposed to start digging. Oralee draws a pentagram on the ground and puts the star and crescent, the menorah, a statue of Jesus Christ, a statue of Vishnu, and a blood red statue of Buddha smiling menacingly. I guess that’s covering all the bases. The two begin to chant, “One by one we pray to thee, protect us from all we see. From all we’ll hear and touch and smell. From all the unknown dark in hell.”

Weird stuff starts happening after they dig through the first layer. A apoplectic squirrel appears that Oralee insists is a demon. She tells Nathan to use a magic stick to drive it away. They come across a Japanese man undressing down to his boxers about to commit seppuku, but Nathan screams. The guy mutters in Japanese and walks away, presumedly to another part of the forest where he can get some privacy. Oralee and Nathan continue to dig. Nathan discovers a loaded handgun buried in the pit. Nathan keeps seeing black figures staring at them through the woods.

Before bed, Nathan comments on how Oralee’s feet stink and she orders him to brush his teeth because his breath is rank. Oralee tells him that the Cerberus will get him if he stinks too much. Nathan takes her warning to heart and brushes his teeth by the lake under the full moon. He sees what looks like a ferryman rowing a boat with a naked, deformed person in it. This movie is just plain freaky and I’m not liking it. Plus, I keep getting flash frames of devils, occult symbols, and photos from somebody’s sick torture porn fantasy. I haven’t even gotten to the part with the two Bulgarian rednecks and the fact that one of them is committing what I’ll describe as “animal husbandry” to a dead animal! This is a sick, sick movie, but movies don’t kill people.

Jervis is knocking on my door asking if I’d like a hot water bottle.