The Curator of Schlock #1 by Jeffrey Shuster

Why should you pop Umberto Lenzi’s Nightmare City into you’re DVD player? It’s called Nightmare City. What makes the city a nightmare city? Zombies. Lots and lots of zombies. 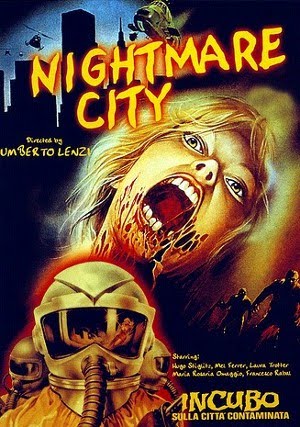 Apparently, somewhere in Europe there was a radioactive spill at a nuclear plant. The movie doesn’t specify if it’s a nuclear power plant or a plant that makes nukes.  Anyway, they send this scientist named Professor Otto Haggenbach over to find out what’s going on. When the good professor is scheduled to return, the local TV station sends ace reporter Dean Miller (played by Hugo Stiglitz) to interview him at the airport. A mysterious cargo plane lands and the military police are called in to yell at it with a megaphone. I could tell they were military police because their cars say POLICE on the side in big bold letters and they carry machine guns.

The door to the plane opens and lo and behold, it’s Professor Haggenbach. He looks a little frazzled, jet lagged. The Police Chief goes up greet him only to get stabbed in the chest with a pair of scissors by the good professor. The cargo bay door opens and a colony of zombies pours out. There must be about five hundred of them in there. And they’ve got axes, pipes, and other metal implements. As the hacking commences, some of the police try shooting at them with machine guns. The guns do no good and the next moment is awesome. The zombies start picking up the machine guns and using them against the humans. If zombies can use machine guns that pretty much does it for the human race.

I know what you’re thinking. Zombies can’t use machine guns. You’re probably among the same group of geeks who says robots in science fiction must always follow Asimov’s Three Laws. Let me tell you something, Italian zombies using machine guns is inspired. Not only do they use machine guns, they also wipe their mouths after feeding on people. Given time I’m sure they’d start using napkins. There’s one scene in Nightmare City where a bunch of them are clearly enjoying some Southern Comfort right from the bottle. And while these zombies attack men head on, they tend to tear off the blouse of every woman they run into. 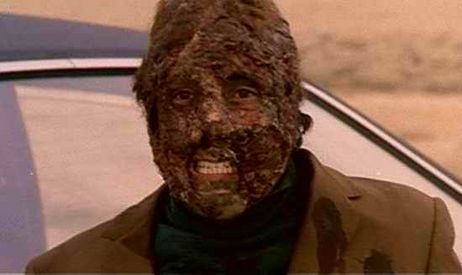 Typically, I’d start rooting for the zombies at this point if we weren’t presented with one of the most heroic reporters in zombie movie history. Dean Miller uses everything at his disposal. He actually sets a bunch of zombies ablaze with a television set. He beats a zombie priest to death with a golden candlestick. So kudos to Dean Miller. He may not be too easy on the eyes, but looks don’t count for much in a zombie apocalypse.

Dean Miller is a man of action. That’s more than I can say for the generals who spend most of the movie held up in a bunker somewhere saying things like “It looks like the attackers will hit here, here, and here.” Or “Oh, it looks like the attackers dismantled the south power station. It will take hours to get it running again.” Or “Let’s not dramatize the situation and leak any news that might cause public disorder.” Hmmmm. You know what I think would lead to public disorder? An army of machine-gun-wielding undead cannibals attacking everything in sight!

I don’t want to spoil the twist ending for you. 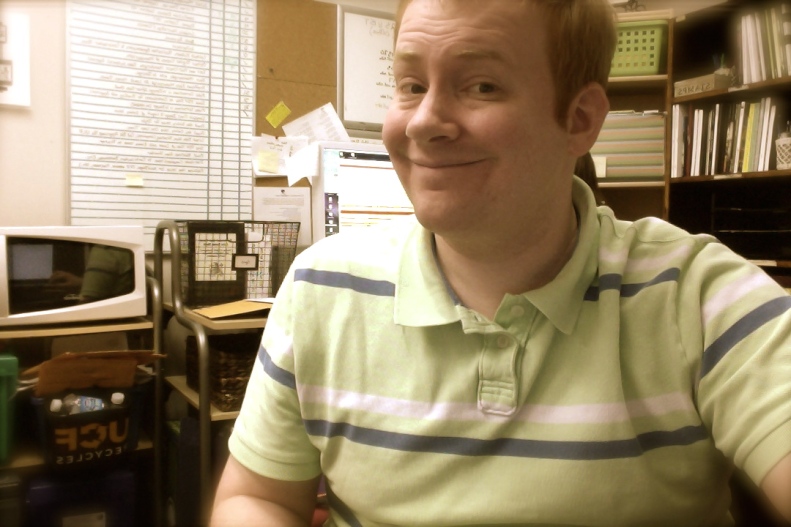 Jeffrey Shuster is an MFA candidate and instructor at the University of Central Florida.

3 thoughts on “The Curator of Schlock #1: Nightmare City”