The Curator of Schlock #224 by Jeff Shuster

Any of you out there ever watch the movie CQ from director Roman Coppola? The film is a love letter to all those groovy movies that came out of Europe during the 60s and 70s. It centers on a young editor who gets thrust into a director’s chair for a movie titled Codename: Dragonfly, a kind of Barbarella meets James Bond sort of deal. It’s currently steaming for free on Vudu. I was thinking about what happened to these weird escapist pictures we used to get from countries like Italy and England, all those spy movies and gothic horror pictures. Of course, we still get James Bond movies.

And then there’s the Resident Evil series.

The Resident Evil movies do not feel like Hollywood productions. Maybe it’s their English director, Paul W. S. Anderson, or the international cast of actors doing their best to play Americans surviving the zombie apocalypse. Also, I could have sworn I saw a credit roll for some German funding. The Resident Evil movies are R-rated action blockbusters, something that’s little seen in these days. Resident Evil is an exercise in excess, of balls-to-the-wall action and gore featuring Milla Jovovich as our ass-kicking heroine, Alice. Whether it’s zombies, evil agents of the Umbrella Corporation, or a vast array of biomonsters, Alice always makes it through on top, usually with a cliffhanger following right after.

But this is Resident Evil: The Final Chapter, the end of the line.

And admit that I had trepidation going into this one based on the lackluster customer reviews on Amazon.com. I’m pleased to announce that this one lets the series go out with a bang. Picking up a few years after the events of Resident Evil: Retribution, we find Alice driving through the zombie infested American wasteland. The end of the last movie had her teaming up with Albert Wesker to help prevent the end of the world, but we find out that it was a ruse and he betrayed her. The Umbrella Corporation had always intended to end the world and exterminate the human race with their zombies and other bioweapons. They figured with all the overpopulation, over-farming, and global warming, the world was going to end anyway so they might as well be the ones to do it. Members of the Umbrella Corporation simply hid in bunkers underground, avoiding the slaughter above and ready to reclaim the earth after every last human on the surface was dead.

All this information is given to Alice by the Red Queen, that creepy artificial intelligence that looks and talks just like a little English girl. The Red Queen reveals to Alice that the Umbrella Corporation created an anti-virus that can destroy every zombie and biomonster. The anti-virus is being kept in ruins of The Hive, the underground Umbrella compound from the first movie. It’s up to Alice and a group of rag tag survivors to infiltrate The Hive and release the anti-virus before Dr. Isaacs (Iain Glen) kills the lot of them.

That’s right. Dr. Isaacs is back even though Alice killed him at the end of the third movie. And it looks like he’s found religion if his collection of rosary beads and that Bible he keeps slapping around are an indication. Dr. Isaacs commands a couple armored tanks outfitted with machine guns and missile launchers. 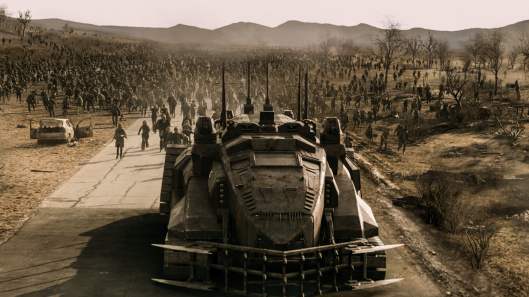 There’s also a hoard of a few hundred zombies trailing behind him. Inside The Hive isn’t much safer. The evil Albert Wesker is in control of its defenses and takes glee in tormenting Alice and company by releasing mutant dogs, activating tap doors, and dicing up her companions with giant fans all the while enjoying a Scotch on the rocks from the safety of a control room.

Will Alice save the day? You’ll have to watch it and see. At six movies, the Resident Evil series is a B-movie saga. There are many out there who deride movies based on video games. They say that the B-movie is the ceiling for them, but what’s wrong with that? 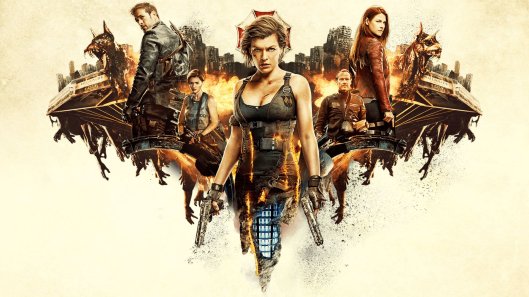 Sometimes a B-movie is what’s best in life.