The Curator of Schlock #357 by Jeff Shuster

Time for another month of devil movies.

So I’ve set up the match between Edwige, my traveling kangaroo companion, and a Quebecer nicknamed Lickity Spit. I’ve been promised safe passage into Canada if Edwige knocks this guy out and I’m putting my money on Edwige. Literally, I’ve placed what’s left of my savings on this match. Daddy needs a new pair of shoes.

It’s Satan Month for this blog and I’ll be covering four films featuring the Prince of Lies or the closest equivalent. Tonight’s movie is 1976’s J.D.’s Revenge from director Arthur Marks. It’s a movie about ghostly possession. There are no bona fide demons in this movie, but we do get a fire and brimstone preacher ranting about Satan. Close enough.

The movie is about a college football player named Isaac Hendrix (Glynn Turman). Life is going well. He’s studying pre-law, has a job as a taxi driver, and a supportive wife named Christella (Joan Pringle). The two of them go out for a night of revelry with their friends which has them turn up at a stage show featuring hypnosis with audience participation. The hypnotist makes the participants think it’s really hot so they start to strip. Then the hypnotist tells them it’s really cold so they start to cover up. During this hypnosis, Isaac sees horrible visions of death and mutilation. The hypnotist snaps the participants awake, but Isaac is now possessed by the malevolent spirit of J.D. Walker, a hustler murdered in New Orleans back in the 1940s.

J. D. Walker’s ghost is on a mission to find his sister’s real murderer, after his sister’s vengeful husband mistook J. D. for the murderer and killed him (J. D.). Did you get all that? I was pretty confused from the get-go, but maybe that was the director’s intent. Anyway, Isaac acts stranger and stranger. He starts buying old clothes, straightens his hair, and experiences blackouts when he takes on the persona of J.D. Walker, hardened criminal and womanizer. 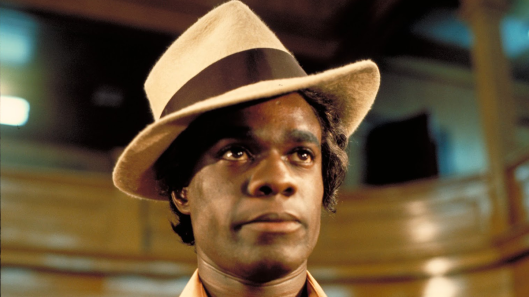 Seeking answers to what’s wrong with him, Isaac finds his way to a church run by the Reverend Elijah Bliss (Louis Gossett, Jr.), a prizefighter turned preacher. Reverend Bliss goes on about how we have to fight our inner demons and keep Satan from entering our house. Elijah’s brother, Theotis (Fred Pinkard), doesn’t like the looks of Isaac, but Elijah’s daughter, Roberta (Alice Jubert), is drawn to him. J.D.’s possession of Isaac takes greater and greater control of  him. He wreaks havoc all over town before a final confrontation with his killer. Will J.D.’s soul be put at peace and his killer brought to justice? You’ll just have to watch. This a creepy little horror movie with a great dual performance by Glynn Turman.