The Curator of Schlock #389 by Jeff Shuster

Liam Neeson on a train.

For those of you not in the know, the city of Orlando is home to what some would call a dangerous vigilante, a name whispered in fear by the criminal underground. His name is the Revenging Manta, a ninja clad in purple. He’s on the prowl for murderers and thieves, always at the ready to give them a taste of his steel. I thought the story was an urban legend until the Revenging Manta saved me from some goons in a dark alley. He wiped his bloody ninjato on the corpse of the hooligan that was about to beat me to death. The Revenging Manta then turned to me and said, “We need to talk. There’s a Waffle Housea couple blocks from here.”

Tonight’s movie is 2018’s The Commuter from director Jaume Collet-Serra. Liam Neeson plays Michael MacCauley, an insurance salesman that rides the same commuter train into New York City, day in and day out. He has a house, a lovely wife, and a son ready to graduate high school and head off to a very expensive university. I think he and his wife liquidated their savings and started a second mortgage during the last recession. I think Michael had to sell his gold fillings too. The point is the family is struggling for money and then Michael’s boss gives him the pink slip and a meager severance. 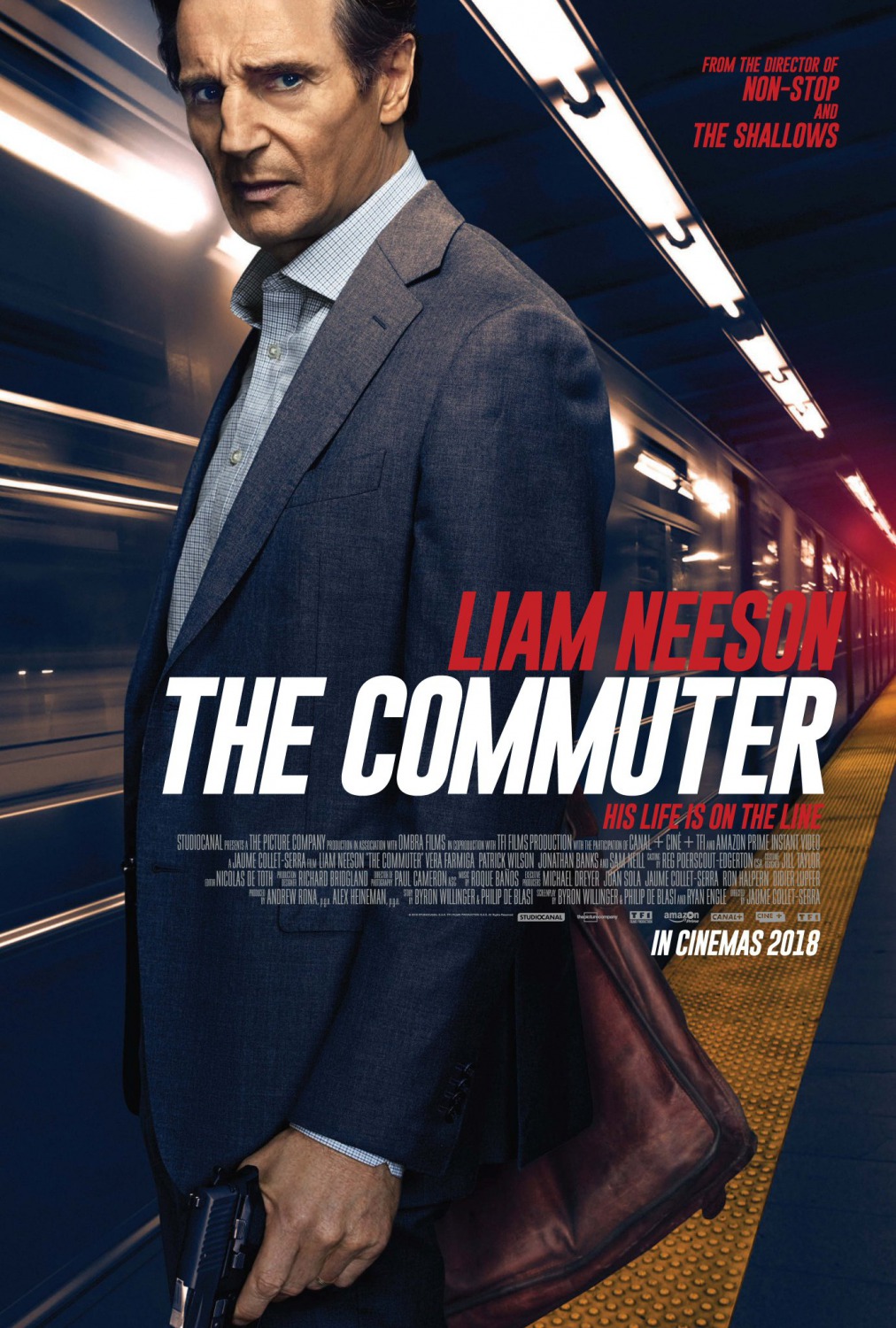 Michael meets up with his friend, Detective Lt. Alex Murphy (Patrick Wilson) of the NYPD, at a bar after work. Michael confesses that he hasn’t told Linda that he lost his insurance job, a job he took after leaving the NYPD. Michael also gets his wallet pickpocketed right before boarding the train home, a delightful cherry on top of a perfect sundae of the day. Ah, but the day isn’t over yet.

A beguiling woman named Joanne (Vera Farmiga) sits across from him and comments on how Michael must be familiar with everyone riding on this train. She tells Michael that there is $25,000 in the train bathroom and another $75,000 if he can identify the person on the train that doesn’t belong. She leaves the train and Michael investigates the bathroom and finds a handbag filled with money. He tries leaving the train at the next stop, but a random teenager gives him an envelope containing his wife’s wedding ring as warning.

Michael turns frantic and calls his friend Alex to check on his wife and son. Joanne calls him on his cell phone and lays out what Michael has to do or else bad things are going to happen. He has to place a miniature GPS tracker on the passenger on the train that doesn’t belong or his wife dies. This passenger is an important witness in an FBI investigation into a police conspiracy. He has to deduce which passenger is the witness all while trying to avoid an assassin on the train watching his every move. Oh, and the plan is for the conspiracy to set poor Michael up for the murder. Will Michael save the passengers and clear his name? Will he throw a bad guy out the window of the moving train straight into another moving train? You’ll have to watch. The Commuter has another ensemble cast of notable stars: Jonathan Banks, Elizabeth McGovern, Sam Neill, Florence Pugh, and Letitia Wright to name a few. I’m sure you like one of those actors.