The Curator of Schlock #382 by Jeff Shuster

Larry and I had dug our way out of a prison in the Canadian province of Saskatchewan. We made our way back into the town of Mooseville. I thought we should lay low, but Larry insisted it was okay. The townsfolk would be too busy in the town square feasting and drinking as it was Canadian Thanksgiving. I had asked him if Canadians eat turkey like we do in the states.

“Some do,” Larry said. “But the residents of this town tend to go for more exotic fare. They eat roast marsupial.” — To be continued.

This week’s Arrow Home Video release is 1966’s Texas, Adios from director Ferdinando Baldi. Hey, this is the same director as Django, Prepare a Coffin. This is not a Django movie, but it was known as Django 2 in some territories. Perhaps, this is because Texas, Adios stars none other than Franco Nero in the lead role.

Nero plays Texas sheriff Burt Sullivan, a lawman who fights for justice, but has a dark past he must contend with. Burt Sullivan also has a younger brother named Jim, a plucky young man eager for adventure. Wikipedia says that even though this western was made in Italy, Texas, Adios plays out like a traditional American western rather than the much grittier spaghetti westerns of the time. Well, I don’t know what movie they were watching, but Texas, Adios is one of the more depressing movies I’ve seen in recent years. No singing cowboys in this one. 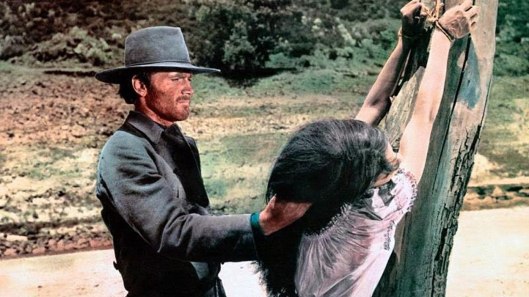 I suppose things are fine in Texas, but Sullivan wants to head down to Mexico to catch Cisco Delgado, the criminal who murdered his father when he was just a boy. Jim tags along and they cross the border. Maybe the Texas we were seeing was the stuff of classic Hollywood westerns, but the Mexico we see in this movie is a horrorscape littered with bodies.

One of the first things we see are the Mexican authorities gunning down some peasants one by one. The town drunk cackles as each of these men gets popped. This is a bad place, but Burt Sullivan is determined to track down Cisco Delgado by bribing every no-good thug and harlot he can find. The closer Burt gets, the more likely he’s to run into Delgado’s men who like to spend their time shooting men and kidnapping pretty women.

Eventually, Delgado’s men capture the Sullivans and bring them before Cisco Delgado, who decides to spare their lives. He even throws a party in honor of Jim Sullivan. As it turns out, Jim Sullivan is his son. Yeah, old Cisco had his way with Burt’s mom right after killing his dad. Naturally, Jim doesn’t take too kindly to this revelation, but I guess that’s what happens when you learn that the man who killed your father is actually your biological father. That reminds me of another movie that will be unmentioned on this blog.

Anyway, it all leads to a very depressing finale in which nobody really gets what they and any justice that wins out feels hollow. Well, if you’re looking to get more depressed during the holidays, check out Texas, Adios!