The Curator of Schlock #388 by Jeff Shuster

Stay away from psychotic hillbillies.

I was working with a Canadian secret agent named Larry. Together, we planned to infiltrate a factory where they slaughtered and canned kangaroos and other marsupials. Larry charged me with freeing the animals while he distracted the guards. He gave me a box cutter and a blowtorch. I was to sneak through the back while he created a diversion.

He showed me some factory blueprints and I pretended to understand, but honestly, who really knows how to read those things?

This week’s movie is 1981’s Just Before Dawn from director Jeff Lieberman. It’s a slasher movie and I’ve been known to cover slasher movies every now and then on this blog. I keep thinking I’m going to run out of these films, but there seems to be an endless supply of them. I guess the bulk were made between 1979 and 1982, probably trying to capitalize on the success of John Carpenter’s Halloween. 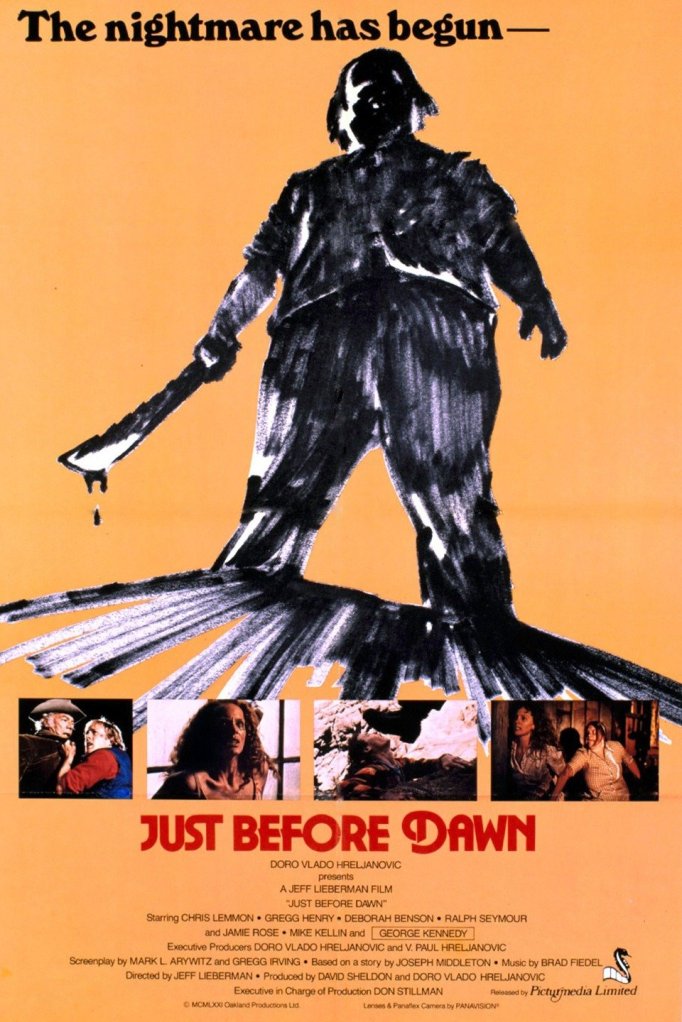 Our movie begins with two tipsy hunters named Ty (Mike Kellin) and Vachel (Charles Bartlett) goofing around in an abandoned church somewhere in the Oregon wilderness. Ty is getting liquored up something fierce when he sees a creepy hillbilly staring down at him through a hole in the roof. When he calls Vachel over, the crazed hillbilly has disappeared. Must have been the alcohol. I’m a little fuzzy on what happens next, but I believe Vachel gets disemboweled and Ty runs for his life.

Next we get a bunch of rowdy college students riding along in their RV blasting Blondie’s “Heart of Glass.” Driving the vehicle is Warren (Gregg Henry) who apparently inherited a lot of land up in the wilds of Oregon. The guy even owns a mountain. I wish I owned a mountain. Anyway, these crazy kids are ready for a weekend of camping, skinny dipping, and drunken frivolity. A forest ranger played by George Kennedy warns them not to go up in those hills, but those “damn, fool kids never learn.” Did you know George Kennedy starred in a made-for-tv movie where he tussled with a rabid skunk?

Warren and his friends run into a drunken Ty who warns them about a demon up in those hills. Ty begs the kids to take him away from there, but they refuse, toss him a couple of sandwiches, and drive off. As they pull away, the maniacal hillbilly donning Vachel’s hunting vest, hops on the back of the van. Ty laughs at their impending doom.

Warren has a girlfriend named Constance (Deborah Benson), the nice and normal one who will probably end up being the “final girl” when all is said and done. There are brothers Jonathan (Chris Lemmon) and Daniel (Ralph Seymour), one of whom is a jokester. Jonathan’s girlfriend is along for the ride too, a redhead with an obsession with makeup and nail polish.

Just Before Dawn is a slow burn. Not one of the college students get murdered the first night. You can’t say they don’t get plenty of warning. Warren learns that he’s a landlord as there are people living up in the mountains and inbreeding may have been taking place over the years. Constance gets a moment at the end of the movie where she confronts the killer and it’s something to behold.

It reminds me of how I was told once to kill a lion if I ever ran into one.

3 thoughts on “The Curator of Schlock #388: Just Before Dawn”